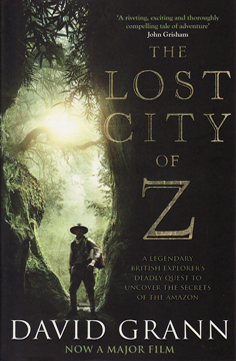 Earlier this week I went to see the new Marvel movie, Black Panther. Unlike James Gray’s movie, The Lost City of Z, which I watched as I read this book, I had not anticipated that I would mention Black Panther when I came to write this review. But aspects of the movie struck me as relevant. Black Panther is set in Africa, in the fictional nation of Wakanda. Wakandan development and technology have been affected by a large meteorite of vibranium, the strongest metal in the world, which struck the nation in its past. The Wakandans have been mining the metal and exploiting its properties for centuries.

At one point in the movie Wakanda is compared to El Dorado, the mythical civilisation of South America, which was reputed to be awash in gold. El Dorado is real, one character says, but it was in Africa, not South America. Vibranium, then, is Wakanda’s gold, and the holographic mirage that envelops the city is the means by which Wakanda maintains an outward appearance to the world of a developing nation.

As I watched the movie I also thought about some of the issues raised in Grann’s book. Grann tells the story of Percy Harrison Fawcet, an English soldier who became an explorer of the Amazon for the Royal Geographical Society. Fawcett began his explorations in the early twentieth century, but Grann counts him as a Victorian explorer, since the ideals which drove his exploration – fame, honour and scientific curiosity – were particularly Victorian in their character, and characterised by the unique individualism of that era, as opposed to the more scientific and professional methods employed in the latter half of the twentieth century by anthropologists like Michael Heckenberger, who forms the subject of a fascinating final chapter of this book.

While Fawcett’s several expeditions to the Amazon were motivated by a belief in a lost civilisation (although he was originally sent there as a surveyor), it was Fawcett’s larger-than-life character which was often the focus of news stories of the time, and it was his personal charisma and mystique that later inspired a cult based upon him, as well as being the spur for other explorers over the years to strike into the Amazon on expeditions to find him after he disappeared in 1925. These ‘rescue’ missions are believed to have claimed as many as a hundred lives.

The preoccupation with Fawcett and his grand exploits was not the only thing that characterised Fawcett’s expeditions as a late Victorian, rather than a twentieth century, venture. The expeditions, undertaken with the imprimatur of the Royal Geographical Society, were predicated upon nineteenth century ideals and techniques. Fawcett was even asked, if he could, to acquire Indian heads for the purposes of phrenological study, a pseudo-scientific discipline now discredited. He declined. Not only that, but his methods of exploration were of that older era, characterised by small groups on foot or by boat. It wasn’t until Alexander Hamilton Rice, a millionaire who took to exploring the Amazon, and seen as a main rival by Fawcett in his quest for the city of Z, that exploration took on a twentieth century flavour, with Rice’s introduced use of radio for communication and a light plane for aerial surveillance.

However, what struck me as I watched Black Panther, was that some of the attitudes to coloured races have not changed a great deal. In Black Panther Wakanda has flourished by hiding from the sight of the western world and assuming the expected guise of black nations in Africa, as that of the developing country, when in truth they are more technologically and socially advanced. In an end-credit scene, King T'Challa speaks at the United Nations, offering his country’s help. He is asked what his country could possibly offer western civilisation. And while Fawcett was actually very enlightened for his time – he refused to fire upon Indians and risked his own life by doing so – he existed in a world that called into question the possibility of an advanced Indian civilisation, much to his chagrin. A lot of opposition, Grann points out, was founded upon biologically determinist beliefs based on Darwin’s writings. These prejudices later changed as arguments for a lost Indian civilisation became discredited, instead, on the basis of environmental determinism – the jungle could not support a large population. The term counterfeit paradise was applied, suggesting a world and culture at odds with the Christian myth of Eden, along with its attendant implications of progress. Grann portrays nineteenth century prejudices and ignorance driving the quest for discovery, and the way that these prejudices shaped expected outcomes and explanations of data. If there was a lost civilisation in the jungle, the reasoning went, it must have been settled by whites leaving Europe. Hence, the fascination with ‘white’ Indians, who turned out to be albinos.

Gray’s adaptation of Grann’s book was entertaining. I thought it was a good movie, although aspects of its ending, which dabbles with some of the mystic theories surrounding Fawcett’s disappearance, would be lost on someone who hasn’t read the book. The fact is, no one knows for sure what happened to Fawcett, but he was probably killed by Indians. The movie tries to achieve a somewhat more hopeful, if somewhat ambiguous, ending for the film.

This is a good place to consider why it’s worth reading this book rather than just watching the movie. The movie focusses upon Fawcett’s career, his family and expeditions, and it does this well. But the book also considers the period in which Fawcett lived, his connection to other explorers, the impacts upon his family after he disappeared, his later impact on the exploration of the Amazon, as well as those issues about how Fawcett’s expeditions fitted into that hybrid period after Queen Victoria died, but still influenced by the age her name defines, well into the new century. Apart from that, it is also the story of the author’s quest: his growing fascination; his sense that he is becoming a Fawcett freak, as others had before him; how he is neglecting his family as Fawcett had; and how he gains insight into Fawcett’s story through his own expedition into the jungle. All this helps to place Fawcett into the wider context of exploration, as well as consider the impact of western governments on the cultures of Amazonian Indians and the denuding of the Amazon rainforest. While the movie necessarily had to tell a more focussed tale, its doing so made it a more indulgent representation of Victorian adventurism.

Besides, there are some interesting little facts that the novel throws up which are outside the purview of the movie plot. For instance, I did not know that after he lost his presidency, Theodore Roosevelt became an Amazonian explorer – was, in fact, a contemporary of Fawcett – and almost died in the jungle. Sir Arthur Conan Doyle, the creator of Sherlock Holmes, was a friend and correspondent of Fawcett's. His Professor Challenger novel, The Lost World, recently reviewed on this site, was in part inspired by Fawcett’s adventures and writings. Ian Fleming, the creator of James Bond, also lost his brother, Peter, who undertook one of the many expeditions into the Amazon to mount a rescue mission to find Fawcett. As late as 1996, James Lynch’s expedition was kidnapped by Amazonian Indians. He was lucky to escape. Apparently, the Brazilian government, as of the time that this book was written, estimates there to be around 60 Indian tribes who have never made contact with outsiders. There’s lots of little snippets like this in the book.

So, was Fawcett’s fabled city of Z real? Click-bait strategies on the internet are annoying – they kind of insult the intelligence – but in this case, you really should read the book to find out. You’ll be surprised what happens next!

Percy Harrison Fawcett
This image of Fawcett is taken from the centre pages of Grann's book. Grann dubs him the last of the individuals explorers