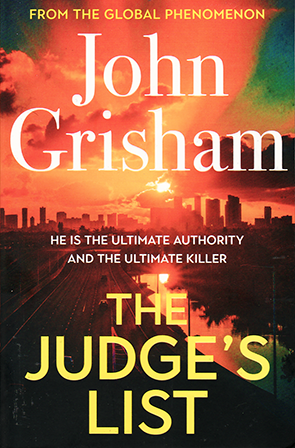 I have read every John Grisham book written, most with fondness. He is the expert of legal dramas and thrillers. The Judge’s List, though, took me in. It was an extreme page turner and the writing and plotting is well beyond his usual level. I never knew exactly what would come next.

Grisham centres his story on the work of Lacy Stolz, who works for the Judicial Conduct Board, investigating wrongdoings of court personnel, including judges. She feels that her career has somewhat stagnated. She is bored by the small-time cases which come across her desk and the amount of work required, given budget restraints. Along with Allie, her long-time partner, an FBI agent, neither are sure of their professional or personal futures. Allie is still working hard, but Lacy can’t see herself remaining on the judicial board much longer.

That is, until an interesting proposition passes her way: a complaint made by someone using an alias accuses a judge of committing not one, but multiple murders over a long period, including during his tenure on the bench. Lacy finds these anonymous accusations interesting, to say the least. Her interest is piqued as she engages in phone conversations with the anonymous woman who has made the claim. She understands she must remain aloof while she assesses the credibility of the claims. At first, Lacy’s gut feeling is that the case isn’t within the jurisdiction of the judicial board, but she agrees to meet with ‘Margie’, nevertheless, and listen to her claims. She asserts that there are a number of murders all with the same MO, but because they have been committed in different states, the police have never linked this serial killer’s cases together.

While Lacy tries to determine whether the information, collected by the informant who is one of the victim’s daughters, along with and her many PI’s assisting her, is truly credible, and whether it is indeed within Lacy’s jurisdiction to pursue the possible complaint, she does some investigating herself. Eventually ‘Margie’ feels confident enough to reveal her true identity as Jeri, daughter to one of the victims. Lacy, having received a promotion when a senior officer resigns, decides to take on the case. Jeri reveals she has been tracking Bannick, the judge, for over 20 years, primarily to convict him of her father’s murder, but also to stop his killing spree which appears to be hastening.

Jeri provides an assortment of case information related to the same scenario, including the calling card of the judge, who she believes to be killing out of revenge. She also reveals she has something in common with the killer: his propensity for patience and planning over many years. It is this trait which has helped her link the well-known and well respected Florida Judge, Ross Bannick, to all except one of the cases.

Jeri has made sure over the years to cover her investigative tracks well, and Bannick thinks he has too, but a simple mistake by both will lead to dangerous consequences.

Will Jeri be able to provide enough information to entice Lacy to continue with the investigation and bring down a sitting judge who knows how police and the law works? Is revenge really Bannick’s motive and if so, why? Will Bannick eventually be caught? Will this case provide Lacy with a renewed outlook for her job and her future life? These are the questions the story raises as it propels you along. Grisham is masterful at this kind of thriller.

I can safely say that I rate The Judge’s List as Grisham’s best fiction book ever. I would certainly recommend it to anyone who enjoys crime or legal thrillers. This one satisfies both beautifully.