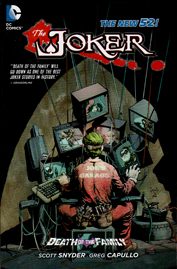 Death Of The Family

Not normally being a reader of graphic novels, I don’t have a lot to compare this one to. I read Watchmen several years ago, and it’s my opinion that that was a more sophisticated book in its use alternative history, it’s layered narrative, it’s multiple perspectives and it’s use of different text types to tell its story. Death of the Family seems more like the comic books I read when I was a kid, although far more adult in its portrayal of violence, the psychotic and sexuality.

The basic story is that The Joker has returned to Gotham after a year’s hiatus. The backstory is that he escaped from Arkham Asylum and cut the skin from his own face. I suppose one would need to have read the previous story to more fully understand why. He now wears the grisly remains like a mask that seems to disintegrate as the story progresses. The Joker is now like something from a horror story: more Freddy Kruger than Caesar Romero. /The story begins with Batman being alerted to the return of the Joker through characters like Merrymanker, who seeks to profit from the Joker-inspired lunatics who anticipate his return. The book progresses through a series of parts that focus on the Joker’s approaches to characters associated with Batman. Each of these parts feel like a story unto themselves, although they are all loosely connected as each character’s connection to Batman makes them the Joker’s target. The Joker’s goal is to take them out, one by one, not to weaken Batman’s defences, but to make him stronger; to remove the lesser heroes who hold him back; to inspire him to become the nemesis the Joker craves for his own amusement.

At times the story was engaging, particularly when it was character driven. Being a graphic novel, however, much of this is driven by action and I found the fight sequences less interesting.

The Joker reminded me of other villains. There is an element of Hannibal Lecter in this Joker, as revealed by the plot as the story progresses, as well as the psychotic intelligence he displays in his inciteful manipulation of Batman’s gang. Naturally, I could not help associating this Joker with Heath Leger’s brilliant performance in The Dark Knight, although this Joker is far more psychotic and unpredictable.

I think the story has similar thematic issues to Tim Burton’s Batman movies. The idea that the superhero is ultimately responsible for creating their villain alter ego (Batman is responsible for the Joker’s deformity, as is the Joker responsible for Bruce Wayne’s parents’ death (and thereby his becoming Batman); Catwoman and Batman both have an uneasy sexual attraction complicated by their alter egos) That idea plays well throughout this work, and is made explicit through illustrations that portray Batman and Joker in split frames, half each, or Batman, Robin and the Joker in a tripartite frame towards the end, suggesting the violence inspired in the heroes by the Joker’s challenge.

The artwork, so essential to the story, is brilliant. It gives the story a hyperreal intensity in the portrayal of character and violence. This is a full colour edition, well-illustrated, with creative use of frames for storytelling. There is a sensuality in the drawings, most obvious in the portrayal of female characters. But the artwork gives a physicality to all the characters, which makes the violence done to them raw and believable, and thereby heightens our sense of the Joker’s boundless insanity.

Overall, I found the book entertaining enough, however I felt there was not the depth I would have expected from a well written conventional novel. These are complex characters, and the writers try to suggest their depth, usually through brief flashbacks, as well as internal monologues represented in boxes across the page. But this seemed a little out of place in a medium which does visuals and action more successfully. I am quite willing to own this as a personal bias for conventional novels, and the kind of character building I would prefer possibly has no place here.