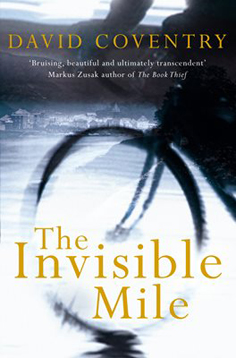 Every year in July people who know nothing at all about bike riding are fascinated by the spectacle that is the Tour de France. It’s a gruelling race over three weeks covering thousands of kilometres, with stages through steep mountainous regions such as the Pyrenees and the Alps. David Coventry’s The Invisible Mile is an imagining of what it was like to actually ride in this great race in 1928, as part of the first non-European team to compete. This was an Australasian team of three Australians and a New Zealander. David Coventry adds an additional New Zealand team member as our (unnamed) narrator.

The writing drags you into the story, it has a slow feel that I found myself immersed, absorbing the feeling of the sheer physical hell the riders go through. In 1928, this is a gruelling ride, brutal in the effect it has. Not only do the riders have to complete the actual ride, they have to do it on heavy, fixed gear bikes - no lightweight alloys and carbon fibres in 1928 bikes, and derailleur gears weren’t available for a few years - while carrying half a dozen spare tubes and parts to change the gear ratio. They need to do their own repairs when required, even to the extent of trying to join a snapped frame back together. A lack of bike lights, and no lighting in the countryside add an additional layer of difficulty in the early morning starts for the mountain climbs, when sometimes they leave town at 2am.

The narrator rides in a drug and alcohol addled haze throughout much of the tour, and from his descriptions of what their bodies are going through, this seems a reasonable choice. At one point he lists the physical problems of just his team, and you wonder why anyone would want to do this to their bodies. All the riders have a mental struggle to keep going as their bodies are slowly destroyed. But those who give up and pull out of the race are thought of as dead. Death is the only excuse to leave.

Apart from the gruelling physical challenge, our narrator is haunted by memories of World War One, and of his brother and sister. In a preliminary race before the Tour, the team competes in a race to Brussels. The narrator pulls out of the race before the border, because he wasn’t ready to ride so far north, not yet. And as the days pass in the actual Tour, he increasingly starts thinking about what is coming soon.

The war memories he is haunted by are not his own, but his brother’s, although at times he claims them as his own. The tour becomes like a pilgrimage for him, to the places his brother spoke of. He is also haunted by memories of his dead sister, and by guilt over her death.

I didn’t find this a quick read. I read it slowly, immersing myself in the story and in the haunted memories of the narrator. I enjoyed the book and would recommend it to anyone wanting a beautifully written story, but I don’t think it is for everyone. It’s not a straight telling of what it is like to ride in a race like the Tour de France. It’s more of a stream of consciousness feel of what it is like to experience the physical torture and the mind-numbing boredom of riding the Tour de France.

View the trailer for the documentary about recreating the route and conditions of the 1928 Tour de France
Widget is loading comments... 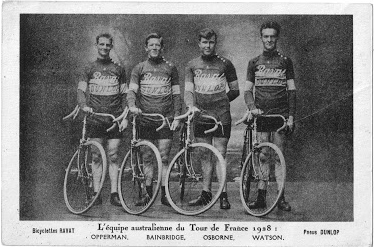