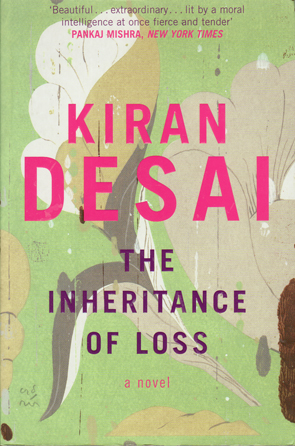 The Inheritance of Loss
Kiran Desai

We accept that for Keats, truth and beauty were synonymous, a symbiotic pairing essential to the soul. However, post-structural discourses like postmodernism have made appeals by modern authors to a ‘truth’ somewhat more suspect. Appealing to ‘Truth’ sometimes suggest a contemporary monotheism; or a monolith into which no light of reason may shine. Which is why it left me bug-eyed and rereading the final sentences of Kiran Desai’s 2006 Booker winner when she used the word. Repeating the sentence doesn’t spoil an enjoyment of the novel, so here it is: “The five peaks of Kanchenjunga turned golden with the kind of luminous light that made you feel, if briefly, that truth was apparent.” That ‘apparent’ suggests a synaptic spark, a brief epiphany that fades with the impulse that urged it. Yet, despite Desai’s novel being based around specific historical events – events spurred by conflicting ideologies of race, culture and economics – Desai is not suggesting a moral centre or high ground upon which her narrative has been based. Desai’s story of the plight of modern Indians to deal with an increasingly globalised world understands that there are levels of culpability in the exploitation of race and culture, but that in a post-colonial world, the exploited are sometimes made victims by their own hopes and dreams, and those who exploit are not always readily apparent.

Desai’s narrative tells the story of India, both prior to and after Indian Independence in 1947. Jemu Patel, an Indian growing up in the 1930s and ’40s is sent to England by his parents to study law. To cover the costs of his education, his parents have arranged a marriage for a dowry with 14 year old Mimi. In the story’s present, 1986, Jemu is a retired judge living in his increasingly dilapidated house as it is consumed by termites. He has long-ago sent his wife back to her family, but now looks after Sai, his granddaughter, after her parents were killed by a bus in Russia. He employs a tutor, Noni, to teach Sai Mathematics and Science, but when Sai turns 16 her educational needs begin to outstrip Noni’s knowledge. Jemu hires another tutor, Gyan, and Sai soon forms a romantic attachment with him. Meanwhile, Jemu’s cook has sent his son, Biju, to America where he hopes he will make something of himself. But without a green card, Biju faces the difficult task of keeping the low-status work he manages to procure, and he is forced from one lowly position to another at a series of restaurants. The Cook’s proud dreams for his son are illusory.

In the background of Desai’s domestic stories is the uprising in 1986 of the Gorkha National Liberation Front (GNLF). The Gorkhas are Nepali Indians living in the northern region of West Bengal. They have been loyal to the British for centuries (known as Gurkhas in the British army). Noni and her sister, Lola, are Bengali and their house, garden and interest in English literature mark them as anglophiles. Jemu Patel was educated in England and finds himself estranged from his fellow Indians when he returns as a district judge. However, Mrs Sen, a neighbour to Noni and Lola, has sent her daughter to America where she has landed a position working for CNN. Pixie, Lola’s daughter, has moved to England where she has landed a commensurate job with the BBC. Their daughters represent different world views and are the basis of jealousy and animosity between them. Meanwhile, Gyan, Sai’s tutor and potential lover, has been swept up in the movement for Gorkhaland’s independence, and his conflicting loyalties threatens their nascent love.

Desai’s ‘truth’ doesn’t reside with any one ideology or culture. Instead, it resides with India, itself, ironically there to be embraced, but so overlayed with its own history and the history of colonialism, that characters struggle to define themselves outside the tenets of colonial or global identities. For Jemu, his identification with a colonial power has left him estranged from his own countrymen:

He envied the English. He loathed Indians. He worked at being English with the passion of hatred and for what he would become, he would be despised by absolutely everyone, English and Indians, both.

Yet India’s independence from England has not simplified the notion of an Indian identity for the younger generation, either. Noni and Lola, looking backwards, still see England as the opportunity to arise from poverty. But many now look to America, where the promise of work and an opportunity to help families is often a sham. While some make it – Biju witnesses ‘real’ Indians in America so westernised that he serves them beef in the restaurants they eat – for many a green card is unobtainable, and the burden of failure is amplified by the unrealistic hopes from those at home, that they might obtain work and sponsor others. When the hopeful turn up in America, the best thing to do is to avoid them.

In the past, England exploited India directly through its occupation and rule. However, despite the post-colonial status of India, a new form of colonialism has arisen. America’s economic promise means the financial exploitation of an underclass of workers is possible, without any explicit promise ever needing to be made. When Gorkha boys from the GNLP come to take Jemu’s guns he keeps for hunting, they demand tea and snacks, a bizarre request they have learned from western films. The global promise of success is pervasive. And Indian identity is still contingent upon western values. When those values fail to live up to expectations, lives are hollowed out and disorientated. Biju experiences this dilemma in America, for instance, where the problem is exacerbated by the dictates of commercialism. He sees his culture commodified in the restaurants in which he works, making traditional identity more nebulous: “What was India to these people? How many lived in fake versions of their countries, in fake versions of other people’s countries?” Biju faces the question: if he continues to work in America, “What would happen? Would he … manufacture a fake version of himself and using what he created as clues, understand himself backwards?”

The problem of defining and maintaining identity and culture are central to this book. Colonialism and globalisation have warped traditional Indian identity, whatever that might have been at one time. Desai, by focussing on a particular conflict in Indian history, has teased at the complexities of the problem. The Gorkhas believe they can reclaim their identity through their demands for a new state carved out of Indian Territory. In this conflict, they seek to portray India as the repressive power. Yet someone like Gyan, who sympathises with the Gorkha cause, is also torn by the aspirational sacrifices made by his family for him. Meanwhile, people like Lola and Noni are left to argue the relative merits of colonial culture against the postmodern global culture embraced by Mrs Sen.

What is left is not ‘truth’, because if it exists, it is gone from sight as quickly as the forever-misty mountain of Kanchenjunga. But words like ‘aspiration’ and ‘hope’ seem to capture it: the aspiration to be like … ; the hope of achieving … Desai’s novel is set mainly in the present of the 1986 uprising (along with the backstory of characters like Jemu), but she seems to suggest that hope and aspiration, while motivational, remain deferred. Sai wonders about the fulfilment of love in the early stages of her relationship with Gyan. She reasons that “love must surely reside in the gap between desire and fulfilment, in the lack, not the contentment”. Sai’s “ache”, that endless anticipation, seems like a metaphor for the Indian identity; endlessly deferred, wanting and hoping, from one generation to the next.

The Inheritance of Loss is not only a fascinating and entertaining read with relatable characters, it is a subtly powerful novel about identity and the modern world. Highly recommended.

This video details the ongoing efforts and conflicts around the question of Gorkha independance and identity
Widget is loading comments... 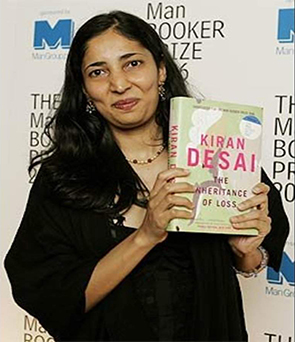 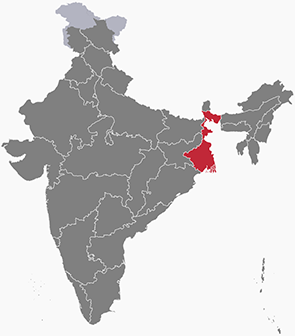 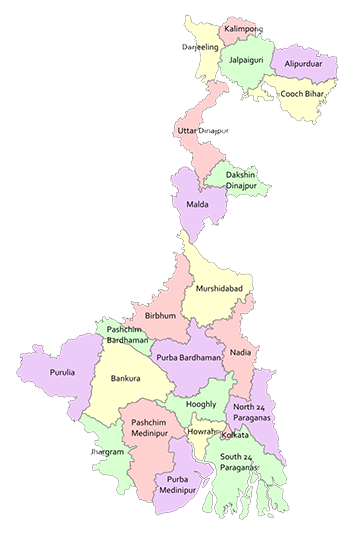 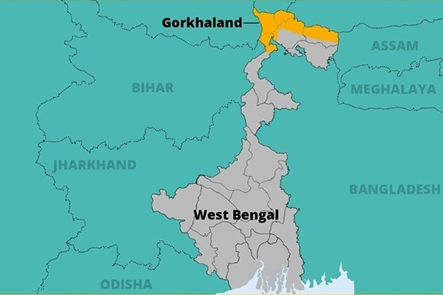 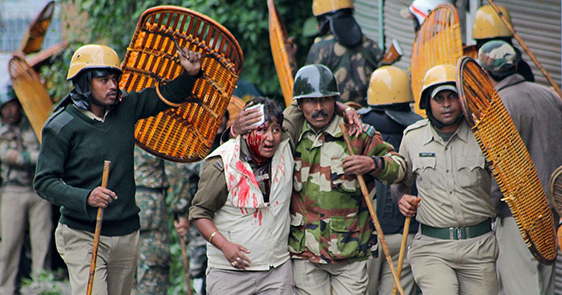 Gorkha Uprising 1986
The Gorkha uprising, depicted by Kiran Desair in her novel, turned violent in 1986. In the novel the Gorkhas's planned peaceful protests are turned to violence when unidentified forces throw rocks at the Gorkha marchers. 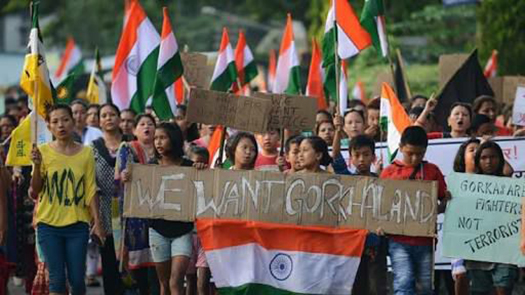 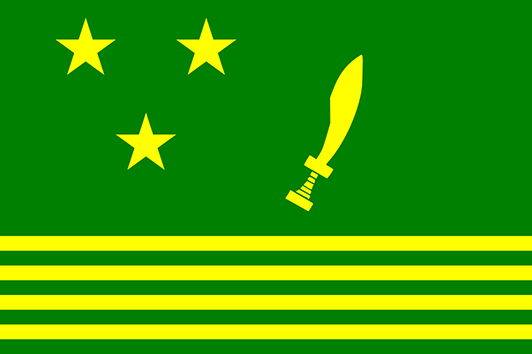 The GNLP Flag
There is no official flag for Gorkhaland. Several designs have been put forward but none have been accepted as official. This flag of the Gorkha National Liberation Front depicts a Gurkha knife, used by Gurkha soldiers in the British army.