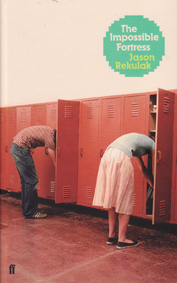 I don’t know what made me pick up this book in the book store. It certainly wasn’t the cover. The Australian cover is pretty uninspiring compared to the American cover shown on the website. There was a shelf of The Impossible Fortress stacked near the front of the book store. I guess that’s what it was. It was enough to get me to pick up the book, and that was enough to get me to buy it. Because I read the blurb and thought that this book was ticking some boxes for me:

By 1987 I was at university, so I’m a few years older than the characters of this novel. But in 1982 I was in year 10 at high school and my mother relented and allowed me to buy a Vic20, the predecessor of the Commodore 64. The Vic20 had about 3 and a half kilobytes of memory. That’s where computing was at during this time (I think the original IBM PC had about 16 kilobytes) Until I could afford the cassette player, getting the computer to do anything meant owning a cartridge with a preloaded game I pushed into the slot at the rear of the computer, or I had to type out a complete program each time I wanted to play a game, which would be lost the moment the computer was turned off. I was a little jealous when a friend got a Commodore 64 shortly after, complete with a disk drive and a dot matrix printer.

It’s these kinds of memories of early home computing experience that are impossible to convey to my kids. But part of the joy of a story like this was that it transported me back to that time when so many things seemed possible: when I told my art teacher I could use my computer to produce computer art, for instance, and he gave me a go and somehow, I did it. That’s the kind of spirit shown by Mary and Billy, the two protagonists of this story, existing in an era when computer programming wasn’t just the purview of experts.

I read this book in two sittings. It was a joy to read. The characters were believable and relatable. The plot begins with the publication of a Playboy magazine featuring Vanna White, the Wheel of Fortune host who turned the letters on the show. Billy and his friends, Alf and Clark, naturally want to see this magazine. There’s a charming innocence about their desire, adeptly conveyed by Rekulak:

It’s the most incredible thing I’ve ever seen … She’s sitting on a windowsill, like this? And she’s leaning outside. Like she’s checking the weather? Only she’s not wearing pants!

Exchanges like this have an authentic charm. I was also amused by Billy’s attempts to program a strip poker game called Strip Poker with Christie Brinkley in which the object of the game is to win poker rounds against the putative Brinkley to make her forfeit her clothes, only to reveal the most unerotic computer representation of her naked form that you can imagine. It kind of reminds you how desperate things can be when you’re fourteen.

Billy is a well-rounded, relatable character, despite this predictable desperation. He lives with his mother under fairly dire financial circumstances, he feels alienated from most of his school cohort, he’s extremely intelligent, but is thought to be fairly dumb by the school system which fails to stimulate him. He’s failing school.

But Billy remains a positive character despite much of what transpires in the story. For the reader, there’s a lot to smile about, especially at the inept lengths the three boys go to, to acquire a copy of the magazine. But the book avoids simplistic caricatures. Billy’s relationship with Mary is complicated by any adult standard, both in his feelings for her, the moral ambiguities the relationship raises for him, and what he learns about the world of adult relationships. Mary, likewise, has conflicting emotions and responses that confuse Billy and strain their relationship. Even the villain of the story, Tyler Bell, is a satisfying character of more than one dimension.

Naturally, the story is about much more than three boys stealing a girlie magazine. The magazine is the catalyst for their adventures and problems, and I wouldn’t hesitate to say that the story isn’t about the magazine at all. The novel is essentially bildungsroman, which is illustrated nicely in a moment towards the end of the story when the three boys trespass in a girl’s Catholic school, and Billy realises that none of these girls of his fantasies have the bodies or demeanour of the pin-up babes adorning his wall at home:

They were too short or too tall, too fat or too freckled, too sweaty and too flushed and too imperfect. But they were real, they were gloriously alive – laughing and shouting and sprinting across the field. I watched them in quiet astonishment and realized that the rumours about St.Agatha’s were true: these were the most beautiful girls I had ever seen.

The journey of maturation is characterised by the efforts of the three boys to attain their simple goal, which is laughable, cringeworthy, entertaining, but ultimately, questionable. And while the end of the story may be a little predictable, there is such a warmth to the characters, that it’s just how you want it to end.

Each chapter is headed by about ten lines of computer code from the Commodore 64. It’s a nice touch, a piece of nostalgia for someone of my era, although most of the coding, while looking familiar with its array of POKEs and conditional statements, means little to me now, beyond the chapter titles which reside in the REM statement of each printout. I thought this was a nice touch as it allowed the game they develop to become a metaphor or running commentary on their personal circumstances in the story. Rekulak originally intended the code to form the game developed by Mary and Billy in the story, to be used with a Commodore 64 emulator, but in the end the game was placed on the author’s website. I’ve provided a link to the game at the right of this review.

This is a nice light read which should appeal to anyone who remembers their teenage years with even the smallest amount of embarrassment. Also anyone, like me, who enjoyed this old technology, will probably understand the obsession for the old computers. But a book for anyone really!

The Impossible Fortress Game
Click on the image to play the game Mary and Billy, the main characters, are meant to program in the story.
Click here to visit Jason Rekulak's website