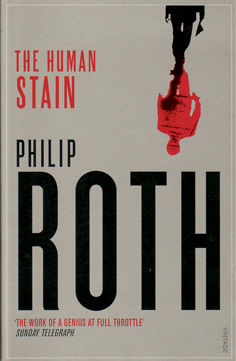 Philip Roth often writes about characters facing traumas, whose lives are in the spotlight, whose values are questioned and for whom denouement can only be achieved through cathartic tragedy. Yet in these larger than life characters one finds that Roth’s real subject is America. His canvas teems with personal stories, told in detail, and deliberated upon and obsessed over with the same mania that drives his tortured protagonists. But whether it be the pain of dealing with a home-grown terrorist in the family, as in American Pastoral, the scandalous life of a sexually deviant puppeteer in Sabbath’s Theatre, or the more prosaic personal struggle of his long-time protagonist over several books, Nathan Zuckerman, Roth is probing American values and the meaning of America.

In The Human Stain Roth once again engages Nathan Zuckerman to tell the story of Coleman Silk and his lover, Faunia Farley. Coleman befriends Zuckerman after a terrible personal downfall. After a long career as a college professor, having reformed the college as dean, and then having stood down to continue purely as an educator in the last years of his career, Coleman’s reputation has been destroyed and he has resigned in disgrace. His crime? Having asked the whereabouts of two girls who have not attended class all semester. Do they exist, he asks, or are they spooks? The two girls in question soon make an appearance at the dean’s office, crying racial vilification because they are black and spooks is an old derogatory term. Never mind that Coleman’s meaning was clear. He has political enemies. For the reader, Coleman is a man with a past so bizarre, that this very accusation drips with more irony and venom than anyone can know or Coleman can endure.

This is a simple tale that gains power by exploring Coleman’s associations, his family history, and by the complex meditations upon the key stories which the reader is drawn back to time and time again to consider further details, nuances and meanings of identity and the meaning of a life. While Coleman’s fall is an outrage, its outrageous perpetrators also have a story. Roth never reclines comfortably into the lazy storytelling that requires us only to identify good and evil. All his characters are complex, have self-justified motives, and all are questionable. From Faunia, Coleman’s 34-year-old lover, who is beaten by her ex-husband and suffers a terrible tragedy of her own, yet ultimately holds a secret, to Les Farley, Faunia’s ex-, a Vietnam War Veteran, perhaps even a hero, who returns home a broken man, to Delphine Roux, a woman we are meant to despise for her part in bringing Coleman down, but with whom we must also sympathise for her loneliness, isolation and professional and personal vulnerabilities.

In each aspect of the story, through his various characters, Roth explores a singular problem that is also a question of the American experiment. Can a person divest themselves of their past? Is it possible to define oneself on one’s own terms? Central to this dilemma is Coleman Silk himself. As a white college professor teaching the classics for over forty years and now accused of racism, the reader is presented with the irony that Silk is in fact a black American who has assumed the identity of a Jew to hide his true ancestry. He has taken a white wife, to whom he never reveals his secret, has raised his children as white, has estranged himself from his black family and his past, and from the black community and its struggle for equality. By doing so Coleman has either perpetrated a terrible psychological fraud against himself and is guilty of cruel indifference, or is to be admired for unshackling himself from a history that would only have defined him against the man he would rather choose to be:

All he’d ever wanted, from earliest childhood on, was to be free: not black, not even white – just on his own and free. He meant to insult no-one by his choice, nor was he trying to imitate anyone whom he took to be his superior, nor was he staging some sort of protest against his race or hers. He recognised that to conventional people for whom everything was ready-made and rigidly unalterable what he was doing would never look correct. But to dare to be nothing more than correct had never been his aim. The objective was for his fate to be determined not by the ignorant, hate-filled intentions of a hostile world but, to whatever degree humanly possible, by his own resolve. Why accept a life on any other terms? (page 121)

Each of the major characters has a similar story. Delphine Roux, who appears to be Coleman’s nemesis at the college, has likewise unburdened herself of family and country by moving from France to America in search of a career and independence.

I will go to America and be the author of my life, she says; I will construct myself outside the orthodoxy of my family’s given, I will fight against the given, impassioned subjectivity carried to the limit, individualism at its best… (page 273)

But there is a question of personal cost, and of moral culpability. For Coleman, who took up boxing in his early teens and was never defeated in the ring, the moral question of cutting loose his family is dealt with in an all-to-easy metaphor:

But only through this test can he be the man he has chosen to be, unalterably separated from what he was handed at birth, free to struggle at being free like any human being would wish to be free. To get that from life, the alternate destiny, on one’s own terms, he must do what must be done. Don’t most people want to walk out of the fucking lives they’ve been handed? But they don’t, and that’s what makes them them, and this was what was making him him. Throw the punch, do the damage, and forever lock the door. (page 139)

The question of self-determination is represented through other characters, too. Lester Farley, psychologically damaged by the war is either a hero for his service or a man turned villain as a result of it. We follow his struggle to unburden himself of the past, but his ambivalence as to whether he has ever actually killed someone in one of his drunken fugues leaves us somewhat cold towards him. Mark, Coleman’s long estranged son, is a somewhat sympathetic character, but Zuckerman judges his hate as a petty, indulgent cycle he feeds, pretending to desire a perfect, but impossible, moral consummation.

This is the problem of the human stain. Zuckerman chooses to illustrate it through the story of a crow, hand raised by humans, that is rejected by other crows because it has lost its crow-ness. It doesn’t speak the language of other crows. In Faunia’s understanding, the crow has been stained by its associations with humans. But the stain is deeper than just the bird’s association. The stain is what is left unavoidably on the world by humanity just by living: we leave a stain, we leave a trail, we leave our imprint. Impurity, cruelty, abuse, error, excrement, semen – there’s no other way to be here. (page 242)

To this extent, we never escape our past, our associations and the judgments passed upon us.

What raises Roth to the level of a great writer, capable of chronicling and questioning the American zeitgeist, lies in his ability to place this story within a particular historical context, but then to see that moment through the prism of American history and its ideals. The particular historical context of the novel is 1998, the period of Bill Clinton’s impeachment, and though never explicitly mentioned, the moment when the world focussed on that stain on Monica Lewinsky’s blue dress. Roth’s narrator, Zuckerman, opens the story with that context – the moment when he imagines a huge banner draping the White House reading A HUMAN BEING LIVES HERE – and returns to it throughout the novel, particularly through the invective of Lester Farley (…that scumbag son of a bitch getting’ his dick sucked in the Oval Office on the taxpayer’s money…), thereby providing an historical counterpart to Coleman’s own vilification.

The Human Stain is a great novel not only because it provides convincing psychological insights and a story as detailed and as difficult as life. It is great because it interrogates the American experiment – its ideals of equality, the notion of the pursuit of happiness and the American dream – for just as presidents must be held to account, so too must a country’s history be held against the ideals upon which a country is founded.

Ernestine, Coleman Silk’s sister, illustrates this through a story she relates to Zuckerman of Matthew Henson, a black man who reached the North Pole before Robert Peary, but whose achievement has been elided in historical records. And Dr Charles Drew, another black man, who discovered how to prevent blood from clotting so it could be banked, but died bleeding to death because his nearest hospital would not take coloured people.

These are stories denied by not only by Coleman Silk’s self-determined life, (himself made tragic by the ignorance of others, while eschewing his black heritage in favour of the Greek texts he taught, which ultimately became a template for his own fate) but by American history.

And like Coleman Silk, America’s greatness lies in its ideals but its tragedy is in its history. Philip Roth’s story supports this insight:

To become a new being. To bifurcate. The drama that underlies America’s story, the high drama that is upping and leaving – and the energy and cruelty that rapturous drive demands... (page 342)

This is why I would highly recommend this book.

It was in the summer of 1998 that my neighbor Coleman Silk - who, before retiring two years earlier, had been a classics professor at nearby Athena College for some twenty-odd years as well as serving for sixteen more as the dean of faculty - confided to me that, at the age of seventy-one, he was having an affair with a thirty-four-year-old cleaning woman who worked down at the college. Twice a week she also cleaned the rural post office, a small gray clapboard shack that looked as if it might have sheltered an Okie family from the winds of the Dust Bowl back in the 1930s and that, sitting alone and forlorn across from the gas station and the general store, flies its American flag at the junction of the two roads that mark the commercial center of this mountainside town.