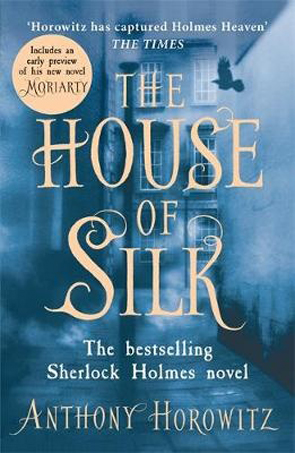 The House of Silk
Anthony Horowitz

Reviewed by: Toriaz
Category: Crime Fiction
Date Read: 21 September 20198
No. Pages: 389 (405 including Horowitz on writing The House of Silk: Conception, Inspiration and the Ten Rules)
Published: 2011

No, the events which I am about to describe were simply too monstrous, too shocking to appear in print. They still are. It is no exaggeration to suggest that they would tear apart the entire fabric of society and, particularly at a time of war, this is something I cannot risk.

Earlier this year I read Anthony Horowitz’s The Word is Murder. At the time I thought the relationship between Horowitz and Hawthorne was reminiscent of that between Watson and Holmes. So when I found out that Horowitz had been authorised by the Conan Doyle estate to write a new Holmes story, I suspected he would do a very good job. And now that I’ve finished reading The House of Silk, I can confirm that he has indeed done a great job.

Horowitz has created a book which keeps the feeling of Doyle’s writing without copying the style exactly. Modern writers simply cannot write the same way as someone from the late nineteenth century. Somehow, when they try, what they write jars in some way with me. I’ve read other ‘modern Holmes stories’, such as The Seven Percent Solution by Nicholas Meyer, and I just didn’t think it worked. Perhaps what jars with me is the way most of these stories include prominent contemporary figures such as Sigmund Freud in Meyer’s book, or Tchaikovsky in the movie The Private Life of Sherlock Holmes. So I appreciated that Horowitz opted to write in a more modern style, but with the flavour of Doyle, and that he kept true to Holmes’s world, without adding in real world people from the time, or investigating real crimes such as Jack the Ripper (as Mark Sohn did with Sherlock Holmes and the Whitechapel Murders).

I would rank Horowitz’s pastiche up there with the excellent BBC series Sherlock. Sherlock uses ideas from the original stories, adapted to a modern world, giving a feel that if Doyle was alive today and still writing, these would be the type of stories he would be writing. Similarly, Horowitz’s writing seems to have the same flavour as that of Doyle’s, without copying it exactly. This is what I mean by the flavour of Doyle.

The conceit for this book is that Watson wrote it sometime around 1915 or 1916, during the First World War. Holmes has recently died and Watson is grieving for his lost friend. He finds writing to be therapeutic and decides to finally write a record of a case he and Holmes investigated in 1890. He has never previously mentioned this case in any of his writing, as the story was too shocking to be read. He feels this is still true, but proposes to leave the document in a safe deposit box for a hundred years, when perhaps future readers will be more inured to scandal and corruption than my own would have been.

This is actually two interwoven stories, concerning the ‘House of Silk’ and the ‘Man in the Flat Cap’. Holmes’s investigation into the Man in the Flat Cap leads him to discover the evil that is the House of Silk and makes him determined to expose and destroy it. There is plenty of action and intrigue, enough to keep me turning the pages to find out where the story would head next. The story is much darker than was normal in Doyle’s stories, and I don’t think the subject matter is one that would have been discussed publically in Doyle’s day. I think the body count was higher in this book as well. Unlike the BBC’s Midsommer Murders, which Horowitz was a writer for in the early seasons, Doyle didn’t tend to have too many murders. This book, however, ended up with a fair few bodies piled up.

The story opens with Edmund Carstairs, art dealer, consulting Holmes when he feels threatened by a mysterious man who has a scar on his face and who wears a flat cap. Carstairs tells a story of valuable works of art sold to an American millionaire, and of the accidental destruction of the paintings during a train robbery en route to Boston. The Flat Cap gang is responsible for the train robbery and make a clean getaway, but face quick retribution when the millionaire hires a detective to track them down. Most of the gang is destroyed, but one member escapes, and it is this gang member that Carstairs feels is now seeking revenge upon him.

The story rapidly progresses from the identification and pursuit of the man in the flat cap, to the death of a young boy, then to a visit to an opium den and to another death for which Sherlock Holmes, himself, is accused of murder. Eventually it leads to the tracking down of the House of Silk. And finally, the story comes full circle back to Carstairs to wrap up the original problem and tie the two stories together. Altogether a satisfying adventure romp, with some brilliant deductions from Holmes, and some cunning disguises where, typically, Watson cannot identify his closest friend even when conversing with him.

One thing I liked about this story which was a bit different to Doyle’s stories, was the way Horowitz humanises Holmes and Watson. Holmes is deeply affected by the death of Ross, and feels himself responsible. He starts to consider the use he puts his army of street urchins to, and asks Watson Would I have allowed a young boy to stand alone outside a hotel in the darkness had it been your son or mine? The older Watson, narrating the story during the First World War after Holmes’s death, starts to regretfully think of the social conditions among the poor and of the problems of over-crowding and of the abandonment of children in London, things he never considered earlier.

This book is highly recommended for any fans of Sherlock Holmes. I would also recommend it to anyone who isn’t particularly into the Holmes stories, specifically, but who likes a well-crafted and page-turning mystery.

Show Holmes a drop of water and he would deduce the existence of the Atlantic. Show it to me and I would look for a tap. That was the difference between us 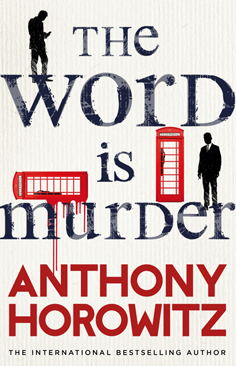 The relationship between Watson and Holmes in The House of Silk is similar to the relationship Horowitz creates between his fictionalised self and Hawthorne in The Word is Murder. Click on the cover to see reviews of that book. 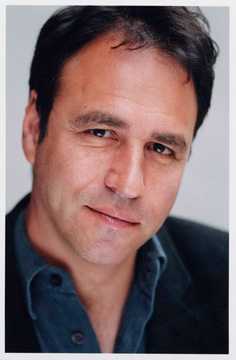