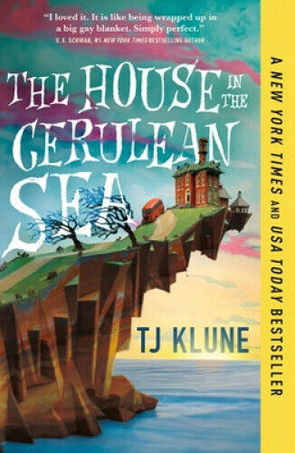 The house in the title of T J Klune’s fantasy is an orphanage controlled by the Department in Charge of Magical Youth (DICOMY), located on an island of the coast of a very remote village. The orphanage is run by the mysterious Arthur Parnassus, with the assistance of the island’s sprite, Zoe. The children in the orphanage are Talia (a gnome), Phee (a forest sprite), Sal (a shapeshifter who changes into a pomeranian), Theodore (a wyvern), Chauncey (no one is sure what he is, but jellyfish might be involved) and Lucy (short for Lucifer, the antichrist). There’s pretty much a Miss Peregrine’s Home for Peculiar Children vibe to the whole place, except these children are registered and regulated by the government who want to ensure the children never use their powers. Into this world comes Linus Baker, a case-worker for DICOMY, sent to investigate the operation of the orphanage to determine if it should be shutdown. Linus is middle aged and lives a lonely life, surrounded by routine and drudgery. His only pleasures are the sunflowers he grows at his house and his collection of records from the 1960s. Although this book can be found in the adult SFF section in bookshops, it reads more like a YA novel.

The House in the Cerulean Sea has been all over my social media feeds. For the last year I have been seeing it recommended by everyone. It was actually a shock earlier this week to see a negative comment about it in a Facebook reading group. I hadn’t seen that before. The hype for this book has been incredible. Apparently this book is the best book ever written and you are a monster if don't fall in love with it. At least, that’s what I read. For it appears that I am, apparently, that monster, as I don't think the book lives up to its hype. I had high hopes for it as I began. I was in the mood for something sweet and endearing and soothing. And yes, the book actually is sweet and endearing and soothing, but in a saccharine way. I felt like my feelings were being manipulated by the writer; that I was being shown how perfect the world could be if we just followed the principles embraced on the island. Readers are meant to go all gooey with feelings for the children who are no different to any other children, really, despite being magical, and who just need to be loved and understood and accepted for who they are.

It’s all positive in the story. There are only a few problems faced by the characters in the book, and they are all easily overcome. A mob of protesters waving placards are persuaded within a few minutes that they are misguided and that their prejudices are unfounded. No one is ever in any actual danger. Love and acceptance can overcome any obstacle, you just need to believe. The orphanage is threatened with closure by the Government department that oversees/regulates magical children, for instance. But this is easily prevented by one low level employee standing up to the upper management and telling them their principles are prejudiced and wrong.

I was about halfway through the book when I saw that negative comment on Facebook, and because I’d already been thinking that this book was overhyped, I read the thread to see if my feelings were shared. And that’s when I discovered that the book had been inspired by the Canadian residential schools. Klune is open about this, as can be read here. By one of those weird coincidences that seem to occur all the time, I had only just become aware of the residential schools a few days earlier. I’d read an article in a local paper about the discovery of a mass grave at one of these schools. I’ve now learned that these schools operated in Canada, taking indigenous and first nation children from their homes and taught that their own culture had no value. The forcible separation from their families was traumatic for the children and a form of cultural genocide. The children were forced to convert to Christianity and not allowed to speak their native languages. Many of the children were beaten and verbally abused and up to 6,000 are said to have died. From the sound of them, they are similar to the missions that operated to remove Aboriginal children from their families in Australia, leading to the ongoing trauma of what is known here as the Stolen Generation.

And Klune has taken the idea of these residential schools, sugar coated them and used them for his sweet and whimsical fantasy? That just strikes me as wrong on so many levels. I get that the message that kindness is something we need in the world, especially after what everyone has lived through over the last 18 months and more, but that doesn't justify taking the whole history of these schools and saying that really they would have been okay if only the people running them were just a bit nicer, and had been kinder to the children. Colson Whitehead took a similar background story as the basis for his The Nickel Boys and used it demonstrate the injustice of systemic racism in the US. Klune has decided to avoid making any real comments on the impacts of the residential schools; rather he chose to romanticise the whole idea of them.

Yes, there is a magical escapist feel to this book. Yes, it is whimsical and sweet, and all the children really are lovable once we look beyond their appearance and strange abilities. Yes, just like all other children, all they really need is someone to look after them properly and care for them. Yes, there is a sweet gay romance in the story to add to all the other feel-good elements. And if you don’t mind being told what your opinion about prejudices and judging people based only on how they are born should be, you will probably love this book and agree that I am a heartless monster for not thinking that this book is even better than sliced bread. Or maybe, like me, you might think that the co-opting of a terrible historic reality into a feel-good fantasy is just wrong, especially when it is done in such a manipulative tugging-at-the-heartstrings manner as this was. 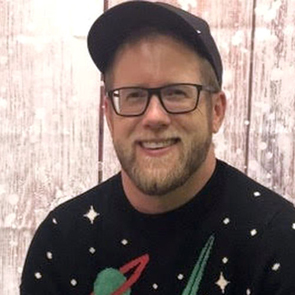 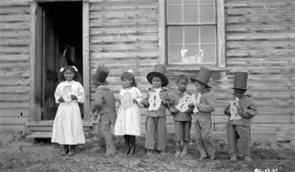 He was about to leave through them front door when he paused at a burst of laughter coming through the kitchen. Against his better judgment, he tiptoed toward the sound. He paused by posters nailed to the walls, the same messages that hung in all the DICOMY-sanctioned orphanages he’d been to. They showed smiling children below such legends as WE’RE HAPPIEST WHEN WE LISTEN TO THOSE IN CHARGE and A QUIET CHILD IS A HEALTHY CHILD and WHO NEEDS MAGIC WHEN YOU HAVE YOUR IMAGINATION?

He stuck his head in the kitchen doorway.

There, sitting at a large wooden table, was a group of children.

There was a boy with blue feathers growing from his arms.

There was a girl who cackled like a witch; it was fitting seeing as how that’s what her file said she was.

There was an older girl who could sing so seductively, it brought ships crashing onto the shore. Linus had bailed when he’d read that in her report.

There was a selkie, a young boy with a fur pelt resting on his shoulders.

And Daisy and Marcus, of course. Sitting side by side, Daisy exclaiming over his tail cast through a mouthful of biscuit. Marcus grinned at her, his face a field of rusty freckles, tail resting on the table. Linus watched as he asked her if she would draw him another picture on his cast with one of her colored pencils. She agreed immediately. “A flower,” she said. “Or a bug with sharp teeth and stinger.”

Linus left them be, satisfied with what he’d seen.

He made his way to the door once more. He sighed when he realised he’d forgotten his umbrella once again. “Of all the -“

He opened the door and stepped out into the rain to begin the long journey home.