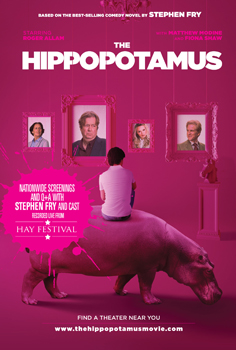 There’s this attitude that really bugs me, the assigning of a miracle, or the hand of god, to an act that I, as a scientist, would attribute to science or medicine. The ‘praise be to god, my son has miraculously come through his surgery and will live’. No thanks to the skilled surgeon and the rest of the medical care who probably worked for hours, it all due to god’s work. Some people just need the emotional salve that their imaginary friend provides, and are not willing to accept rational explanations for the world. Or that a skilled doctor should be relied on more than any faith healer who will probably turn out to be a snake oil salesman.

While this book is on the surface a simple humorous farce, it also explores this idea of belief and delusion, and shows how much people want to believe that miracles can occur in the world; that sceptics, who have a logical explanation for what has happened, will always have a hard time fighting against this desire to believe and that exponents of alternative medicine will always be willing to embrace a miracle cure, no matter how ridiculous it may seem to a rational observer.

Fry, who is a staunch athiest, touches on the subject of faith healing in The Hippopotamus as an effective satirical barb, to make this point.

When I first started reading this book, it put me in mind of a P. G. Wodehouse story. This rapidly got revised to a P. G. Wodehouse who has suddenly developed an extremely potty mouth. Anyone with delicate sensibilities and a dislike of swearing might do well to avoid this book, as Fry’s characters all employ fruity language throughout the book, and have no shyness about describing their sexual habits. I even learned a new word. I had to look up what ‘felching’ was. I probably could have lived quite happily not knowing that particular term.

Although the womanising, has-been former poet, now sacked drama critic, narrator, Ted, is a very different person to the hugely successful and openly homosexual Stephen Fry, I couldn’t stop hearing Ted speak in Fry’s voice. Ted might be sour, old, cantankerous beast as the back cover of my edition describes him, but he’s also very funny and it turns out, a very understanding and sympathetic person. And the one voice of reason in a country house party that is growing more deluded and hysterical with each passing day.

This is a highly entertaining romp, one I think most people, would enjoy reading. As long as they can cope with this one extremely awkward scene, which is central to the premise of faith healing in the plot. I’m not going to describe this scene, because it would be a major plot spoiler, but it was a shock for me when I first read it. And it’s meant to be a shock. But it’s important to the plot, because after this scene, you suddenly see where the entire mess is heading and Fry's satirical intent. And you wonder how he is ever going to resolve it. And he does resolve it all. Maybe not a completely happy ending, but a satisfying one.