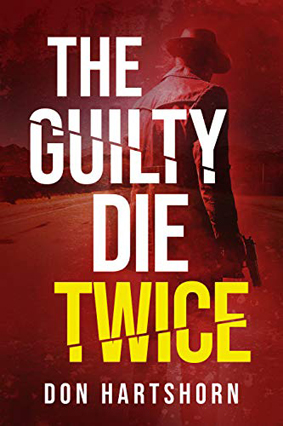 Don Hartshorn’s The Guilty Die Twice marks a change for me. I don’t normally read legal thrillers. But we were approached by TCK Publishing.com to review two of their books and I agreed to read this one.

Hartshorn explains on his website that this novel was inspired by a Dallas prosecuting attorney who suggested that capital cases might seem murky and vague from a layman’s view, even though the facts were usually very cut and dried. The attorney wanted to make a television show that explored that hazy area but died before the project could be realised. Hartshorn explains that this book was an attempt to achieve that vision.

The plot centres around the dysfunctional relationship of two brothers, Jake and Travis Lynch. Ten years ago, they became estranged over a capital case which results in the execution of Reilly Sutton. Travis, whose conscience forced him to act against his brother in the case, is heading back to Texas at the beginning of the novel to witness Sutton’s execution. Christine Morton, a political reporter professionally involved with the careers of both brothers, is also attending the execution. It would seem to be the end of a chapter in Travis’s life.

Yet things take a turn when two young men are shot and killed during a drug deal gone wrong. Peter Carlisle and Shane Ablin are from privileged white families, and Peter’s father, David, ignorant of his son’s drug dealing, is willing to use his political influence like a bully to press for a quick prosecution and the death penalty. Jake Lynch has become District Attorney since the Sutton case and is willing to press for the death penalty of Sam Park when he is named by a survivor of the shooting. Jake’s brother, Travis, however, is willing to put aside his own financial difficulties to act on behalf of Sam at the request of his family. And so, the scene is set for conflict between the two brothers, since they must meet again for the first time in ten years.

I had mixed feelings about this book.

To begin with, it has some strong features. The writing is competent, focussed on dialogue and action, and features some scenes in which it is enlivened by clever metaphor. There’s a scene in which Jake’s character and motivations are cleverly telegraphed in a game of pool. Hartshorn offers an extension to this scene on his website, but he was right to remove it for the book. Overall, however, the book is most successful in its plotting and the structure of the story. Scenes move deftly between the present and past, and the Sutton case – the revelations of the case and the slide towards estrangement ten years ago – act as counterpoints for the issues in the current-day plot very well. If the Sutton case was a story about how the brothers were torn apart, the Park case (or the ‘Rich Kid Murders’ as the press so charmingly label it) represents an opportunity to overcome old animosities and heal wounds. There are other symmetries in the story which also work well. An ambitious lawyer in Jake’s office, Bobby Velasquez, pursues his career as aggressively as Jake once did, with a clue to the moral pitfalls Jake must avoid. And the ‘Rich Kid’ appellation suggests the systemic poverty that is often the catalyst for crime, and the legal forces that oppose rather than ameliorate those problems. Peter Carlisle turns up to the drug deal with no intention of paying his poor suppliers. For Sam Park, the deal is fraught with many complicated emotions about class and privilege which will affect his actions and motivations in surprising ways. The system is primed to protect the interests and reputation of one family, but not the other.

Other competing interests enliven the story as well. Travis left the family law business ten years ago and now he and his wife struggle financially as he prioritises his conscience over money. With too much pro bono work and a baby on the way, Travis is under pressure to take paying customers to support his family. Sam Park’s poor Korean family are unlikely to be money makers, especially since Travis was never paid for defending Sam’s older brother, Charlie. Yet Travis finds comfort in his self-perception. He sees himself as the antithesis of his successful brother who pushed for the death penalty in the Reilly Sutton case, and is willing to do it again for Sam Park.

So, there are tensions within the book – between privilege and class, and poverty; and between competing notions of how the law should serve the community. It’s a good basis for a novel and Hartshorn balances the different story elements well.

But Hartshorn claims he is interested in that hazy area of capital cases, and I don’t think he achieves that here. The issues the narrative raises around the case, itself, aren’t tricky legal dilemmas or obscure points of law readers will be surprised by. Rather, the real drama occurs in the relationship between Jake and Travis. Circling them are satellite characters who inject a greater degree of tension into the relationship. There is Christine Morton, for instance, more a plot device than a character, who serves to pick at the scab of their past or introduce information that heightens the drama. Or David Carlisle, who pressures Jake towards prosecuting a capital case, thereby setting him on a course for conflict with his brother. But the conflict between the brothers misses its potential and devolves into obvious and disappointing moments, or is resolved by gratuitously placed deus ex machina. On the first point (since discussing the second would require a plot reveal) the conflict between the brothers is expressed in a physical fight at a family reunion. There are some potentially good moments when the fists stop flying. Jake, struggling to articulate his position, expresses in his feelings in mixed metaphors:

There’s no more frontier, Travis. No place to put criminals like this, no wilderness to make them walk into. People like Sam Park have proved they can’t operate by the rules of modern society, and they’re never going to adapt. They’re predators. They’re cancer. So we have to cut them out.

Jake further argues the difference between capital punishment and extra-legal killings: We’re not stringing them up like it’s the Wild West.

Unfortunately, as happens, Hartshorn’s characters seem to argue more coherently on the side of the devil. In an earlier scene involving Travis and his wife, Shirley, Travis offers a response that might have been made to Jake:

So they’ll say it’s punishment. But it’s also retribution. And vengeance. They’ll say it’s a way to remove those people who have proven that they can’t function within the bounds of society. Which is true, I suppose. But all those reasons sound to me like justification after the fact.

Even here, Travis feels obliged to concede the point. And he further fails to prosecute his argument:

… the arguments against capital punishment are usually calls for compassion and rehabilitation […] which are really just appeals for clemency, and don’t address the nature of the capital punishment itself. […] Ten years ago, I realized that when you allow capital punishment, you’re granting the state the power over an individual’s life and death. And I just can’t abide by that.

What is disappointing is that Travis turns out to be such a poor advocate for the thematic concerns of the novel. He cannot articulate a philosophical position beyond his own feelings. Even ten years before, in the throes of the Sutton case which would estrange Travis from his family, Hartshorn never allows his character to fully express the implications of capital punishment:

Have either of you thought about the larger implications?” Travis asked. He sounded timid to his own ears, uncertain. “I mean, of capital punishment. Like what we give up as a society if we allow the government to execute …

The ellipses appear in the text. Leaving the issue expressed as a rhetorical question is not enough. And while the novel does raise the problem that innocents may be executed, Travis’s position is predicated on philosophical and moral grounds which are never coherently articulated. How does capital punishment square with the philosophical underpinnings of the constitution? With the Enlightenment principles upon which it was written? How does a society define its values if not through its actions? What is the balance between extermination and rehabilitation? There was scope to do a lot here.

While The Guilty Die Twice has many elements that could make it an excellent legal thriller, the perspective it offers the reader is, in the end, too limited. The story opts for an easy denouement that is sudden, even if readers may have seen it coming, while skirting the larger questions that lie at the heart of its narrative. Unfortunately, this is the hazy area that Hartshorn should have avoided by trusting that his readers may have been interested in hearing what his characters had to say. 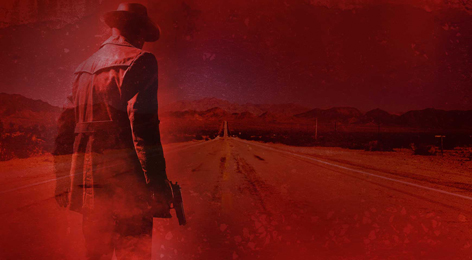 The image from the front cover of The Guilty Die Twice is an interesting scene reminiscent of the Wild West, best viewed in this wider banner format. I was originally going to discuss this image in my review. While it is not strictly an accurate representation of the story, it connects well with a couple of references to the Wild West in the novel and the subject of justice.
Widget is loading comments... 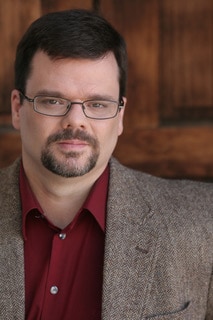 I did a lot of bad things. I hurt a lot of people. But what you’re doing ain’t right. It ain’t ever gonna be right, no matter how you try to justify it.