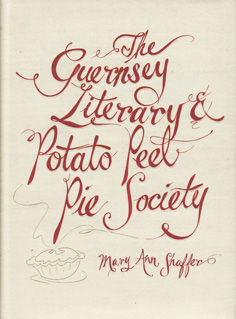 This is a charming, feel-good story, and one that I really enjoyed reading. But it had its faults, the main one being that it is an epistolary novel. Now, I have loved other epistolary novels – 84 Charing Cross Road is a much beloved favourite of mine. And one thing that stands out in 84 Charing Cross Road is that each separate letter writer has their own voice. You can easily pick which letter is written by Helene or by Frank or any of the other writers. And that is something you just cannot do with The Guernsey Literary and Potato Peel Pie Society (GLPPPS). Perhaps my comparison is unfair, as Helene Hanff did not make up the letters in 84 Charing Cross Road but rather had saved the letters she received, and her letters to the bookstore were on file, and copies sent to her when she requested them after Frank's death. She arranged the letters to tell the story, but did not have to make up the letters/stories.

GLPPPS is different. The author deliberately chose to tell her story through a series of letters, so had the difficult task of conveying each character to us via their 'letters'. And she just couldn't do it. I couldn't tell from reading each letter who was writing it, and had to depend on the names at the top of each to keep the story straight.

But apart from this, I enjoyed the book. Juliet is a likeable character, there is a slowly unfolding romance that all ends happily, and there's a bit of history thrown in. The history bit particularly interested me – I'd read some other book long ago which started on a Channel Island but quickly transferred to England when the main character was evacuated just before the Germans arrived. So, I was vaguely aware of the German occupation of the Channel Islands in World War II, but didn't know much about it. GLPPPS provides some interesting insights into this history, and into how it impacted on the residents of the island.

The story itself is a simple one. It is 1946 and Juliet is promoting a book based on amusing short stories she wrote for a paper during the war. She wants to write a more serious story, but is having trouble finding a subject. One day she receives a letter from a man on Guernsey who has a book which formerly belonged to her (it had her name & address inside the cover) and she starts a correspondence with him and gradually with other Islanders. From their letters, she gets an idea for a book about life in Guernsey under the occupation, travels there to meet everyone, and settles down there to write her book. Juliet, as a lover of books, is delighted to discover how the literary society came into being and the impact books had on the lives of various islanders. The society helped the members survive the occupation, with each of them taking strength from different books they discovered or from the friendship and support of other society members.

Recommended to anyone who wants a light hearted, feel good book. It was just what I needed this week.