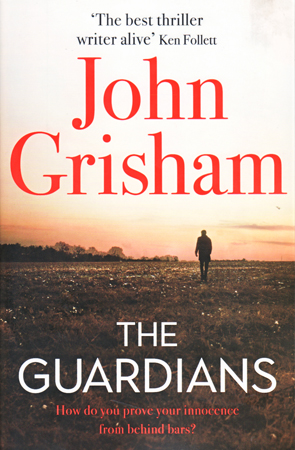 We have all heard stories of law firms doing pro bono work. In John Grisham’s latest book, The Guardians, Guardian Ministries is a small establishment that offers pro bono work. It’s a law firm on a small budget, a not-for-profit business defending only people they believe are innocent. One of Guardian Ministries fighters for justice is Cullen Post, a lawyer and minister who picks and chooses which cases he will and will not take.

The book is essentially about one case that Cullen has taken on, that of Quincy Miller who was sentenced to life without parole for killing Keith Russo, a local lawyer in his town. Quincy has been in prison for 22 long years, and it is his hope that with Cullen taking on his case, he will be finally freed.

Cullen believes in Quincy from the start, making taking his case an easy decision. He goes to extraordinary lengths to prove that the evidence which was used against Quincy was not reliable and that he had little motive, two of the most important factors in any trial. They employ the services of a DNA expert at considerable cost, something which was not even available when this case broke, and other current experts in their fields to assist in refuting evidence used long ago.

This is one of about eight current cases Cullen is working on with the goal of having more innocent people exonerated. Already, he has helped free eight others in the past ten years. Many of Cullen’s current cases are actually on death row, close to their final meal: some are spared at the nth hour on numerous occasions to live another day. Grisham spends some time, a chapter on each of these other cases, giving his reader a run down on the types of cases Cullen represents and why he takes them on.

As in many of Grisham’s books, there is much more to Quincy’s case than the reader anticipates, even more than was produced during his initial trial. Cullen believes that Quincy has been wrongfully convicted due to a combination of racism of an all-white jury against a black man, added to something much deeper: missing evidence, unreliable statements from paid-off witnesses and ultimately someone else being responsible for the murder Quincy is accused of.

At one point in the book, Grisham narrative turns to the underworld of crime. It is a short unusual aside, but it is totally thrilling and adds a great deal to an understanding of the case. As unbelievable as it sounds, the case is based on a true story.

Is Quincy really innocent of the crime? Just how deep will Cullen have to dig? Will Cullen manage to free his ninth client?

John Grisham’s latest legal thriller is an excellent book, thoroughly thought provoking to read, and delving yet again into the depths of the workings of the legal system.