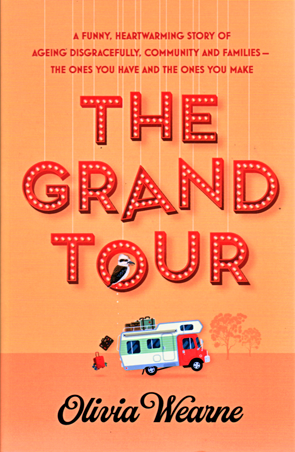 Ruby and Angela – you couldn’t meet two more unlikely a pair to head off on a road trip in a motor home together. Originally neighbours, who would have expected that Ruby, a retired school sick bay officer and Angela, a widow whose husband has recently passed away, would become touring partners and head off on adventures to parts of Australia together, especially since both have completely different personalities. That the basis of Olivia Wearne’s book, The Grand Tour. Ruby is always the listener, caring for all, while Angela, fed up with dealing with her siblings’ antics, shows very different qualities. However, the one thing they share is a sense of humour.

Entwined in their story, is Bernard, Angela’s brother, a washed-up news presenter who has gotten himself into deep water in more than one situation. He has resorted to doing audios for talking books and this leads to legal issues due to his inability to keep to the deadlines set. Add to this a case of drunk driving, along with marital issues, Angela often wonders why she continues to keep trying to keep getting in touch with her brother at all. Bernard lives a totally different life to his sister and neither seem to understand the other. Bernard and his wife have wild parties, drinking and eating, while Angela prefers her own quiet travels.

Ruby it seems, was never a great mother to her daughter, Carol, who appears to have followed in her mother’s footsteps. She lives in a caravan park, with her own 10 year old, Izzy. Ruby doesn’t approve of the way she has been brought up, that there is often little food, or it appears, love, for the girl, and voices this to Carol, who likewise doesn’t appreciate her mother’s comments. Their relationship is dysfunctional and this only adds to the conflict between them.

When Izzy, a child craving love and attention stows away on her grandmas Winnebago in order to get away and have a bit of fun, Ruby thinks she is doing the right thing by giving her daughter a break from the child, but when the authorities are called in and Izzy becomes a missing person, things become dire, and both Ruby and Angela find their friendship tested as they embark on their not-so-well-planned travels together.

When people retire, they expect to be able to spend their time doing what they want. The Winnebago turns out to be a money munching machine and life isn’t exactly as either Ruby or Angela plan. As for Bernard, his wife Mia and their friends, aging gracefully is sometimes not what you expect. Trying to learn the lessons of life and get along with others doesn’t come naturally for them all.

I found this book a light hearted look at the ways people can approach getting older. Set in Australia, it mentions locals we Aussies are familiar, and for this reason alone it may hold some Aussie interest. Also, parts of it had me chuckling away to myself. As Christmas nears, the families get on with their own celebrations and the way these unfold gives insight into their development and change.

It was a pleasant enough read, with some funny parts along the way. Many would probably relate to the family issues brought out, but whether they’d expect the outcomes here remains to be seen. 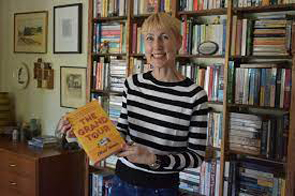