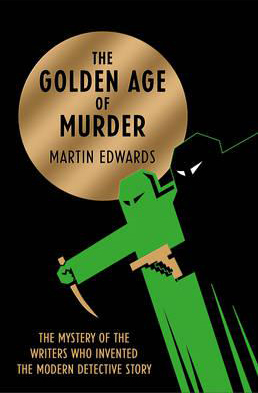 Wars may come and wars may go, but MURDER goes on forever...

I have a major complaint after finishing this book - WASN'T MY TBR LIST BIG ENOUGH ALREADY??? Seriously, I've just filled three pages of my reading journal with new books I want to read! I will be reading a few of them this year, as I have set myself my own reading project to read a lot of classic mysteries, especially those from the Golden Age. Although mysteries go back much earlier, to writers such as Edgar Allan Poe, Wilkie Collins, Arthur Conan Doyle and even Charles Dickens, the Golden Age is generally regarded as the 1920s and 1930s, the period when many of the top crime writers wrote their best known works. This era is the focus of Edwards’s extremely chatty book, The Golden Age of Murder.

A note for context: although Edwards occasionally mentions writers from other parts of the world, his focus in this book is British writers. The writers and their works he discusses in detail are the founding members of the Detection Club, a group formed by Anthony Berkeley and Dorothy L. Sayers in 1930 to provide a social network and support system for mystery writers. Relatively few non-British writers were invited to join the Club, and those that were had strong connections with Britain, such as John Dickson Carr and Baroness Orczy. In 1936 Carr was the first US writer elected to the Club, but he had lived in England since 1933 with his English wife and set most of his books in England. Orczy spent most of her time in her villa in Monte Carlo by the time the Club formed, but returned to London regularly to attend Club dinners. So while you may be able to think of many mystery writers who wrote during the Golden Age, they may not be discussed in this book. Remember, this is primarily a history of the Detection Club, not a broad history of the Golden Age.

Edwards obviously spent a lot of time researching this book. It is highly detailed, but written in a very gossipy style which makes it easy to read. Not only does he discuss the major works of many writers, he gives us a lot of biographical detail and uses this detail to provide context for the books themselves. I already knew some background for Christie and Sayers, but almost nothing at all about the other writers discussed. Indeed, I had never even heard of some of these writers! Of course, some of them sound like they deserve to be forgotten. For example, although I will try to find one of Douglas and Margaret Cole’s early books for completeness, nothing Edwards wrote about them has me excited to read anything of theirs. But a few, such as Henry Wade and John Rhode, two writers I’d never heard of before, sound like they wrote some excellent mysteries that I hope I am able to find. So there is the first major reason to read this book, to learn about writers who have gone out of fashion and whose books are now hard to find but are nevertheless seen as classics of the genre.

The other major takeaway I from this book is an understanding of the context for many of my favourite writers’ books. While I knew Christie had worked in a dispensary in World War 1 and had used this background for her first book, The Mysterious Affair at Styles, I had no idea that she had a brother who was wounded in the war and of the impact his mental and physical scars had on her writing. And while I knew that her first marriage ended in divorce, I had never considered the position this left her in, the financial insecurity that drove her, or the social isolation that led her to welcoming the society of peers she found in the Detection Club. Edwards’s book provides similar background stories for many different writers, highlighting how their life experiences informed their writing and their subject matter. This book is filled with hidden gems, but you do need to wade through a lot of less interesting, more gossipy stories, sometimes, to get to the gems.

These days books from the Golden Age are considered ‘cosy’ mysteries, light hearted stories that served to reinforce the idea that murder disrupts the social order and that the solution restores this order. And it’s true that for many people the books provided a much-needed escape from the reality of life in the Great Depression. However, this book really highlights for me that first, while many of the stories seem conservative from a modern viewpoint, many were considered highly shocking in their day. And second, many of the Golden Age writers were definitely not conservative in their political views and used their books to highlight social issues and the reality of European politics in the period between the two World Wars. Many of the writers discussed in this book were worried about the rise of fascism across Europe, particularly in Germany, and spoke out against this in their writing. E. R. Punson’s Crossword Mystery was apparently one the first books published which included an attack on Nazis. Many writers incorporated social and economic realities in their books and did not shy away from discussing issues they considered important.

I enjoyed this book and would highly recommend it to anyone interested in crime fiction. Just remember that if you read this book you will end up adding more books to your TBR pile. You have been warned! 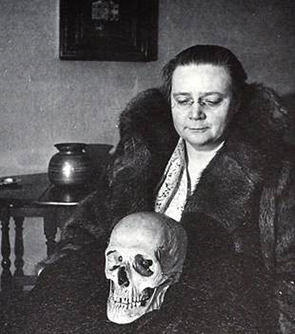 Dorothy L. Sayers and Eric the Skull
Dorothy L. Sayers with ‘Eric’, the skull used in the Detection Club’s initiation ceremonies. John Rhode, a now mostly forgotten member of the Detection Club, used engineering skills gained in the war to fit red lights in Eric’s eyes that he would switch on at just the right moment during the initiation ritual, lighting up the darkness with a fierce red glow from the skull’s eye sockets. 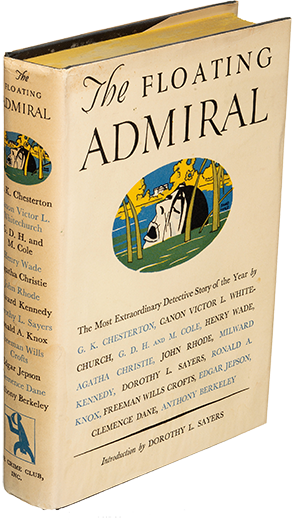 The following is an oath sworn by new members of the Detection Club, thought to have been written by Dorothy L. Sayers:

Do you promise that your detectives shall well and truly detect the crimes presented to them using those wits which it may please you to bestow upon them and not placing reliance on nor making use of Divine Revelation, Feminine Intuition, Mumbo Jumbo, Jiggery-Pokery, Coincidence, or Act of God?