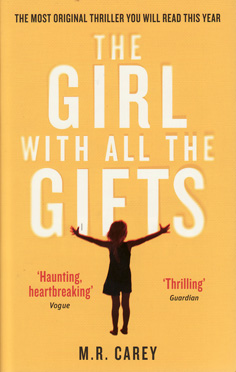 The Girl With All The Gifts
M.R.Carey
Raven

The Girl With All The Gifts is an amazing story of a girl whose world changes suddenly and everything she knew was gone when the classroom she had known all her life is destroyed. Emerging into a world where everything is out to get you is hard for Melanie who has only ever known the classroom.

This book gives a new spin to traditional, generic zombie stories. It’s believable that a fungus that kills ant communities, could grow and adapt to target humans. It makes the world seem scarier to think that something like this could happen to us.

This was a gripping story that I did not want to put down. Highly recommended.

My edition of The Girl with all the Gifts has an author interview at the back. On the subject of apocalyptic thrillers, M.R.Carey states that they are, about ethical issues, that a lot of post-apocalyptic fiction uses the sweeping away of the here-and-now to explore the question of what endures. What defines us. In a new world, born in flames or plague or zombie holocaust, what would we be and how would we change? Carey’s tale certainly does raise questions. He does this effectively by making his protagonist a child, Melanie, and her closest relationship with her teacher, Helen Justineau. But this isn’t any ordinary student/teacher relationship. Each morning Melanie is greeted by guards who come to her cell and force her into restraints at gunpoint. She is then wheeled into a classroom with other children, all similarly restrained, to receive lessons from Ms Justineau. Nevertheless, Ms Justineau is the highlight of Melanie’s days and it is not surprising that she has formed a crush on her.

But being a post-apocalyptic thriller, this is not a novel about appropriate student/teacher relationships – it’s fairly normal for kids to have a crush on a teacher at some stage, after all. The kinds of issues it raises are more likely to be about social attitudes to children, how and what is taught, as well as picking at that favourite scab of much science fiction: what essentially do we mean by ‘humanity’? As always, it is scientific practice that is put under the microscope in the person of Dr Caldwell, who is determined to compensate for her own career disappointments by being the one to find a scientific solution to the crisis that has forced Melanie into this bizarre classroom.

It becomes fairly obvious in the early stages of the novel that something has gone terribly wrong in the outside world. How is a classroom, run the way that it is run in this story, exist, otherwise? The word ‘zombie’ begins to formulate in one’s mind as the story gets underway, although the word is never used anywhere in the novel. Instead, the dehumanised hoards of the outside world are referred to as ‘hungries’, since they have a penchant not just for brains, but human flesh of any kind.

Carey’s gateway into this zombie-like apocalypse is frightening since it has an emotionally convincing catalyst, the cordyceps fungus. I remember nature documentaries that detail the horrific death of insects – I’ve seen films of infected ants – that come in contact with the fungus. Once infected the fungus affects the insect’s neural system and fungal growths spring from its body. Its self is first subsumed because the insect loses control of its own movements and, presumably, ability to make decisions, and second, because it is physiological consumed by the fungus. The premise of the story, of course, is a ‘what if?’ What if the fungus could mutate – naturally or by human experiment, the characters never know for sure – and infect humans?

This is just the beginning of the novel. There is much to come and it is all entertaining, even if not entirely original. Apart from a burgeoning zombie culture in the last decade, of which the most intelligent contribution remains, to my mind, World War Z (the book, not the terribly disappointing film) this book reminded me of other popular works. For those familiar with the computer game The Last of Us, this novel will seem familiar. It also reminded me a lot of Michael Crichton’s work, particularly, of course, his Jurassic Park novels, although there are elements, also, of The Andromeda Strain. For anyone familiar with The Andromeda Strain, parallels should be obvious (a bug that threatens humanity; desperate attempts to contain it) but Jurassic Park, for me, could also have been a template for this novel. You know what happens when the theme park goes wrong. All there is to do is run and try to survive and make it to a place of safety. In the meantime, characters lament about the hubris of science, although in this case, since the origins of the problem are unclear, it is the ethics of scientific investigation and how it treats its subjects which are under the microscope.

I also considered how Matthew Reilly might have handled this story. It has many elements of his writing. There is a lot of action and a tough male lead character, Sergeant Parks, along with his offsider, Gallagher. As in this novel, the groups in Reilly’s stories tend to have an eclectic mix, so there here we have Dr Caldwell, the scientist, Ms Justineau, the teacher and Melanie, the child. I’ve talked about Reilly’s characters in another review and how he tends to sentimentalise children and create uncomplex characters. Carey, on the other hand, has attempted to give his characters some depth with snippets of their backstories that highlight their reactions to their situation, but the emphasis is mainly on a fast-paced, entertaining story. Nothing wrong with that. However, I think Carey has avoided the weakness of sentimentality, especially as this was an easy trap to fall into when representing the relationship between Helen Justineau and Melanie. This is partly done because we understand that Justineau doesn’t simply idealise children, but offers an ethical voice about children and what they mean to society against the pragmatic, perhaps even self-interested voices, of other characters. Added to this, Melanie, herself, is not just baggage, not a cypher to be fulfilled by adult agendas, but the most fully rounded and intelligent character of the group. Unlike Dr Caldwell, we want to get at her mystery because we know she doesn’t just hold the key to a scientific breakthrough, but because she is paradoxically human, and makes us question how we can define that.

The Girl with all the Gifts offers a lot to think about, if you’re so inclined, but it wears its weightier concerns lightly. This is a narrative that skips along, full of action and incident, and is an entertainment before it is anything else. I really enjoyed it. It’s a great light read, but its elements of horror brought my mind back to certain scenes after I finished and had me thinking about what the book had to say after I’d enjoyed the story. Well worth it.

A Video on the Cordyceps Fungus and its Affects on Insects
Widget is loading comments...