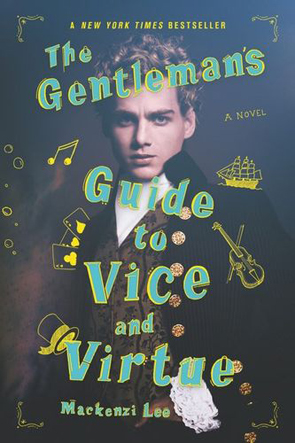 The Gentleman's Guide to Vice and Virtue
Mackenzie Lee
Toriaz

This is a fun YA romp through Europe in the early 18th century. Our protagonist is Henry Montague, or Monty to his friends, Viscount of Disley, the privileged eldest son of an earl. On the surface, Monty appears to have a pretty good life. The story opens on the morning he is due to depart on his Grand Tour, that traditional trip through Europe taken by upper-class English men. He will be accompanied by his best friend, Percy, his younger sister, Felicity, and a bear-leader, as the tour chaperone is known. Felicity will only be with them for a short time in Paris, before they leave her at a finishing school in Marseilles where she is due to receive a proper education in social graces before she enters society.

Monty is anticipating a riotous year of debauchery with Percy before they finally deposit Percy in Amsterdam where he will be studying law. Monty will then return home, to assist his father in managing their estate. So, he is shocked on the morning of his departure when his father gives him a long lecture on appropriate behaviour and gives Mr Lockwood, the hired bear-leader, the authority to ensure that there will be no drinking or gambling or smoking or visiting dens of iniquity or other sordid establishments. They will spend the year attending worthy scientific lectures, visiting numerous churches and art galleries and attending the opera. If Monty does anything to shame the family, the Grand Tour will be cancelled immediately and Monty will be disinherited. The earl now has a second son and does not need Monty.

Monty copes for a month with these conditions, then finally comes unstuck after an argument with Percy who has been enjoying the cultural activities. They all attend a ball at the Palace of Versailles with the English ambassador, a friend of his father, who has also been told to ensure that Monty does not drink and disgrace the family name. Monty manages to distance himself from the ambassador after an unpleasant encounter with the recently fired French Prime Minister, the Duke of Bourbon, and finds comfort with a friendly lady. That friendly young lady takes him to a private suite and they settle down to become more intimately acquainted with each other with a game of strip poker. He discovers his new friend is the mistress of the Duke of Bourbon, and that they are in the Duke's private chambers. Monty decides to steal a knick-knack from the Duke’s desk, an interesting looking box. He has shed most of his clothes before they are disturbed by the Duke returning to his chambers, and is forced to flee naked, holding all his clothes. Unfortunately, instead of fleeing into the gardens, he takes the wrong turn and does a streak in front of all of the guests. This is social disgrace exceeding anything his father or Mr Lockwood had foreseen! The tour is cancelled and they all leave Paris the next day, heading to Marseilles to leave Felicity at school early before the others return to England.

The journey to Marseilles is an uncomfortable one, both physically, as it is a journey of around a week in a small carriage, and mentally, as everyone is angry with Monty. Several days in, disaster strikes when the party is attacked by highwaymen. Monty, Percy and Felicity manage to escape on foot and this is the point where the story really gets going, as we roll from one adventure to the next and have a rollicking good time along the way. Monty recognises one of the masked highwaymen as the Duke of Bourbon and confesses to his friends that he stole something from the Duke. They realise it is actually something valuable, and also that it does not belong to the Duke. They set out alone to return it to its rightful owner, chased across Europe by the vengeful Duke. As well as highwaymen, they encounter mad alchemists, pirates and evil nobles. They get into impossible dilemmas and somehow manage to stumble their way through, leaving behind the trappings of their wealth. And along the way, they all start understanding each other a little better.

This all sounds like a simple adventure tale, where the hero eventually overcomes all the obstacles and returns in triumph at the end. But this is much more nuanced story than my broad outline suggests. While on the surface Monty appears to be a narcissistic, self-absorbed hedonist, he is damaged – he has been beaten repeatedly by his abusive father who thinks if he beats Monty enough, he will beat Monty’s liking for boys out of him. Monty is bisexual in a world where such things are illegal and could result in imprisonment or even hanging. Early in the book, Monty flinches away from anyone who even looks threateningly at him, but by the end, he faces up to bullies, even though he still expects to be hurt. He is also in love with Percy, but has never told his friend this. This leads to many misunderstandings between the two of them, especially in the early parts of the book.

Meanwhile, Felicity hates society and would rather be left to read in peace. She wanted a real education and instead is being sent to a finishing school to become a proper lady. She is initially resentful that her brother was sent to Eton where he was sent home in disgrace (after being caught with another male student) while she is not allowed an education. In her eyes, Monty is given all of the privileges and just squanders them. She is smart and wants to study medicine, an impossible dream for a woman in this period. The escapade with Monty gives Felicity a chance to show what she is capable of and gives her an opportunity that she would never have had if she had been deposited at her finishing school as planned.

And Percy, Monty's best friend since childhood, he too has problems. For starters, he is illegitimate and biracial, his father having brought his son home from the Caribbean then inconveniently died, leaving Percy to be raised by an uncle. Despite family wealth, he has no position in society. He is also has epilepsy, a medical condition which was not understood at the time (it’s not even that well understood today) and is not actually going to study law in Amsterdam. His family intend for him to be locked away in an insane asylum for the rest of his life. He had tried to keep this secret from Monty, not wanting his friend to reject him as his family have done. Under the stress of hiding from the highwaymen, he has an attack and so reveals his secret. Felicity manages to treat him, and reveals her secret desire to study medicine. And Monty finally reveals to his sister the real reason he is frequently covered in bruises, and that it wasn’t fighting other boys that got him expelled from Eton.

So, we have three misfits thrown together without money or any real plan of what to do. And somehow they stumble through it all and survive. Their adventure gives each of them a chance to escape from the expectations society has placed upon them, if only for a short time. The story is told solely through Monty’s eyes. There is a sequel told from Felicity’s perspective, The Lady's Guide to Petticoats and Piracy, and a third volume to be released in 2021 that will be the story of Monty and Felicity's much younger brother Adrian (The Nobleman's Guide to Scandal and Shipwrecks). But this story is from Monty, and follows his journey to awareness. Monty’s voice is charming and funny and honest, even if he is an immature buffoon. But he’s a lovable buffoon, and you feel for him as he struggles to fit into a world that is just wrong for him. While on the surface this story is just a rollicking adventure for some privileged kids, it contains flawed characters who make mistakes and end up stronger for it. And it’s got a sweet love story as well, so what is there not to like? Nothing! Read this book if you want a funny romp from adventure to adventure while dealing with issues such as homophobia, racism, sexism, misogyny, PTSD, abuse and whatever ‘ism’ it is that describes how Percy is treated because of his epilepsy. 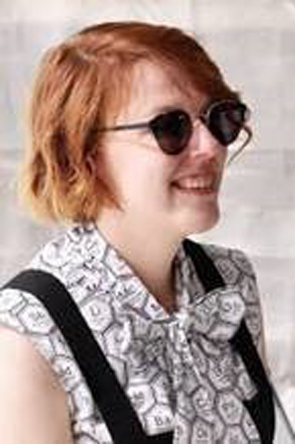 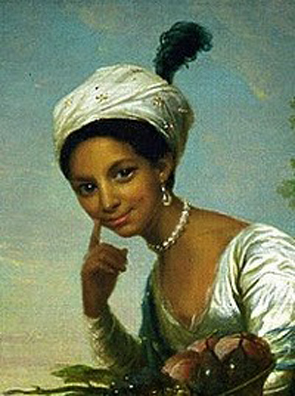 Portrait of Dido Elizabeth Belle (cropped, the full painting includes her white cousin Elizabeth)
A biracial heiress born in 1761, Dido Elizabeth Belle was raised by her father’s uncle in Britain. Lee mentions in her author’s notes that Dido was one of the inspirations for the character of Percy, along with Alexander Hamilton and Alexandre Dumas.