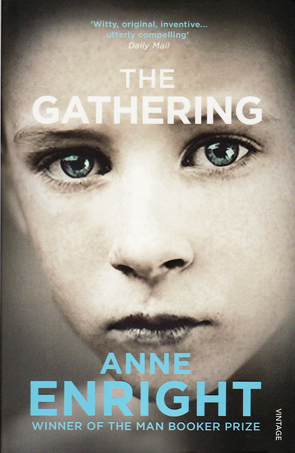 Howard Davies, chairman of the judges for the 2007 Booker Prize, said of The Gathering, that year’s winner, that it was a “powerful, uncomfortable and, at times, angry book.” Anne Enright said of her book, “It is the intellectual equivalent of a Hollywood weepy.” The book encompasses the range of these emotions, from the angry affixing of blame, to the uncontrolled weeping of loss. This may not sound appealing. The book, set in Ireland, tells the story of three generations of the Hegarty family through the eyes of Veronica, beginning with the first meeting of her grandparents, Ada and Charlie Spillane, in a hotel foyer in 1925. The central event that connects the story of her grandparents and the present is the death of Veronica’s brother, Liam, only eleven months older than her and her closest sibling. Inebriated, Liam loaded rocks into his pockets and walked into the sea. Now, with Liam’s body to be brought back from England, his family is returning home for his funeral. During the whole ordeal, Veronica will be forced back upon memories of her brother and their growing up, in an attempt to understand why he chose his end. Ultimately, she will blame her mother whose mind is now slipping, and wonder at the fidelity of her own childhood memories. To be clear, The Gathering is a sad story that focusses upon the impact that Liam’s death has upon Veronica and her family, but it is not entirely devoid of hope. The novel’s detractors have emphasised its meditation upon grief, without mentioning its hopeful ending; have even criticised its narrative honesty, as though an unreliable narrator working blindly through her own grief and memories, weakens the calibre of the novel. Quite the opposite.

Veronica’s memory of events is, in fact, a central feature of this novel. It would be inaccurate to say that Liam’s death is not important, or to suggest that Veronica’s family are peripheral to the story, but it helps to reduce one’s expectations about the need for a traditional cohesive plot in order to consider Enright’s approach to her subject. Careful readers may have already spotted the problem: that Veronica’s attempt to delve into the past and the lives of her grandparents is, first of all, problematic. She was not alive to have witnessed their relationship bloom and mature. She could, at best, base her narrative on what was told to her as a child, but Veronica’s own fairy tale account of her first meeting with her husband, Tom, told to her children, reveals the limitations of this kind of information. In fact, Veronica admits that she has created false narratives in her mind about her grandparents, that now have a reality for her. She relates in vivid detail how beautiful Ada was, her attraction to Lambert Nugent, and Charlie Spillane’s competing with him for Ada’s attention. Veronica even imbues her grandmother with surprising sensuality. From the memory of Nugent and Ada merely touching, Veronica creates in her mind a furtive encounter peppered with words like ‘breast’, ‘crotch’, ‘penis’ and ‘belly’. From the known realities of Veronica’s childhood – her grandmother’s marriage to Spillane and Nugent’s constant presence as their landlord – Ada’s story takes on mythic proportions for Veronica. From the love triangle of the early story emerges the daring supposition that her grandmother had even been a prostitute, based upon the mere presence of Frank Duff, a crusader against prostitution when Veronica was a child.

Veronica’s memory is unreliable; it would seem wilfully so, at times. The only things I am sure of, she tells us, are the things I never saw. It is not reality – an accurate account – that is desired, but an understanding of the self: I do not think we remember our family in any real sense. We live in them, instead. This is what I mean when I suggest that reducing one’s expectations for a cohesive plot – the past, Liam’s death and the family – can shed light on why this novel is a compelling approach to grief. The life of the story is interior, not exterior; of thought and feeling rather than incident and action. At the beginning of the novel – a period set after the funeral and the wake – Veronica gets into her car and without planning to, drives to the airport. She contemplates leaving her husband and two daughters. She has not had sex with Tom after the night of Liam’s wake, and she now keeps strange hours, sleeping only when he is awake, like a ghost haunting the house. Everything Veronica does is a journey either away from her old life or back to it, much like the passengers who move through the airport: I wonder are they going home, or are they going far away from the people they love. There are no other journeys. Veronica needs to understand her brother’s death because it weighs upon the question of fate and whether Veronica can control her own life. In her memory of her grandfather’s death, her brother reaches out to touch his grandfather’s hand, which becomes an intimation of Liam’s own death in Veronica’s mind. In her daughter’s face she fears she sees how her daughter will one day lose her beauty if Veronica cannot find a way to make her happy. The diseased face of a syphilitic man suggests something more horrible: What is written for the future is written in the body… It is an observation not so much in support of biological determinism, but a metaphor for the shaping force of family and experience. Is it possible to escape one’s past?

It is a question never explicitly asked but it is implied through Veronica’s focus upon the events at her grandmother’s house when she, Liam and their sister were sent to stay at Broadstone after their mother’s health declined. Were the seeds of Liam’s suicide sown through abuse he received in the house long ago?

The question of the past also takes on a tangible reality, ironically, through the various ghosts of the novel. Veronica imagines Nugent’s ghosts – his sister and mother – inhabiting the space near him the very first time he sees and admires Ada. Like a man condemned by his own lust, Veronica later imagines Nugent’s desire for his sister as she lay dying of tuberculosis. It’s a complex memory/imagining, since Veronica will also be plagued by visions of her own brother, even imagining his brief touch at his own wake. When she sees Tom sleeping, she remembers her brother sleeping in bed, as though Liam has rematerialized as her husband. At other times she imagines Tom has died rather than being asleep, a seeming avatar of her brother. Unlike Nugent’s appraisal of his dying sister’s body, Veronica can not recall Liam in any detail, yet when she looks at the body of her husband her association with Liam’s dead body is so strong she can no longer sleep with him.

Veronica’s narrative perspective is a construction as much as it is an account. The book has some small similarities to Virginia Woolf’s Mrs Dalloway. Woolf’s experiment with stream of consciousness is aptly employed in many aspects of Enright’s novel. Veronica’s non-linear account is shaped by her emotional reaction to Liam’s death and the subsequent events which push her mind back into the past, as well as after the funeral. While Woolf’s story follows Mrs Dalloway’s thoughts during the day before her party, Enright’s novel inevitably moves towards the gathering of the family for the funeral and the wake. But Enright’s novel is also a mental ‘gathering’ of sorts; of Veronica pulling herself emotionally back together, of attempting to reconstruct the past, if not with the fidelity of verifiable facts, then with the purpose that she will come to terms with her own grief. Veronica’s world, therefore becomes an extension of herself and her understanding of others. Her mother’s rambling house, a series of jerry built sheds and extensions (You could not sell the place) is described as a warren, cleverly suggesting the hodgepodge construction made to accommodate a growing family, but also suggesting the truth of her parents’ relationship which embarrasses Veronica: her parents had a lot of sex. With twelve children (not including seven miscarriages), they fucked like rabbits. Ada’s house, on the other hand, was very quiet:

There were things on mantlepieces and little things on tables, that you might not touch. There were drawers full of things that had not been used for years, or were only used once a year. All these were separate from each other, and special, in a way that things were never separate at home.

Ada’s house is private and ordered, with everything overlayed with an air of secrecy and mystery, representing as it does, the opacity of the past. In contrast, Veronica’s present house is a soulless show home built from expensive materials where nothing settles, not even the dust.

There is no denying that The Gathering is a somewhat sombre read that eschews traditional plot for psychological realism. To criticise it for that would be like saying that Mrs Dalloway is just about a woman who buys flowers and throws a party. Like Woolf’s experiment, The Gathering represents the mind and emotions of its protagonist. We shouldn’t be wondering what happens next, but how Veronica processes her thoughts and memories prompted by her brother’s death, reminding us that our understanding of who we are is not just a series of events, but a lived construction. Understanding this makes The Gathering not only a complex and interesting read, but also enjoyable and accessible. 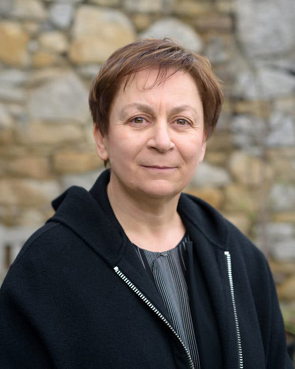 Religious Undertones of the Novel

Veronica Hegarty is an avowed athiest, but she is an Irish Catholic and religious allusions pepper her narrative, despite its largely secular tone. This is in conjunction with supernatural events, like seeing ghosts, which are clearly a product of Veronica's imagining. The following artworks represent three allusions made in the novel: 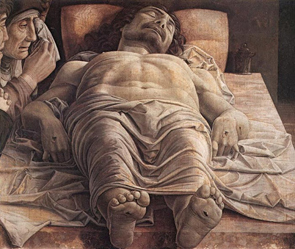 If you ask me what my brother looked like after he was dead, I can tell you that he looked like Mantegna's foreshortened Christ, in paisley pyjamas. 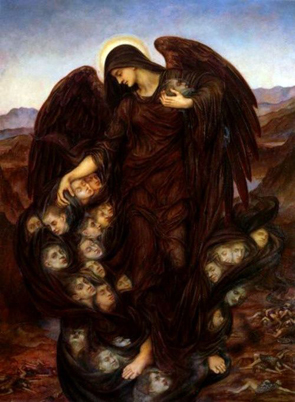 I must ask his name [the undertaker] again. (Azrael)

He touched my arm while I stood by Liam's body and he led me away. 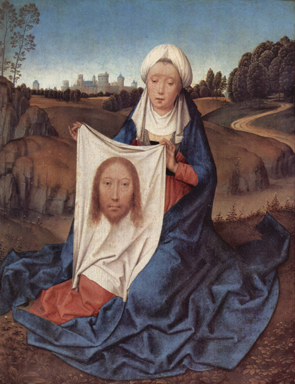 My own name, Veronica – an ugly enough thing I had always thought, it sounded like either the ointment or the disease – was one of her great favourites. St Veronica wiped the face of Christ on the road to Calvary and He left His face on her tea towel. Or the picture of His face. It was the first ever photograph, she said.

I became quite fond of her; a figure leaning out of the crowd, both supplicatory and tender. I still think of her wherever wet towels are offered in Chinese restaurants and on old-fashioned airlines. We have lost the art of public tenderness, these small gestures of wiping and washing; we have forgotten how abjectly the body welcomes a formal touch. I knew my fate must be linked to Veronica’s, in some way.