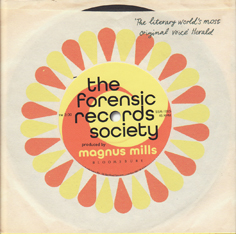 This is a fun light read. With a night dedicated to the book, it could probably be read in one sitting. In fact, its lack of chapters or other breaks encourages a quick read. I found myself almost half way through the other night when I had only intended to take a look at the first few pages.

The story is simple. James and the unnamed narrator are music enthusiasts who decide they will start a music appreciation group, the Forensics Record Society, in the back room of their local pub. They convince the publican, George, that their group might bring him some added business, so he agrees. However, the inaugural meeting of the Forensic Records Society reveals a few quirky features of the group. When their first member, Chris, turns up three quarters of an hour early, James refuses to admit him or talk to him until the advertised time. Chris is made to wait out in the pub on his own. Once the meeting starts, a man in a long coat arrives late, but James insists no-one will be admitted past the advertised time. James feels this will be a test of his commitment. James’s strict rules apply to the meeting procedures, too. Each member is to bring three EP records each week. The records will be listened to by members of the group, but no comments will be made. The idea is that they listen intently, but are forbidden to make comments of any kind once each song finishes.

The tenets of the group are challenged when the man James rejected for lateness during their first meeting, Phillip, starts a rival group, the Confessional Records Society, on Tuesday nights. However, this new group works upon a different set of principles. The Forensics group aren’t certain what they are. They send in a spy who is ejected. Eventually they glean some information. The Confessional group, composed mostly of women, sits in the pub waiting their turn to enter the back room where they play their song and confess: why they like it, what it means to them. The women inevitably exit the room in tears of joy, as though their souls have been touched, and are swept into the arms of their supportive friends. Not only does the Confessional group grow in number faster than the Forensic group, but the organisers are making a profit by charging each member a five-dollar fee each week.

It seems like a flimsy basis for conflict, but the book works well because Mills encapsulates wider cultural concerns through his representation of the record enthusiasts. The cliched delineation emotive women and unemotional men might first seem an obvious thought, but this becomes less important as the novel progresses. Mills’s satirical target, in fact, is organised religion. When I first saw what the book was doing I was reminded of Alexander Pope’s The Rape of the Lock. Pope’s poem was a satire about a family dispute that arose when a lock of Arebella Fermor’s hair was cut by a suitor. Pope’s elevation of the minor incident to the level of epic effectively mocked the inflated conflict that arose from the incident. Mills’s novel offers something similar, I think, except he takes a weightier subject, religion – its factions and schisms – and trivialises it. The book’s language is peppered with religious overtones: forsaken, belief, schism, zealots, judgement. And the groups act like rival religious sects. Not only does Phillip begin the Confessional group, but the Forensic group splinters into a third group, the Perceptive Records Society, and later a fourth, the New Forensics Records Society, when James’s inflexible rules prove divisive. Each group seems to echo the character of different Christian churches. The Forensics, led by James, are Protestant, in particular, Puritans, with their strict rules and their efforts to eschew the expression of personal feelings in favour of the purity of the listening experience.

The point is that we in the Forensic Records Society are purists. We don’t allow comments or judgements and that’s why the notion of “confession” is so alien to us. That act of listening is what is important; we’re not searching for inner meaning.

The Confessionals reflect aspects of the Catholic church, since its confessional basis reflects Catholic practice, and their profit making is reminiscent of the selling of Indulgences which was one criticism made by Martin Luther in his thesis. Our narrator reflects:

For reasons of their own, however, they regarded records in a completely different light to us. They viewed them as little more than props and accessories, and saw no intrinsic value in the records themselves. Accordingly there existed a gulf between the two persuasions which could never be bridged.

Later, the Confessionals graduate from the pub and move to a community hall where the crowd is larger and the profits greater. The tone becomes more evangelical.

Of course, the nice thing about this is that it is hard to take any of this too seriously, given the narrow preoccupations of the characters. And I guess that is the point. Our narrator faces ideological and personal conflict, but nothing too great is at stake here. From the reader’s perspective, conflicts seem unimportant and solutions easy.

On another note, one of the things I liked about this book, at least the edition I bought, was its great presentation, shaped to look like an old-style EP record. Another thing was that it reminded me about a lot of music I haven’t listened to for a long time. When Mike, a character prone to judging songs by their play length alone, is baffled by the lyric of a song that suggests someone left their cake out in the rain, I laughed out loud. I went to the computer to download a copy of Richard Harris’s overblown love epic, Macarthur Park, to reminisce as I listened, and wonder at this folly from the man who would one day be Dumbledore.

A fun read. I would recommend this book. 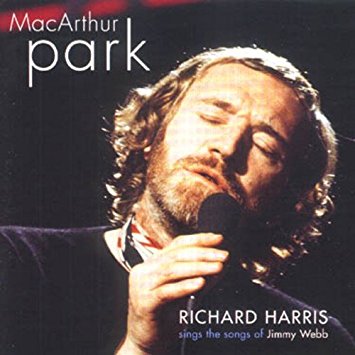 Macarthur Park
See the bottom of this page for Richard Harris’s overblown love epic, Macarthur Park ... from the man who would one day be Dumbledore