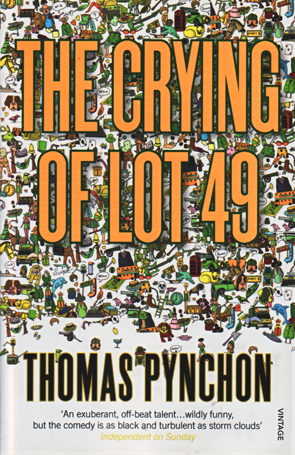 Imagine that The Crying of Lot 49 had been published this year and not back in 1965. Doing so makes more sense when you know that unearthing a conspiracy is at the centre of the plot. For those reading the book now, it is in the context of the Trump presidency, the rise of QAnon conspiracists, along with the long burgeoning popularity of conspiracy theories generally within our culture. Conspiracy theories broadly posit that our world is not what governments and other authority figures tell us it is. Trump’s assertions that Washington is a ‘swamp’ and that a ‘dark state’ exists, assume America’s institutions are corruptly run by figures hidden and unanswerable to the public. Conspiracies are attractive because they confer a level of knowledge, a sense of superiority, to individuals without power: they can’t be duped. For QAnon adherents, belief seems to have provided a common bond and culture which for many has outlasted the Trump presidency, and many remain unperturbed by evidence that paedophiles in government, if they exist, have been outed recently in the Republican party, or those with links to it, rather than the Satanic Democrat cabal that Q and his followers have conjured.

Interestingly enough, though somewhat peripheral to the main aspects of The Crying of Lot 49, there are a couple of characters in Pynchon’s book who we might deem to have paedophile leanings. Oedipa Maas’s husband, Wendell (‘Muncho’) Maas, is partial to young girls, as is John Nefastis, an engineer Oedipa consults in the course of her investigations. Pynchon was writing a few years after the publication of Lolita.

But already we’re off the main point, which is a sense one has upon first reading this novel. The plot moves from one episode to the next, some feeling like digressions while proving to be central to the novel’s concept. The novel begins with the naming of Oedipa Maas as the executor of the will of a former boyfriend, Pierce Inverarity – a somewhat ordinary event, to be sure – and then meanders through a series of episodes which reveal more and different aspects about the history of a secret organisation, Tristero or Trystero, that Oedipa believes she has stumbled upon.

Oedipa’s world is first challenged when she is seduced into committing adultery in a hilarious game of strip poker with Metzger, the lawyer assigned to help her execute the will. But when she visits a bar with Metzger, The Scope, she witnesses a clandestine mail delivery operating out of Inverarity’s company, Yoyodyne. Mike Fallopian, whom she meets at The Scope with Metzger, takes delivery of a letter along with others in the bar. He is writing a book about the links between the history of private mail delivery in the US and the Civil War. Oedipa connects his story and the strange mail delivery with a piece of graffiti in the women’s toilet that asks people to hook up for group sex through the WASTE system – the private delivery service – and uses this symbol: 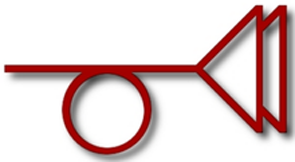 She soon begins to make other connections. Manni Di Presso, a lawyer turned actor (and now a lawyer again) is representing a mafia figure, Tony Jaguar, who has sold tonnes of bones from Inverarity and is now suing his estate. The bones are those of American war veterans, dumped in an Italian lake by the Germans after their slaughter in World War II. Tony Jaguar has harvested the bones from the lake and claims that Inverarity bought them – they were good for charcoal or fertilizer – but never paid him. Miles (the manager of their motel and a member of a mop-top band a little like the Beatles) notices the similarity between this story and an aspect of the plot of a Jacobean play, The Courier’s Tragedy. Oedipa decides to see a performance of the play, which she attends with Metzger.

Pynchon’s use of a play in the third chapter is an interesting choice. The Courier’s Tragedy at first appears to be a confusing and irrelevant distraction, but somewhat like Hamlet’s altered version of The Mousetrap presented to Claudius and his mother, we discover that it is central to Pynchon’s novel. (I’ve produced a full character map and summary of the play to view or download as a PDF for those interested, especially as it simplifies the entire plot if you are thinking of reading the book). Suddenly, Oedipa is given a clue that a violent rivalry between the mail monopoly of Thurn and Taxis, the noble family of the Holy Roman Empire, and Tristero, may be real, and spends the rest of the novel seeking evidence for her belief. She speaks to Randolph Driblette, the play’s director, who refuses to attribute any significant meaning to the play. But Oedipa is encouraged by Stanley Koteks, an engineer at Yoyodyne, who seems to hint that the WASTE delivery system is real, and by Mr Thoth, a resident of a retirement home established by Inverarity. He recalls a history of a shadowy group who dressed in the black of the Trystero of Wharfinger’s play and impersonated Indians, who attacked the mail delivery services of the US during the nineteenth century when his grandfather worked as a courier.

Oedipa’s investigations introduce her to many new characters, each with a piece of information or insight into Trystero and the symbol of the muted horn which she begins to see everywhere. Having spoken to John Nefastis, who explains to her the workings of a psychic engine to overcome entropy, whom she suspects the adherents of Trystero to be of an unorthodox sexual persuasion. Yet, an unnamed man she meets at a gay bar insists the muted horn is a symbol of denied sexuality – of group people like him who identify as ‘isolates’, which began when a Yoyodyne executive found himself being cuckolded by his wife.

It is details like this that are most interesting. As readers we see the inconsistencies in the theory and what it is about begin to grow, yet Oedipa is both convinced it is true and hopes it is not. Like any good conspiracy theorist, she is able, through investigation and supposition, to cobble together a history of Trystero and its role in both European and American history. When Professor Bortz, the editor of The Courier’s Tragedy, suggests that Trystero may have even been behind the entire French Revolution, they wonder whether this would not have already appeared in the history books. But Oedipa is so far into the whole conspiracy that She didn’t press the argument. Having begun to feel reluctant about following up anything […] Oedipa had been steadfastly refusing to look at that possibility directly…

Pynchon’s book has a decidedly postmodern flavour to it. Beginning with the clandestine mail drop and the play, Oedipa and the reader follow a bread crumb trail that is attractive because it appears to have intention and meaning. Oedipa’s plot – the one she is following – may have elements of truth, or it may be a practical joke by Inverarity. There is enough evidence of that, too. Neither Oedipa nor we as readers know. But Oedipa’s assumption is that her knowledge has meaning on a Structural level: that like de Saussure’s signifier, there is an assumed meaning that is signified. But Professor Bortz’s assessment, along with the play’s director, Driblette, offer an approach to the Trystero mystery that seems equally valid for the novel. Bortz brushes aside the assumption that an historical reality is accessible; that what is left is merely words. When the play’s Trystero assassins look at each other with intent to kill Niccolò during the performance, the look is not there in the text, Oedipa discovers, and is told it is a decision Driblette made as a director. You guys, he tells Oedipa, you’re like Puritans about the Bible. So hung up with words, words. You know where that play exists, not in that file cabinet, not in any paperback you’re looking for but [pointing to his head] in here. Pynchon’s book, like Driblette, is a projector at the planetarium. What matters isn’t the history Oedipa believes she is uncovering, but the meaning of that quest and the need for it. Somewhere in the whole muddle is a story about the repression of individual enterprise, of the breakdown in the social contract between America’s people and its government and the dangers of repressive regimes like McCarthy or the Nazis. There’s that and more. Like Driblette interpreting his play, what it means is also for the reader to decide. Pynchon’s book isn’t as narrow as a worldwide conspiracy. Instead, it is many many things.

That’s why I think it’s such a relevant book for a contemporary audience. 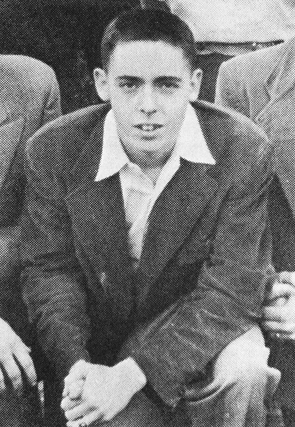 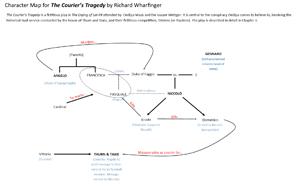 Downloadable PDF
I have created a PDF that includes a character map of the play The Courier's Tragedy, as well as a plot outline, based on the episode from Chapter 3 of the book. I have also included a list of the main people Oedipa Maas meets and their relevance to her investigation after that. Click here to view. Click here to download. 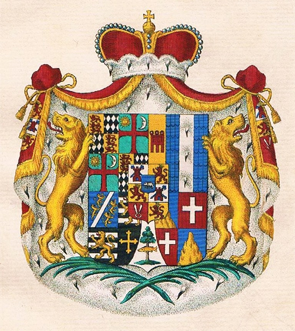