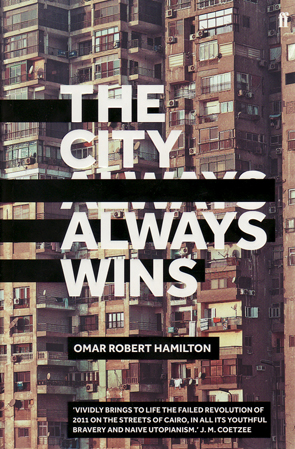 The City Always Wins is written as a first-hand account of the Egyptian revolution which began in January 2011. Written from the perspective of Omar Robert Hamilton’s fictional protagonists, Mariam and Khalil, the novel is a study in the idealism and hope of not just of the Egyptian revolution, but of all moments in history that seem to promise change – the French Revolution and the Russian Revolution are both referenced in the novel - and the eventual dissolution of the ideals upon which they are based. The book’s title alone suggests this, echoing the well-known phrase, the house always wins, meaning that the punter’s loss against the casino is inevitable.

Hamilton’s account starts not with the January 25 protests centred in Tahrir Square (which were concurrent with protests all over Egypt) that continued for three weeks, but with the Maspero Massacre of the same year. The January 25 protests were unprecedented in their scale and led to Hosni Muburak relinquishing power after eighteen days. Maspero occurred in October of the same year after many other protests during the interim. Depending on which account you accept, somewhere between twenty-four and twenty-seven protesters were killed at Maspero. The confrontation was not a direct political protest but began over the destruction of a Coptic church which had been the subject of a dispute with Muslims. They objected to its overt displays of Christian symbols and claimed that it was using loudspeakers. The justification for destroying the church was that it was constructed illegally. In essence, the massacre was carried out against a crowd of Christians who were protesting religious persecution.

Maspero was a peaceful demonstration in a year of many demonstrations, some of which were violent. The army had taken interim power after Muburak stepped down, a move which was initially welcomed by many Egyptians. Hosni Muburak had been in power for nearly thirty years. Egyptians had rallied against Muburak’s rule after Mohamed Bouazizi, a Tunisian street vendor, set himself alight in protest against his repressive government. It was an act that inspired uprisings across the Arab world against their governments, which came to be known as the Arab Spring.

At Maspero, the protesters were attacked by the army, nominally in charge of Egypt due to Muburak’s overthrow, with live ammunition, batons and armoured personnel carriers which they drove into the crowd. Some of the protesters were crushed in this way. While the Christians at Maspero were protesting against religious persecution, the massacre also had this wider political context.

So, the novel opens with the massacre having just taken place. Mariam is trying to deal with the wounded and the dead. In these opening pages we see the desperate struggle to house the bodies as they are pulled out of the area. The morgue is full so a hospital ward is made do. But a second battle then begins, not in deadly earnest like the one that produced these corpses, but with the parents of those who have been killed, desperately trying to retrieve their bodies for a swift burial according to their beliefs, with the doctors and protesters who demand autopsies be first performed: if we have no autopsies, no proof, the army will deny everything … There will be no swift burial of bodies and truths. There will be autopsies. There will be evidence. There will be justice.

As horrific as the opening scene is, it is this belief that evidence will change things – that a message can be controlled – that represents the idealistic revolutionary impulse. A belief not only in the system and that justice will be dispensed, but that the system can reveal immutable truths and has an interest in doing so. If Mubarak was forced from government by popular protest earlier in the year, then why not this?

It is this idealism that gives Maspero a disproportionate significance to the protagonists, particularly to Khalil. As the first anniversary of the January protests draws near, Mariam and Khalil, along with their group, plan to take the television station at Maspero to mark the occasion, since disseminating their political message is central to their cause.

But Maspero also comes to represent the slow failure of their cause. First Mohamed Morsi is finally installed as the new president, and after he is removed from office by the army President Abdel Fattah Saeed Hussein Khalil el-Sisi is treated with adulation by many Egyptians, attaining almost a superstar status with his own merchandising being sold on the streets. They fail to take Maspero, and it haunts Khalil.

In talking about this book it is impossible to overlook the fact that it was written in English and published in western countries. Despite that, it makes many demands upon the reader. The major protests, real people like key political figures or the martyrs, different factional groups and various historical contexts, are referenced throughout the novel without any explanation. Often a name is dropped into conversation which signifies the import of what is being said. However, while that name references a person who may have featured large in the news cycle at the time, it is sometimes a name that would be less remembered, especially for western readers, as the years pass. Unless you have studied the Egyptian revolution specifically or have a remarkable memory, a ready access to Google aids in reading this book.

The book is told exclusively from the point of view of the revolutionaries, which solicits the sympathy of the reader for the revolutionary cause. This is distinct from other Egyptians who may have marched but who are not the vanguard for revolutionary change. Modern technologies like smart phones and the internet were used as a weapon by these groups to disseminate information and to hold their governments to account. It is hard not to be sympathetic but one might suspect, given the relentlessness of this viewpoint, that the book is a work of propaganda. To some extent it is. It foregrounds the testimony of the families of martyrs (from what I could tell, these were fictional accounts based upon real testimony), the objectives of the revolutionaries and demonises the police, army and government throughout. The authorities are always portrayed negatively for their use violence, torture and sexual depredation, while their relationship with their people is characterised in a series of metaphors: the authorities are wild dogs hunting the revolutionaries, who are gazelles; the people are mice tricked into the governments trap, and those who acquiesce are egrets whose plumage is tainted by their rummaging through the trash, a choice they have made to survive.

Yet the book offers a more nuanced representation of the revolutionaries and their ideals than this might at first suggest. It is true that it never wavers from their cause, but at the same time it considers the realities of revolution and the deficiencies of their movement. The characters are just as unforgiving of their audience, the Egyptian people, as the narrative is of its reader, since they cannot clarify an end purpose to their protesting:

The army wants elections. America wants elections. Surely we shouldn’t? Elections are the death of politics. The ballot box exists to quell the revolution. Democracy is always on sale to the highest bidder. We want another way, a way as yet unknown.

If the revolutionaries cannot define the end point of their revolution, how can they rail against the civilian population for accepting a solution to seemingly endless violence and protest? As Hafez states, Why is revolution better than not-revolution. If you can’t answer that in a sentence, you’re losing people everyday. The lack of purpose seems endemic: We need demands that the people can understand. We can’t stand up and say we offer you the exciting unknowns of anarchism.

For much of the novel, this is their real concern. How do you tell the story of the revolution that is so large, spanning such a long period, with so many martyrs blurring one into another? How do you tell it on film without a central hero? As Mariam succinctly puts it, How do you keep selling the same story?

I think Hamilton has a larger story to tell here. The Egyptian revolution is his canvas, but what he is painting is a picture of history, and it often seems bleak. Hafez sees the pattern in the historical record:

The revolution arrives, it seems glorious and popular and invincible, something goes a little off course so the army stages a coup, people are massacred and jailed, then another general overturns the last one with promises of democracy and so on. And on and on it goes. Every single time.

Or in the parlance of the of the casino, the house always wins, just as implacably as history progress:

You think all that beautiful progress of yours, all that music of your father’s, didn’t come with a price? The same price as always. War. Always war. There can be no peace without war. The modern world was birthed by the machine gun. Don’t forget it, it wasn’t music, wasn’t your father’s jazz, wasn’t Ulysses who did shit. It was the Maxim gun. Modernism was born in the trenches. It’s the same playbook every time. War and peace. War and reconstruction contracts. Destroy the South and charge for the Reconstruction. Say you liberated a people … Progress means destruction and you have to choose which side you’re with: the steam engine or the men laying the track.

It’s a startling image that belies the naivety of the revolutionary position, that there is a way as yet unknown. Like a casino, you can choose to bet or not, but you cannot change what a casino is. The system is the same, a behemoth running on an endless cycle through history. The revolutionaries can choose to lay the track or be the train, but believing there is something else to do leaves them impotent.

Hamilton’s book is an important account of the Egyptian Revolution. It’s first-hand account, its use of headlines and contemporary reports recalls John Reed’s account of the Russian Revolution, Ten Days that Shook the World, which I felt might have been a model for this book. Hamilton is factual, but dramatic, elicits our sympathies, but is also a realist. Human nature is portrayed in all its depredations and idealistic impulses. Perhaps the optimism of the book lies in that belief of a way not yet found. For some readers, the book will feel a little inaccessible. But it is a slice of history, and Hamilton has tried to give it an immediacy and reality which demands a level of commitment from the reader as he considers the larger historical trends that guide people’s lives and governments actions in ways that sometimes feel like destiny.

Overview of the Arab Spring
Widget is loading comments... Hosni Muburak
Hosni Muburak was overthrown as president after 18 days of protest beginning in January 2011. He was detained in a military hospital for six years over a legal battle concerning the killing of protesters, after he was sentenced to life in prison in 2012. He was eventually released in March 2017.