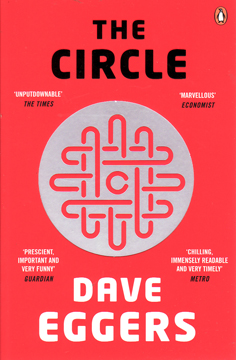 Dave Eggers’s dystopian world is our world a few years from now. There’s not much to separate this fictional view of our reality. There are a few references to driverless cars on the roads of this world, for example, but that is one of the few differentiations I can remember. Apart from that, the names of the corporations and public figures are different, but it’s basically us. The Circle of the title refers to the multinational corporation that Mae Holland is admitted to at the beginning of the novel. The Circle feels familiar because it seems to be an amalgamation of corporations we know. Its use of social media technology and its encouragement to share everything is reminiscent of Facebook. Its glossy façade and rock star appeal remind me of Apple, especially during the era of Steve Jobs whose staged announcements of new technologies were greeted with a kind of religious adulation. The Circle is a company that has ambitions to realise everyone’s dreams and make everything possible through technology.

Naturally, Eggers is interested in examining the utopian promise of this technology in the hands of a corporation unhindered by budgetary constraint or constraining laws. One of the aspects of corporate citizenship the book explores is the moral role of modern corporations as well as their potential to impinge upon traditional roles of government; in fact, to challenge the very traditions of democracy by offering a newer, more ‘’transparent’’ version of the democratic ideal.

Mae enters the Circle with the advantage of knowing Annie, a member high in the Circle. She starts in CE – Customer Experience – replying to customer queries. Through her we come to know the company and its central tenet, that everything and everyone can be known. Its computer system, TruYou, purports to be a flawless central database of everything relevant for an individual to navigate the bureaucratic modern world, with the presumption that a corporation can make many aspects of government redundant, leading to a brighter, more efficient future. This ideology is coupled with various other projects of the Circle aimed at eliminating crime and moral degradation through total knowledge, achieved through total surveillance.

The book is interesting in that the story is told entirely from Mae’s perspective; how she at first struggles to accommodate the expectations of the company, until later when she becomes entrenched in the corporate ideology of the Circle. The book cleverly balances the utopian vision of the Circle through Mae’s associations, chiefly through her parents, particularly her father who has MS, and an ex-boyfriend, Mercer, who rails against the Circle.

Naturally, there are comparisons to be made to books like 1984 and Brave New World. There are echoes of Winston Smith’s harrowing torture at the hands of Obrien in the Socratic interview which Mae undergoes with Eamon Bailey, in which Orwell’s tenets of the parent state are echoed in the aphorisms: Secrets are Lies; Sharing is Caring; Privacy is Theft. This last reveals a central ideological belief of the Circle; that information is valuable, and it belongs to the corporation.

Mercer, Mae’s ex-boyfriend, takes on a role similar to John Savage in Brave New World. He offers an important counterpoint to Mae’s perspective, and is largely why, in my opinion, the book is so successful.

There are so many things to discuss about the success of this book and what it has to say. One of my favourite aspects involved a shark, caught by one of the three Wise Men of the Circle, Tom Stenton, during a deep underwater adventure. The shark has only two scenes in the book, but they are show stealers, leaving a deep unsettling feeling in the reader.

This is probably one of the best books I will read this year and highly recommended.