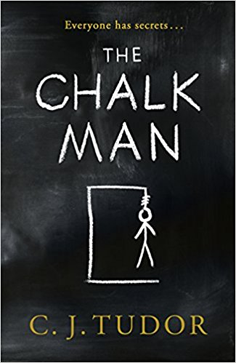 Things that happen in our past can continue to haunt us into adulthood. In this excellent and rather creepy crime thriller, Ed and his four friends live through a number of traumatic events the year they turn twelve, and these events impact on each of them in different ways. There’s a terrible accident at the local fair, a rape, and the death of one of the children’s brother, amongst other things. Each event impacts on the children in different ways and contributes to a spiralling mess with tragic consequences.

In 1986 the friends start a new game in the summer holidays to amuse themselves. They draw chalk figures on the pavement around town, leaving messages for each other. It all starts off harmless, but other chalk figures start to turn up around town, not drawn by any of the kids, with threatening images. Eventually it all culminates with the four boys following some of these chalk figures to find a girl’s dismembered body in the woods.

Thirty years later in 2016, Ed appears on the surface to have moved on. He’s got a job teaching English at the school he and his friends attended, he’s bought his childhood home from his mother when she remarried, and he still meets up regularly with two of the old group. But he’s also an insomniac with a drinking problem who has never maintained a steady relationship. Then an envelope arrives in the mail, containing paper with a chalk figure drawn on it. Another body turns up dead. Now, Ed and his friends have to finally confront the memories they have suppressed for years.

The story moves between 1986 and 2016, with both stories told by Ed, providing a consistent voice. The 1986 coming of age story is perhaps the creepiest, and reminded me in some ways of the movie Stand By Me.

The 2016 ending of the story was satisfying, with most of the elements all tidied up and explained away. But the final chapter hits with a final twist that I just didn’t see coming, which, when I thought back over the story, was actually hinted at, providing a satisfying end.

Overall this was a fast paced and suspenseful story, one worth reading if you enjoy trillers. Highly recommended.