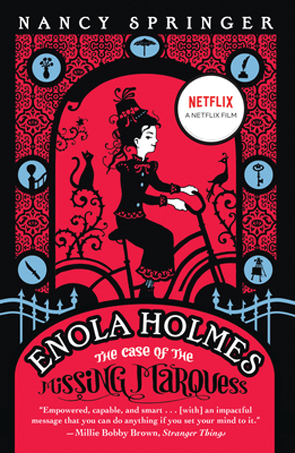 The Case of the Missing Marquess
Nancy Springer

The Case of the Missing Marquess is the first book in the Enola Holmes series. Obviously, the series plays into the Sherlock Holmes mythos, as many other books have done over the past one-hundred-odd years. In this pastiche, a new character is introduced – Enola Holmes, Sherlock and Mycroft Holmes’ much younger sister.

Enola has been raised by her mother in the country, in relative isolation from Society. Her mother has paid no heed to the expectations of how a young lady should be raised, which would normally involve education with a governess, etiquette lessons, wearing appropriate dress and undertaking suitable pastimes. Instead, she has raised Enola to be independent and to use her intelligence. When Enola’s mother unexpectedly disappears, fourteen year old Enola contacts the brothers she has not seen in ten years, since her father’s funeral. The highly conventional Mycroft is horrified at what he discovers at ‘his’ home. As eldest son, he inherited the house and the estate on the death of his father, and has allowed his mother and sister to continue living there, providing a generous income for the upkeep of the property and education of Enola, but he would not allow his mother to have control over the income from the estate. He is outraged that this mother has not used the money he has provided to maintain the house and gardens, to keep a suitable staff, or to properly dress Enola in the manner that a young lady should be dressed. In short, his mother has successfully conned him for ten years. This is a blow to his ego as well as an affront to his position as head of the family.

Mycroft instructs Sherlock to focus on finding their mother while he takes control of Enola. She rebels at a future filled only with restrictive clothing and a strict boarding school, and escapes to search for her mother. Along the way she gets distracted when she learns that the young Viscount Tewkesbury, Marquess of Basilwether, has disappeared, presumably kidnapped. Enola solves that case, not without encountering some truly nasty villains and realises her calling to become a Perditorian, a finder of lost things. By the end of the book she still has not found her mother, but thinks she has an idea of where she might have gone. I'm not sure she is correct with this idea, as it doesn't fit with the first chapter which is presumably Enola's mother on the run. With five more books available in this series, the fate of her mother could easily be an overarching theme of the series. It does seem, though, that she has successfully eluded her brothers. However, the final conversation between Mycroft and Sherlock indicates that Sherlock has reconsidered his initial thoughts on his sister’s intelligence and that he has a plan to find her.

This book has recently been made into a movie by Netflix. I'm going to horrify purists here and just say it: the movie is better than the book. While I enjoyed the book and consider that the plot is probably suitable for the age of its intended readers, the movie has a much more complex plot and is also funnier. The motive for the mother’s disappearance in the book seems to be resentment at the constraints placed upon a lady in Victorian times, against the dependence on the male head of the family for everything, and against the lack of freedom to make her own decisions about her life. It is suggested at the end of the book that the mother is living in happy freedom with the Romani.

In contrast, Enola’s mother in the movie is the member of a radical suffragette group. This group not only supports a Bill in Parliament which will provide greater freedoms for women, but also support the use of violence to achieve their aims, including the use of bombs. There is an underlying feminist theme in the book, with the resentment both Enola and her mother have at being mere chattels controlled by their brother/son, but there is only a passing reference to the suffragette movement. Rather than joining a political movement, the mother of the book looks to have only considered her own freedoms in her supposed escape with the Romani. Having only read the first book, I could be wrong in this assessment – later books in the series may further develop the mother’s story, and thereby incidentally fit more successfully with the expectations created by the opening chapter of this book. The opening chapter seems to feature the escaping mother hurrying to avoid capture in London and does not link to Enola's idea at the end of the book of where her mother is hiding. I will be reading more books in this series, so will hopefully learn more of the mother's storyline and resolve that conflict between the opening and closing chapters.

A main difference between the book and the movie is the relationships between the characters. While the character of Enola in the movie is faithful to the book, showing her as naïve but resourceful, brave and quick-thinking, her relationship with her mother is very different. The movie Enola has a wonderful relationship with her mother, making it easy to understand her loss when her mother disappears, and her motivation in looking for her. The book Enola has a more troubled relationship with her mother. She is usually left alone to do as she wishes and often feels like she is the cause of social embarrassment for her mother. For much of the book Enola also believes social embarrassment caused by the birth of a child born much later than her siblings is the cause of her brothers’ estrangement. We are well into the book before she understands the friction between her mother and Mycroft over the question of who would control the estate and the money which came from it.

The Sherlock of the movie comes across as a sympathetic character. Although initially shocked by his unconventional sister, he later appears at odds with Mycroft over what should be done with her, and ultimately persuades his brother to sign guardianship of Enola over to him. The Sherlock of the book appears more conventional, noting to Mycroft that they need to explain things to Enola in simple terms that she is able to understand, given the limited cranial capacity of her small head. He doesn't make too many appearances in the book, and it is only near the end that you start to get an idea that his thoughts on his sister’s intelligence and capacity for looking after herself are changing, but it’s not explicit.

Overall, I enjoyed this story and look forward to reading the next book in the series. Neither of the mysteries in the book are particularly complex, but there are moments of action and excitement, and I cared enough for the character of Enola to want her to come out of the story triumphing over her brothers. 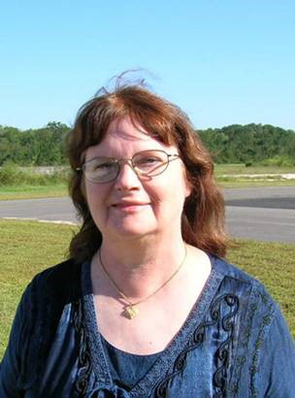 I would very much like to know why my mother named me “Enola,” which, backwards, spells alone. Mum was, or perhaps still is, fond of ciphers, and she must have had something in mind, whether foreboding or a sort of left-handed blessing or, already, plans, even though my father had not yet passed away.

- Opening lines of The Case of the Missing Marquess