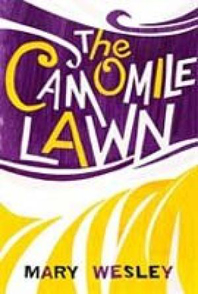 The Camomile Lawn is the story of four cousins, and their friends and relatives, who gather in Cornwall for a summer holiday in August 1939. The outbreak of WWII is imminent, all know that it is coming, although some refuse to accept it. The story switches between a direct telling of their wartime experiences and the reminiscences of those who survive as they each journey back to Cornwall 40 years later for a funeral.

A main part of the story is the changes to attitudes and behaviours during the war. This is an upper middle class group of people. Polly and Calypso, the two girl cousins, find it especially liberating and live in a way that would have shocked people in peacetime. Pre-war they were raised with expectations of how they were meant to behave, but living in London during the blitz, with their family and lovers all fighting in Europe, frees them from their conventional upbringings. As Polly says at one point "girls like me were brought up to be respectable".

The focus of the book is the female characters. While the war is always present in the background, this is a story about their lives in the war, not the actual war. We get the air raids, the houses destroyed by bombs, friends being killed, the lack of servants, but these are never the main focus, this remains firmly on the people and their behaviour.

All of the characters’ lives are interconnected, and each has some quirk or kink. Some aren't terribly likeable but most have a redeeming feature, or show a vulnerable or sympathetic side. Only one character ends up completely unlikeable and without any redeeming side. For most of the book he is only mentioned, he is in a concentration camp and no one knows if he will survive. So, we should be happy that he survives, but he turns out to be filled with hate, and loved by no one. He ultimately is responsible for destroying the last reminder of that summer holiday in 1939 when he declares his intention of digging up the camomile lawn.

There is one disturbing aspect to the book which is only a minor side. Middle-aged Richard's interest in young girls seems to be known by all, and accepted by all. Sophy, the only child in the family, is a victim, but cannot say anything. Trapped away from everyone she loves in a boarding school, Uncle Richard is the only person who writes to her. These weekly letters are the only pleasure she has at her hated school where she is bullied for being different (illegitimate & appears mixed race). Her older relatives know, but think it is harmless & overlook he behaviour. I was expecting this to be further developed later in the story, but it quickly gets forgotten about.

Overall I loved this book. I think it captured the feel of the people whose lives were freed from their conventional upbringings to live as they wished and to enjoy themselves as they wished. And does it in a way that is a pleasure to read.