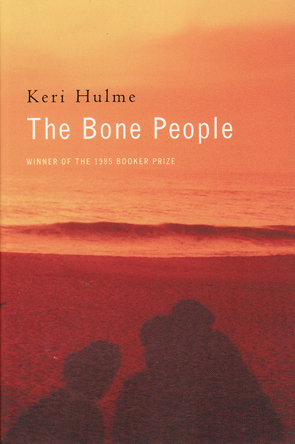 So, the first thing is the protagonist’s name: Kerewin Holmes is similar to the author’s own name and, one suspects, the character is her surrogate in the story. Keri Hulme’s The Bone People tells the story of Kerewin’s unexpected contact with Joe and his adopted son, Simon. Simon, a mute boy – he vomits if he tries to speak – breaks into her house. Actually, Kerewin’s house is a tower she constructed near the coast with the money she won from a lottery, which allows her to live isolated not just from society, but from her estranged family. Simon’s intrusion is therefore quite unwelcome, but he is a child, it is difficult to communicate with him, and when she makes a phone enquiry, she is informed by the police that he is known for his wandering, even his vandalism. She is asked to keep him with her until the boy can be collected by family.

I make the point about Kerewin being a surrogate for Keri, since I felt while reading this book that the author was sometimes too close to her material. In her author’s preface she explains how the novel was written over a period of 12 years and was rejected by several publishers. Except that the book was accepted by an independent feminist press, she claims she was going to embalm the manuscript in a perspex block and leave it at that. Yet even the preface gives a sense of why the book was rejected and the problems the novel still carries. Hulme was unwilling to take advice about inconsistent punctuation and expression. Let’s leave that one down to artistic licence. But the preface ends with an explanatory dream which only leaves the reader puzzled as to its relevance. As a sop to her obscure explanation, she suggests, Make of it what you will. Dreams appear throughout the novel and their purpose and meaning are not always clear. For instance, Kerewin dreams that her teeth have turned into bloody stumps. It all seems very symbolic, but of what I am unsure. Are the teeth meant to be linked to the dream of the tower struck by lightning almost a hundred pages later, since Kerewin later turns her tower into a kind of stump when she demolishes its upper sections? Yet after that dream all she thinks is, A falling dream, and the Tower of Babel? Astral travel, and the House of God? What does this mean? Some sections of the novel reminded me of bad student writing I have received from students who have advocated that obscurity is concomitant to deeper meaning.

The problem is exacerbated in the novel’s prologue which is four short snippets alluding to aspects of the characters’ lives which, told as they are, are disorientating. I found myself returning to this opening section after I finished reading to make more sense of it. Even on a first read, however, it is clear enough that Simon has been shipwrecked and adopted by Joe and his wife Hana, and that Hana and their son Timote have died prior to the start of the main story. It’s also clear that Kerewin lives isolated in her tower. But the first section of the four in the prologue defies explanation until the novel is complete. Three subsections in it introduce Simon, Joe and Kerewin (all unnamed) in turn, and then speaks of them together in a fourth: “Together, all together, they are the instruments of change.” As the prologue title indicates, this is “The End At The Beginning”. So, Hulme is willingly reveals there will be a happy ending, although what the main obstacles are and how they are overcome are the story. But how each section of the prologue links to each is difficult, especially given the disorientation of the first. It seemed to me that the prologue was unneeded and was unnecessarily obscure. For anyone contemplating reading this book I would even suggest skipping it until the end.

Despite this, this novel tells a very engaging story about the relationship between Kerewin, Joe and Simon. I felt that the developing relationships and characterisations were realistic and well controlled. Each character is a victim of estrangement or loss. Simon has lost his parents to a shipwreck, of which he is the only survivor. Joe has lost his wife and son and struggles with grief and his rages which inflame his dealings with Simon, who is difficult. Joe beats him, even though he loves the boy. And Kerewin has cut off her family after a dispute over a coffee mill owned by the family. She not only lives alone as an artist but has never really connected with anyone. She has no interest in sex and has never had sex. She is reticent to allow Joe too close lest his expectations become too great.

Naturally, this scenario sets up certain expectations – the back of my copy describes the book as a “love story” – although Hulme is happy to subvert these expectations. The developing relationships between the three characters is only one aspect of the novel, however. Of great importance, also, is the Maori ancestry of both Kerewin and Joe. Kerewin describes herself as looking more white than Maori, but she is still immersed in the culture and knows the language, as does Joe. Their conversations are littered with Maori words and phrases which are translated at the back of the novel, although Hulme usually gives them enough context in the writing to make their meaning clear.

The Maori idea of hospitality and family, for instance, is important: “Once the guest has eaten and drunk at your table, the guest becomes kin … beggar or enemy, friend or chief, if they knock on your door, it will open”. It is a belief that underlies Kerewin’s acceptance of Joe and Simon, of Joe’s rescue by the Kaumatua, a wise man, as well the novel’s denouement. The Kaumatua contextualises the suffering of Joe’s family through Maori legends of the underworld and the journey of the soul. He gives Joe’s suffering the import of archetype, fashioning him as the suffering man for whom he has waited, the narrative thereby implying archetypal possibilities for Kerewin and Simon, also: the digger and the stranger. In doing this Hulme attempts to associate her domestic drama of violence and estrangement with the wider plight of the Maori people; the problem of identity and purpose. On the personal level, Kerewin reflects the problem:

I don’t want to die, but I don’t know why I live. So what’s my reason for living? … Estranged from my family, bereft of my art, hollow of soul, I am a rock in the desert. Pointing nowhere, doing nothing, of no benefit to anything or anyone. Flaking, parched, cracked … so why am I?

The Kaumatua translates this existential despair to the level of a cultural dilemma:

I was ten years old, a smart child. I’d been brought up to speak English. I even thought in English. I still can … they spoke Maori on the farm sometimes, but they were no longer Maori. They were husks, aping the European manners and customs. Maori on the outside, with none of the heart left…

This is where Hulme is most successful, I believe, in articulating the issues of identity, belonging and purpose in the novel, rather than her more obscure passages. Her book powerfully portrays the self-destructive impulses that arise from these predicaments, and explores moral greys concerning child rearing and child abuse, in an attempt to understand rather than condemn the dark places to which human beings can be driven.

As a result, the novel remains a hybrid of cultural symbols. The Kaumatua is a peculiar mix of a kind of religious swami as well as the cannibal who is purported to have eaten his grandmother. Kerewin’s tower, the subject of her dream, recalls associations of towers from western culture: the sequestering ivory tower; the imprisoning tower of the princess. In particular, I was reminded of the Lady of Shallot, her weaving transmuted into Kerewin’s art, Kerewin’s isolation broken not by Sir Lancelot but by Simon and Joe. When Kerewin first sees Simon it is through a window, like some weird saint in a stained gold window. Of her personal isolation, Kerewin speaks of being in limbo. Yet the perspective reflects distinctly Maori concerns. The Kaumatua’s concern is for the environment and the soul of the country, represented by the godholder, the stone brought on one of the original canoes he protects that brought the Maori to New Zealand.

I found the denouement of the novel less satisfying than the bulk of the story. Hulme tends towards mysticism as the novel progresses, which, as I have suggested, is not always clear in its intent. The unifying themes related to Maori identity are also somewhat clumsily reiterated in the closing pages of the novel. As a result, I found this to be a powerful novel when it dealt with the domestic, personal story of Kerewin, Joe and Simon, but I don’t think Hulme had complete control over the cultural story she was also trying to convey, or the means by which she was trying to achieve that. I would recommend this book to someone I knew, with reservations. But if I was to recommend a Booker Prize winner to someone interested in reading from that list, this book would not feature as high as many others I have already read. 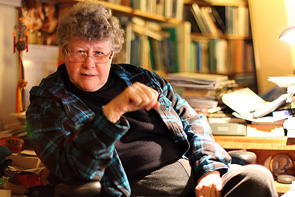 It [the country] despaired of us, remember. It is asleep ... maybe its very sleep keeps the living things away, except for flies, who come to the sleeping and dead alike. Aue! the one thing I regret about dying is that, secretly, in the marrow of my heart, I have always wanted to see what happens when it wakes up. He sighs. Maybe we have gone too far down other paths for the old alliance to be reformed, and this will remain a land where the spirit has withdrawn. Where the spirit is still with the land, but no longer active. No longer loving the land. He laughs harshly. I can't imagine it loving the mess the Pakeha have made, can you?