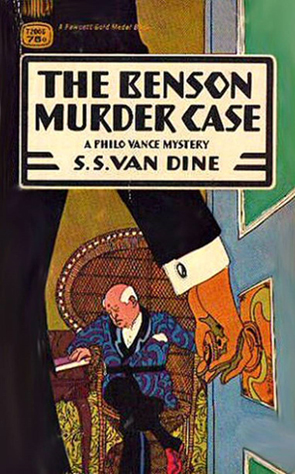 I’ve recently become interested in reading Golden Age mysteries again, and have acquired several books that are said to be classics, from writers I’ve never read before. Or, in the case of this book, a writer I hadn’t even heard of until recently. S. S. Van Dine is the pseudonym used by Willard Huntington Wright, an American art critic, to write detective novels. Apart from his detective novels, Van Dine is also known, I have now learned, for writing the ‘Twenty Rules for Writing Detective Stories’ in 1928, which he said every respective mystery writer should follow. The following is a selection from those rules:

Of course, many prominent Golden Age writers routinely broke these rules. Agatha Christie, the Queen of Crime, broke many of them in some of the best mysteries ever written, although, to be fair, I don’t think she ever broke the first rule. And from having read the Benson Murder Case, I’m not sure that Van Dine stuck to his rules, himself, especially the last one I have listed. I would say that having his main character drop (untranslated) French and Latin terms on almost every page could be considered literary dallying in the extreme!

The Benson Murder Case introduces a new amateur detective, Philo Vance. Vance seems, to me, to be very similar to Lord Peter Wimsey, Dorothy L. Sayers’s aristocratic detective, with his posturing, snobbery and affectations, such as the English accent and manner of speaking that he maintained. While, with Wimsey, we as readers understand that his mannerisms are mostly an act, put on either when he is detecting or when he is bored. I'm not sure that this is the case with Vance. He really seems obnoxious a lot of the time, destroying evidence at the crime scene and maintaining a superior attitude to almost everyone else throughout the book. Vance also reminds me of Hercule Poirot, with his insistence that the police should look at the psychology of the crime rather than actual evidence, but without Poirot's endearing qualities.

The book is narrated in a similar manner to the Sherlock Holmes books. Van Dine identifies himself in the opening pages as a trusted friend and companion of Vance, having faithfully chronicled his exploits. This is an interesting choice, I thought, as one of Van Dines’s Rules (rule 20 - see below), seems to be aimed against Doyle, in particular, and the methods of his character, Sherlock Holmes: that, “no self-respecting detective story writer will now avail himself of …The dog that does not bark and thereby reveals the fact that the intruder is familiar.”

The mystery is based around the murder of Alvin Benson, a playboy stockbroker, who is found dead in his New York brownstone mansion, shot in the head. Apparently, this story is loosely based upon an actual crime, the unsolved murder of Joseph Bowne Elwell in 1920. That murder may have been unsolved, but Vance does not allow Benson’s criminal to go undetected. This is the first time Vance has attached himself to any detection work. He is a close friend of the District Attorney, Markham, who is investigating the murder in association with Sergeant Heath. Vance has previously told Markham that he would be interested in observing a crime close up, and Markham invites him to view the murder scene. Vance, although appearing bored and uninterested at the scene and contemptuous of the police methods, decides to assist with the solving of the murder.

He does this while constantly belittling the efforts of Heath and Markham, and claims that he knew exactly what had happened within minutes of arriving. I’m not actually sure why he does this, but he doesn’t give the professionals any of his insights upfront; he just says they are chasing dead ends and should focus on the (undisclosed) aspects he considers more important. In this, Vance is very unlike Lord Peter who has a close relationship with police and shares every clue he uncovers and every thought he has with the professionals. Had Vance done the same the whole mystery could have been wrapped up in about half as many chapters as we have here. Vance lets the detectives suspect and build cases against a number of different people and waste a lot of time, before he finally deigns to reveal what he thinks is the truth. Although, to be fair, I did enjoy his proposing a number of seemingly plausible solutions that he knew to be wrong before finally revealing the truth. That reminded me of the end of the movie Clue, and it was quite clever.

Despite all these criticisms, I did enjoy the mystery. The story was fun, and I thought many aspects of it clever, such as the way one character’s alibi is broken. I just didn’t take to the main character and found him obnoxious.

The full movie adaptation of the The Benson Murder Case. 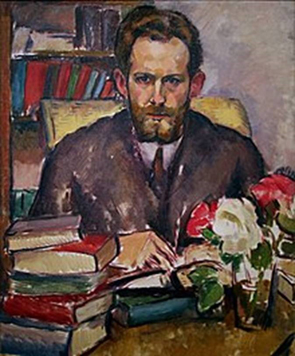 S.S.Van Dine
Portrait of Willard Huntington Wright (S. S. Van Dine) painted by his brother Stanton Macdonald-Wright, 1913-14. By 1928, with the publication of the first three Philo Vance books, Wright was one of the best-selling authors in the US.