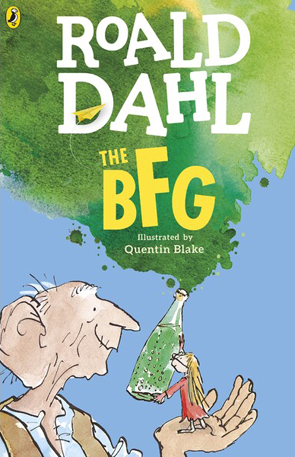 This story starts off quite badly for eight-year-old Sophie. Unable to sleep one night because of the light coming in through her window, she gets up to pull the curtains shut. She sees a strange figure walking up the street and realises it is a giant. Unfortunately, the giant also sees her and snatches her out the window and takes her back to Giant Country with him. But things seem to improve for Sophie when she realises she has been kidnapped by the Big Friendly Giant, BFG, who does not eat children, or even grown-up ‘human beans’. The story then becomes a bit of a roller-coaster, with Sophie alternately happy to get to know her new friend better, then terrified of being eaten by the other giants who most definitely aren't friendly, then charmed to learn about where dreams come from, then horrified to realise how many other children are being eaten by the giants every night.

I'm sure all of these changes in emotion help children stay gripped by this quirky little book. Dahl takes a gruesome idea of being captured by the giant and turns it into a charming book about friendship and love between two very different people whose only common ground initially seems to be that they are both lonely.

A common factor in all Dahl's stories is his inventive and humorous use of language, and he is at the top of his game in this book, with the wonderful language used by BFG. It's a combination of made up words, spoonerisms and puns. Even descriptions of why different people are eaten by giants is made funny with the way their various tastes are described, such as the people of Sweden having a ‘Sweden sour taste’, or the people of Chile being ‘good to eat on a hot day’. My favourite by far however was calling Charles Dickens ‘Dahl's Chickens.’

And in amongst the humour, there are a few ethics debates to give readers something to think about. Sophie is horrified to think of the horrible giants eating children every night until the BFG challenges her with the thought that giants treat humans the same way that humans treat animals.

'Even so,' she said, defending her own race, I' think it's rotten that those foul giants should go off every night to eat humans. Humans have never done them any harm.'

'That is what the little piggy-wig is saying every day,' the BFG answered. 'He is saying, "I has never done any harm to the human bean so why should he be eating me?'

Sophie really doesn't have an answer for this. I note, however, that by the end of the book BFG is happily eating bacon and eggs and sausages for breakfast, so it doesn't seem like his vegetarian ideals lasted.

But consideration of the ethics of a carnivorous diet pale in comparison to the biggest philosophical debate in the book - are farts inherently pleasurable? And more importantly - are farts ‘better’, that is, more socially acceptable, than burps? The BFG is quite clear in his views - 'Burping is filthsome,' the BFG said. 'Us giants is never doing it.' This contrasts quite nicely with Us giants is making whizzpoppers all the time! Whizzpopping is a sign of happiness. It is music in our ears! You surely is not telling me that a little whizzpopping is forbidden among human beans?

The Queen however is not so impressed: 'I prefer bagpipes,' she said. But you get a feeling she is only saying that to keep to the expected protocol, as the next line reveals, But she couldn't stop herself from smiling.

And kudos to Dahl for managing to get so many fart jokes into this book without once using the word ‘fart’. I'm impressed, even if the Queen isn't!

This was a delightful read. I have an idea that the ridiculousness of parts of this story would be more enjoyed by children than adults. Sophie is much smarter and braver than the adults who are supposed to be aiding her at the end of this book, and that is typical of Dahl’s books. Adults can be dull or vicious or just stupid, and children suffer under them. Children feel that Dahl understood them and that he was writing for their pleasure, not for the adults. He gave them a world where they could feel powerful and in control, a world in which they can triumph over adults. That world might be a little gruesome for some adult tastes. 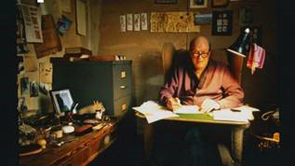 Roald Dahl in his writing hut, where he wrote all of his books for children from the mid-1950s 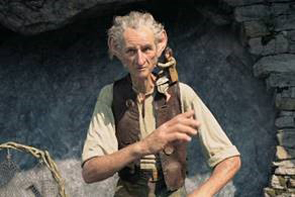