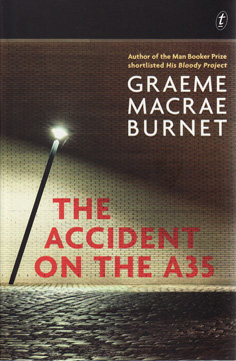 The Accident On The A35
Graeme Macrae Burnet
bikerbuddy

Graeme Macrae Burnet’s third book, The Accident on the A35, is a companion piece to his first book, The Disappearance of Adèle Bedeau. Both are purportedly the work of the fictional author, Raymond Brunet, who killed himself by leaping in front of a train in 1992. Both books employ metafiction – the preface and afterwords which use Brunet’s life to contextualise the main novel – to suggest a layer of significance only hinted at in the story. It is the fascination of the found manuscript and the perennial interest in the real life behind fiction that Burnet (Brunet is obviously an anagram of the real author’s name) exploits.

I believe one of the pleasures of crime fiction texts, particularly the old cosy fiction of Agatha Christie’s era, lies in its promise of revelation and the reestablishment of order. As I read this book I had this in mind when considering the expectations of readers. How would this book be received by a fan of mainstream crime fiction? Who is this book actually written for? I think an easy answer to the second question is that it is written for readers already familiar with Burnet’s writing, who understand his tendency to subvert traditional crime fiction tropes. So, a further question is whether this novel would satisfy the expectations of his established readers; his fans.

To my mind, the first novel is more accomplished, even if it does deal with similar ideas and themes, and I think many fans would think so. In fact, assuming the role of translator rather than author, Burnet writes in the afterword that the putative ‘author’ of the work, Raymond Brunet, had been criticised by a reviewer as having only one idea, and not even a good one at that. It’s a fascinating conceit, employed in Burnet’s first novel, and used by other authors (Umberto Eco’s The Name of the Rose, for instance, or Jorge Luis Borges Fictions), that the author is merely an intermediary – a translator or editor of the work - not the primary creative force.

The tone, setting and story are similar to The Disappearance of Adèle Bedeau, as Burnet also points out: the characters have stepped from the same playbook.” There are similarities in the story, too. While the basis of the story, this time, is not a disappearance, the incidents both serve the plot in the same way. Bertrand Barthelme, a well-known lawyer from the town of Saint-Louis, France, dies while driving his car home along the highway. Georges Gorski, the town’s chief of police, the same character from The Disappearance of Adèle Bedeau, takes it upon himself to go to Bertrand’s house to inform his wife, Lucette, and his son, Raymond, of his death. It’s a straight forward procedure and Gorski’s involvement should have ended with the visit, but Lucette asks Gorski to find out where her husband was the night he died. Gorski, burdened by his own disintegrating marriage, alienated at the office and finding himself attracted to the widow, agrees to look into it.

The story, itself, is well-written and has all the atmosphere of the previous novel: the seedy bars, the French streets of Saint-Louis and Gorski, the intelligent cop, alienated from his peers and living in the shadow of his successful wife and her father, the mayor, to whom, Gorski suspects, he probably owes his promotion to chief of police. Added to this is the character of Raymond who felt to me like a younger Gorski. Socially awkward and brainy, he acts like another detective in the story as he follows a lead he finds in his father’s study. He becomes involved with Delph, a girl who lives at an address his father had written down, and her wannabe bohemian friends who know Sartre as well as Raymond. The story of Raymond parallels Gorski, each torn between different women, each of them alienated and searching for something they lack.

I felt that the novel, as a crime fiction, was not as fascinating as I remember the previous novel to be. I think the pace and interest in Burnet’s narrative is hampered by the fact that his case really isn’t all that compelling, involving an accident on the highway and all the attendant dirt one might dig up on any dead man if one went digging. During the course of the story, Burnet links Gorski’s case to another case, a murder, based on a hunch. Gorski’s now dead mentor, Ribéry, always advocated the importance of the gut over the head, but Gorski’s fellow investigator, Lambert, with his slap-dash methods and questionable ethics, has the reader questioning that methodology. The hero detective, the intelligent and instinctive investigator of much crime fiction, is deconstructed by Burnet’s representation of this investigation, and their methods are either going to please some readers or bother traditionalists.

My second consideration was whether the digressions and literary appropriations in the novel had substance, and would please Burnet fans, or whether they were merely literary fluff and distraction. In The Disappearance of Adèle Bedeau, Burnet’s references to Zola and Simenon seemed to hint at the purpose of his own novel beyond its trappings of crime fiction. Both Zola and Simenon get a mention in this book, too, although I felt it was done to create a stronger sense of connection back to the first book. It’s evident that Burnet knew he had to add something new to this recipe. In attempting to do so he appropriates Sartre’s The Age of Reason, making Boris’s theft of the knife in that novel and the scene with the knife and Ivich a central motif in this novel. This is introduced through the son of Bertrand, Raymond, who, as Burnet points out quite unnecessarily, is a literary representation of his fictional author, Raymond Brunet, typical of a roman-à-clef. Brunet, we are told, committed suicide in 1992 by throwing himself under a train. In a scene that one supposes anticipates its author’s demise, Brunet has his character, Raymond, think similar thoughts:

It would be a simple matter to step off the kerb in front of a passing truck. Raymond imagined the sound of brakes, the impact of the cab on his ribcage, his skull cracking against the radiator. Then an easeful slump to the ground…

Raymond exhibits all the instability and anguish of his imagined writer, it is implied. And this shows in the way that Raymond becomes driven by Sartre’s literary antecedent. In the end, this was a strength and a weakness for me. As a weakness, I felt that Raymond’s fascination with Sartre’s characters and their philosophising provided one of the few strong plot points in this novel. While Gorski’s story is one of an older man, caught between his responsibilities and desires, his ambitions and his cynicism – bound by moral freedoms not attendant upon the younger Raymond – Raymond is free to explore not only his own nascent sexual proclivities, but intellectual obsessions. Raymond is fixated upon the scene in Sartre’s novel in which Ivich and Mathieu slash their own hands with a knife in a bar. Boris’s theft of the knife and this scene form a backdrop to Burnet’s novel which creates a sense of expectation in the reader. One gets the point that Burnet has abandoned the conventional crime plot in order to fixate upon this literary scab, but I also wondered whether, as a roman-à-clef, which is what the novel is supposed to be, that Burnet dabbled with the postmodern play of endlessly deferring authorship - Matthieu and Ivich’s actions are obsessed over by Raymond, as they are creatively inspiring for Brunet, as they are for our real author, Burnet, whose name is an anagram for Brunet, whose name is also taken from a character in Sartre’s novel – that Burnet neglects the traditional joys of crime fiction to his detriment. I guess what I am saying, is that sometimes an author can become a little too self-conscious of their craft.

Yet this is the sort of thing Burnet fans would be expecting. I guess one’s judgement of all this lies in how one views Burnet’s use of his two main characters, Gorski and Raymond. Luc, a friend of Delph, a girl Raymond follows in his investigations, tells Raymond that Sartre’s Matthieu lacked freedom, a subject upon which he obsesses, because he thought too much: that he lacked spontaneity. But it is the end of Sartre’s novel that Matthieu realises he lacks freedom, not for this, but because he cannot accept the responsibility of his own actions, leaving him incapable of making meaningful choices. This is different to the earlier Mathieu who stabs his own hand, recklessly flirting with Ivich when he is burdened with the responsibility of Marcelle, with whom he is pregnant. Gorski seems like the Matthieu in the closing pages of the novel, burdened by choices and a failing marriage, and unable to take charge of his life; Raymond is mostly like the reckless Matthieu whose choices are yet to reveal the road he must take. Is this what this novel is: a study in moral freedoms and an homage to Sartre’s existential philosophy?

Lovers of conventional crime fiction will possibly find this novel disappointing. Burnet, as in his first novel, is interested in character studies and playing clever literary games. I enjoyed the book, but the second-time round, I didn’t think this was as interesting as the first novel; not as well executed. It would be interesting to see what Burnet does next. He is an excellent writer and I wonder what he would produce if he abandoned his literary masks. 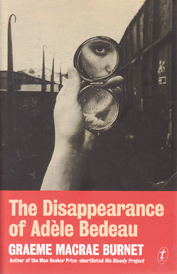 'Is that what freedom is?' he thought. 'He has acted: and now he cannot go back: it must seem strange to him to feel him an unknown act, which he has already almost ceased to understand, and which will turn his life upside down. All I do, I do for nothing. It might be said that I am robbed of the consequences of my acts:everything happens as though I could always play my strokes again. I don't know what I would give to do something irrevocable.'

Mattieu in The Age of Reason