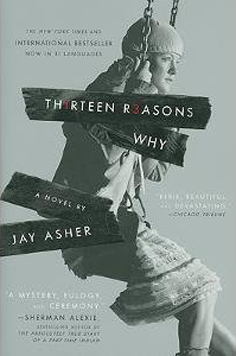 I picked up this book after an unplanned weekend binge watch of the Netflix rendition of the 2007 Jay Asher novel. I had never heard of Asher or the title prior to that. What peaked my interest was the cinematographic techniques used in the show. I couldn’t imagine how the story would be portrayed with similar success in a novel, so I decided to order a copy.

The story is told from the perspective of Clay Jensen, a high school boy who returns home one day from school to realise a package has been delivered; a package with no return address. He opens the package to find a set of 7 cassette tapes, marked one through thirteen with a blue marker. Curiosity drives him to immediately play the tapes, being awestruck to find the tape is a voice recording of a high school classmate who has recently committed suicide, Hannah Baker. Having hatched a plan before taking her own life, Hannah’s voice recordings tell thirteen stories about thirteen students at her school which sequentially left her no hope but to give up on life.

Jay Asher’s novel is unlike any other book I’ve read before, which isn’t saying much considering I can’t remember the last time I read a fiction novel. For the better part of the last decade I have been solely interested in autobiographies/biographies and true crime. Regardless, Asher’s writing style in this book is quite unique. The book changes almost line by line between Clay’s narration of the present and Hannah’s story telling.

For those who haven’t heard of Netflix’s remake as a TV show, I strenuously suggest you read the book first. The book provides a more meaningful expression of Hannah’s experiences which led to her death than the TV show ever did. Notwithstanding, the first thing I recommend after finishing the book is to catch the show. The show does do some quite stunning things, cinematographically speaking. Ideally, you won’t binge through it in one weekend like I did, but if every other viewer’s habit is anything to go I suspect you’ll probably end up doing the same thing.

One other thing I really liked about the book is the author’s Q&A in the back of the book. Asher explains that many of the themes and incidents which occur in the book were based on something Asher witnessed in his old high school days. Furthermore, Asher explains that he chose ‘thirteen’ reasons to be punny about Hannah Baker’s name (which I embarrassingly did not pick up on until I read the Q&A). He also states he got the overall idea of the story when he was in a museum, listening to an audio tape of the tour guide on tape. She explained everything to him in such detail without even being there. Definitely an eerie thought if you thinking to deeply about it.

I highly recommend this book (and show) to anyone who enjoys adult theme-infused dramas.