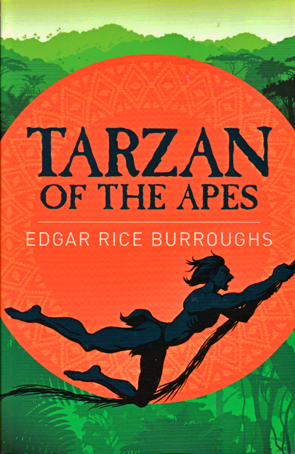 Tarzan is one of those characters that everyone is familiar with, even if they’ve never read a single Tarzan novel. There are enough films based on Edgar Rice Burroughs’s creation for a start, including an animated version by Disney and a television series adaptation I watched when I was young. I was first introduced to the character during Saturday television matinees of Johnny Weissmuller’s Tarzan movies. Weissmuller was an Olympic gold medallist and my mother proclaimed him the real Tarzan, in the way that some will swear that Sean Connery is the real James Bond, and made me watch any scene in which he swam because that was something special, obviously. It wasn’t until many years later that it occurred to me that my mother may have been admiring more than Tarzan’s swimming prowess. Later, Hugh Hudson’s Greystoke: The Legend of Tarzan, Lord of the Apes starring Christopher Lambert, caught my imagination in much the same way that reading Shelley’s Frankenstein would transform my understanding of Karloff’s screen creature. Here was an interpretation of the character missing in the ‘Me Tarzan, you Jane’ movies I watched starring Weissmuller.

Hugh Hudson’s version is closer to Burrough’s Tarzan than other adaptations (based on the movies I have watched), but there is still a lot that is surprisingly different in story, character and themes. In this first novel (Burroughs was to write twenty-four in the series, some published posthumously) Tarzan is orphaned after his parents are marooned on the coast of Africa following a mutiny, and then later killed by apes. Tarzan’s parents are from English nobility. His father, John Clayton, is Lord Greystoke, recently married to Alice Rutherford. Forced to survive in a hostile environment, Clayton takes the time to build a quality cabin to house his wife and soon-to-be-born son. Luckily, they have been put ashore with all their belongings, since the mutineers fear being caught with them. Later, as Tarzan grows older, the cabin will prove too alluring and his parents’ belongings will prove useful. A knife will give Tarzan a chance against stronger animals, but the children’s primers and other reading material will allow him to teach himself to read over the course of several years.

First, Tarzan is a great adventure story which is highly entertaining. I expected that its ideological assumptions might be outdated, and they are to a degree, but not cringeworthily so. Perhaps the most cringeworthy moments occur in moments of passionate intensity between Tarzan and Jane Porter, a young woman marooned with her father and others after yet another mutiny precipitated by the treasure they have found. Yes, Tarzan saves her, like a traditional damsel, but he also saves each and every one of her company in turn, as they each find their own separate perils, as well as saving the French naval officers who come to rescue them. So, while there has been a backlash against damsels in distress in recent years, Jane is merely a part of a group in distress, and she is somewhat more capable than any of them. Her father, Professor Porter, is absent minded and divorced from reality. Philander, his secretary, seems singularly incapable of helping the Professor stay out of trouble. Esmerelda is hysterical and Cecil Clayton, the new Lord Greystoke (that’s right, he is related to Tarzan) is no more capable of looking after himself in the jungle than any of them. Besides, he loses our sympathy, somewhat, over his jealousy of Tarzan who has clearly caught Jane’s eye, although he is much preferable than a later suitor, Robert Canler, who literally attempts to force Jane into marriage in payment for her father’s debt to him.

Similarly, the novel’s attitude to race is also somewhat ambivalent. Those looking for racist tones in the book will find them. When Professor Porter and Philander find the skeletons of John Clayton and his wife in the cabin, they judge them to be a male and female of the higher white races. Yet, cherry picking an old book like this can be a little simplistic. While Professor Porter is prejudiced against the race of Moors, for instance, Philander argues that the civilisation of the Moors was far in advance of European civilisation until their defeat by the Spanish, and attributes qualities such as toleration and broadmindedness to them. Yet as Lieutenant D’Arnot leads Tarzan towards civilisation he must prevent him from killing black people whom Tarzan assumes are enemies. Do not assume they are your enemies until they prove it, D’Arnot tells him. Tarzan has had to survive against a tribe of black Africans, so his prejudices may be somewhat justified. But his response to unknown whites – the Porter party disembarking from their ship – is not violence, but curiosity, and he chooses to watch what they do.

It’s a situation that reminds me of Frankenstein’s creature, watching the De Lacey family in secret, hoping to learn something of his own humanity from them. Tarzan struggles with his dual identity as a leader among apes, while understanding that he is a man; with the customs of the apes who raised him and his inherent nature. Tarzan is drawn to the Porter group because he has outgrown the apes with whom he has spent his life and desires to learn more about what he is. When he meets Jane his urge is to forcibly take her, but he also intuits there is something wrong with this: True, it was the order of the jungle for the male to take his mate by force; but could Tarzan be guided by the laws of beasts? Was not Tarzan a Man? And when he kills Kulonga, the son of the king of the black village nearby who has slain his ape mother, Kala, Tarzan refrains from eating him as would be the custom among apes for a vanquished enemy: All he knew was that he could not eat the flesh of this black man, and thus hereditary instinct, ages old, usurped the functions of his untaught mind…

It is this hereditary instinct that expresses much of the ideological assumptions of the novel. Tarzan is a hereditary English nobleman, and as the hero he demonstrates the innate superiority of class, even when abandoned by fate to the jungle. He does not rape Jane nor eat Kulonga because civilisation, with its heritage and heredity, is essentially stronger than nature (heredity spoke louder than training), which has been his handmaiden. Tarzan, then, is an exemplar of the natural order, not as a pseudo-ape living in the jungle, but as head of the ‘natural’ hierarchy of the social order. It is not enough that Tarzan can kill a lion with his lasso and knife, but he must vanquish the beast with that most English of wrestling moves, the full Nelson. As an English nobleman he naturally rises, and the culmination of his success is to kill the king of the jungle himself. He is described as a superior being, of possessing a noble face. Jane observes his sexual potency: the graceful majesty of his carriage, the perfect symmetry of his magnificent figure and the poise of his well-shaped head upon his broad shoulders; but also senses his qualities are drawn from a heritage which is still a mystery to her: It was the hall-mark of his aristocratic birth, the natural outcropping of many generations of fine breeding, an hereditary instinct of graciousness which a lifetime of uncouth and savage training and environment could not eradicate.

So, Tarzan of the Apes is a fun adventure story with some social class baggage. But it is also possible to look at it as a forerunner to twentieth century romance novels. Mills and Boon publishers tend to produce romances aimed at women set in exotic locations with fantasy men who are rich/powerful/intelligent/exotic. And read in this way the novel takes on a different tone. Tarzan is an exotic other, hyper-masculine, a fine physical specimen, incredibly handsome and instantly desirable. His class provides that mysterious frisson which promises fantasy wealth and status. At the same time the jungle setting removes social inhibitions. Jane’s sexual desire for Tarzan is undeniable. When she is abducted by Terkoz, an ape who intends to take Jane for his woman (the book even anticipates King Kong!) Jane is stirred by the sexual contest for her:

Jane – her lithe, young form flattened against the trunk of a great tree, her hands pressed tight against her rising and falling bosom, and her eyes wide with mingled horror, fascination, fear, and admiration – watched the primordial ape battle the primeval man for possession of a woman – for her.

Jane is stripped of social pretence and civilised decorum: it was a primeval woman who sprang forward with outstretched arms toward the primeval man… It is this headlong abandon that will disturb Jane later, but in the jungle, and for a much longer time after that, she cannot abandon thoughts of Tarzan, even when appropriate suitors or duty demand she does. For Jane, the jungle is a zone of sexual desire is amplified, whereas the city demands obedience and subservience to the strictures of marriage. This provides an interesting counterpoint to Tarzan whose natural instincts are directed by heredity, while Jane’s are consumed by emotion and desire. To this extent, Burroughs’s portrayal of Jane remains stereotyped.

Burroughs’s novel managed to entertain and fascinate me as much as those movies did all those years ago when I assume, I was more impressionable. The ending was kind of silly but also brilliant (there are some wonderfully silly and very funny moments in the book I haven’t touched upon) and served to demonstrate that the nobility Tarzan discovers within himself is no mere pretence (even if as a modern audience we might judge it to be false ideological). He is brave and selfless and perfect; qualities that lead him to a sacrifice which sets up the circumstances for a sequel, without ever feeling like it is contrived. You should swing into a bookshop and make off with a copy while practising your Tarzan call. This is bodice-ripping good stuff. 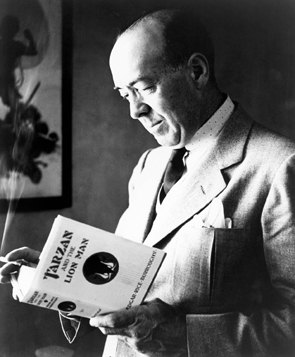 Edgar Rice Burroughs
Burroughs wrote a series of novels set on Mars, but his publisher break came with Tarzan of the Apes. Prior to that he had had an unsatisfying career in a variety of professions ranging from cowboy, shopkeeper, policeman, goldminer and accountant. He would eventually pen 24 Tarzan novels, some co-authored and published after his death in 1950. 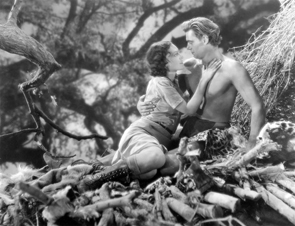 Tarzan the Ape Man, 1932
Olympian Johnny Weissmuller starred in over a dozen Tarzan movies. While they were very popular, he was not the first movie Tarzan, but he came to be associated with the role and the famous Tarzan call. He had onscreen chemistry with Maureen O’Sullivan as Jane, and the movies played to their strength by emphasising their romance, but gave them a surrogate child, Cheetah, the chimpanzee, and even a son in Tarzan Finds a Son!, 1939, when a boy is found from a crashed plane. 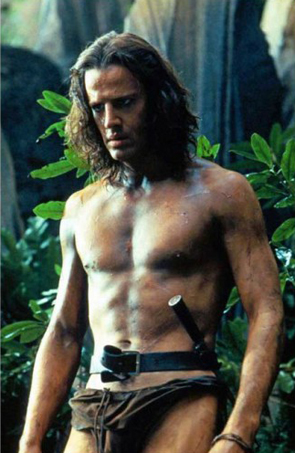 Greystoke: The Legend of Tarzan, Lord of the Apes, 1984
Hugh Hudson’s Tarzan, starring Christopher Lambert, focussed more upon Tarzan’s heritage and the competing loyalties and responsibilities to his English family and the group of apes he has led in Africa. The movie implicitly asks the question, what defines a family?