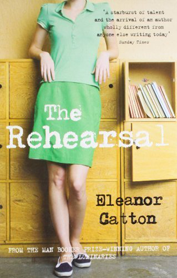 I was in the bookshop looking for something to read on the train home. It was the author’s name that first caught my eye with this book – I’d loved Eleanor Catton’s The Luminaries a few years back and picked this one up to see what else she’d written. I read the first few pages where the saxophone teacher talks to the mother of a prospective student and I was hooked.

If I am to teach your daughter, you darling hopeless and inadequate mother, she must be moody and bewildered and awkward and dissatisfied and wrong. When she realises that her body is a secret, a dark and yawning secret of which she becomes more and more ashamed, come back to me.

There are two separate storylines in this book. The first is mostly focussed on three teenage girls who attend the same school as Victoria. The first (Julia) is in the same year as Victoria, the second (Bridget) is in jazz band with Victoria and the third (Isolde) is Victoria’s younger sister. All three take private lessons with the saxophone teacher. Much of this part of the book is their talking to the saxophone teacher, telling her about what is happening in their lives, and telling her about the counselling sessions they are required to attend at school in an attempt to control the ‘infection’ that has been introduced in to the school.

The second storyline focusses on Stanley, a teenaged boy who has just left school and has been accepted into a prestigious local drama college. The first year drama students are required to create an original show to perform near the end of year. They decide to appropriate the local sex scandal they’ve read about in the paper as the basis for their show. None of them personally know anything about the story, it isn’t something which has had any actual impact on any of them, but they think the subject matter is salacious enough for them to create a good show.

The stories start as separate, but gradually come together when Stanley and Isolde meet and start dating, without Isolde ever telling Stanley anything about her family, and without Stanley ever telling Isolde about the play he will be performing in, the play which Isolde, without telling Stanley, buys tickets for herself and her parents to attend the opening night.

This is a beautifully written book which takes a seemingly simple story and presents it in a complex way. As you read more of the book, it starts to become unclear if there are really separate stories or if the first story is only scenes from second story, played or imagined by the characters in the second story. Many of the scenes sound like a performance, for example, many of the girls’ conversations with the saxophone teacher have the lighting and the staging discussed.

The lights come up just a little, just enough to include the saxophone teacher and bring her into the scene

The saxophone teacher at one point considers the casting and wonders what it would be like if she switched around the girls playing the parts of Bridget, Isolde and Julia. It’s never clear if the stories the girls tell are really what happened, or if they know they have to perform for the saxophone teacher, and start to play the parts they think she wants them to play. Or even if the scenes are completely from the imagination of the drama students as they prepare for their play. The ending of the book does nothing to clarify this, and I was left wondering if the whole story was actually a performance. I think this is a book I will go back to and reread, to see if I can sort out in my own mind how many levels of performances there are in the book.

Overall a really, really good book which I would happily recommend.

Mrs Bly, she says, remember that these years of your daughter’s life are only the rehearsal for everything that comes after. Remember that it’s in her best interests for everything to go wrong. It’s in her best interests to slip up now, while she’s still safe in the Green Room with the shrouded furniture and the rows of faceless polystyrene heads and the scratched and dusty mirrors and the old papers scudding across the floor. Don’t wait until she’s out in the savage white light of the floods, where everyone can see. Let her practise everything in a safe environment, with a helmet and kneepads and packed lunches, and you at the end of the hall with the door cracked open a dark half-inch in case anyone cries out in the long hours of the night.