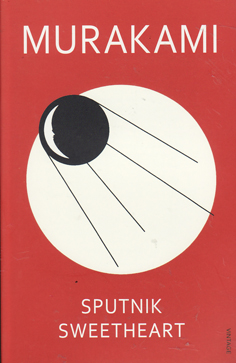 Murakami’s novel seems simple enough, but like other Murakami novels I’ve read, there’s eventually a sense of unease, confusion, mystery or enigma that permeates the story. Sumire is a young Japanese woman who nurses ambitions of becoming a novelist. Her output is prolific but so far, she hasn’t managed to write anything of worth. She is friends with K, the narrator of the story, but despite K’s desire for Sumire, their relationship has never progressed beyond friendship. Instead, K is a teacher and has become romantically involved with the mother of one of his pupils. Sumire, to put it bluntly, lacks life experiences. She has never had a sexual partner, nor any desire for one until she meets Miu, another woman, at a wedding, and she begins to have intense desires for her. This is the basis of Murakami’s story.

I’ve only read a few Murakami novels, including 1Q84 and The Wind-Up Bird Chronicle, but I felt a sense of familiarity as I read this one. While wells are not prominent in this novel as they are in The Wind-Up Bird Chronicle, they are nevertheless mentioned several times as a possible explanation for Sumire’s disappearance during a trip with Miu in Greece. I was also reminded of the double moon in 1Q84 which represents the alternative reality of the year 1984 that Aomame stumbles into. The moon is mentioned often in this novel and ultimately represents a connection to the reality of our own world once again.

Typically, Murakami’s tale of the disappearance of Sumire is the basis of an exploration of reality and identity, and is a distinctly literary exploration. At the beginning of the story Sumire asks K to explain the difference between sign and symbol, for which he gives an explanation that more suits the needs of the narrative than any explanation I could muddle through. A sign, he explains, is equivalent to its signified:

Say, for instance, you write ‘The emperor is a sign of Japan.’ That makes the two equivalent. So when we say ‘Japan’, it could also mean ‘the emperor’, and when we speak of the ‘emperor’, it would also mean Japan. In other words, the two are interchangeable… (31)

This is different to symbol, K tells Sumire, because, The emperor is a symbol of Japan, but Japan is not the symbol of the emperor. Sumire sums up by saying, It’s the difference between a one-way street and a two-way street.

The strangeness of Murakami’s writing tends to make this kind of exchange significant. Sumire disappears and K becomes convinced she has entered into another world or reality. What does this movement symbolise? Why do Murakami’s stories, at least those I’ve read, seem pre-occupied with this sense of an alternative reality?

And Murakami’s story is littered with metaphor and symbol. Take, for example, the discussion of Chinese gates, which seem like a link between one reality and another; a connection to our own present and the past. Yet they are also a metaphor for Sumire’s writing, since the gates would only magically revive the souls of the dead by slitting a dog’s throat to spray the blood upon them in a ritualistic baptism. Without this baptism, or in Sumire’s case, life experience, Sumire’s writing risks becoming like an unbaptised bone gate. A real story, K informs her, requires a kind of magical baptism to link the world on this side with the world on the other side. (17)

Murakami sets up the story of Sumire’s attraction to Miu and her disappearance, but I feel that plot itself is not what Murakami is interested in. His story embraces this magical baptism by allowing story elements to become a symbol for another reality, which is in turn represents inner realities which Murakami wants to explore. Most prominently, Murakami seems interested in the paradox of a present continuous self, as well as an individual’s relationship with external reality. This is first signalled in the story Sumire retells of Miu on the Ferris Wheel, and her experience that she split in two, leaving a version of her behind in our own reality without a sense of desire or potency. This disruption to self-identity is felt by K who does not pass through any mystical gate, but nevertheless senses self-disruption through temporal change:

… something inside has burned up and vanished. Blood has been shed, and something inside me is gone. Face turned down, without a word, that something makes its exit. The door opens; the door shuts. The light goes out/ This is the last day for the person I am right now. The very last twilight. When dawn comes, the person I am won’t be here anymore. Someone else will occupy this body. (195-196)

What I feel when I read Murakami is that his characters have a disconnect between themselves and others and the world, while the symbols and stories that represent them take on a dynamic life. Take, for instance, the Sputnik satellite of the title. When Sumire first meets Miu she tells her she admires Jack Kerouak’s writing. Miu mistakenly mislabels him as a ‘sputnik’ trying to recall the term ‘beatnik’ for this writer that represents a connection with the world and experience that Sumire lacks. As a result, Sumire thinks of Miu as her Sputnik sweetheart. Later, Miu tells Sumire she has discovered that ‘sputnik’ in Russian means Travelling Companion, which reflects the state of their relationship at the time. Finally, ‘sputnik’ (and satellites in general) symbolise the alienation and loneliness of human existence, as K reflects they are:

Lonely metal souls in the unimpeded darkness of space, they meet, pass each other, and part, never to meet again. No words passing them. No promises to keep. (196)

Finally, is there a better expression of the individual’s alienation and separation from the world than the story related in the epigraph and later told in the story of the doomed dog, Laika, sent up in Sputnik II?

Murakami’s narrative is multi-layered, and I could spend a lot more time in this review enumerating them. However, Murakami’s writing is best experienced, both for his fascinating ability to draw the reader into the story, and then to disorientate. Murakami is a philosophical writer who, for me, says something about the alienation of the individual in modernity and a search for an inner spirituality or self-understanding that has nothing to do with mainstream religion. There is an existential quality to them, and yes, even an absurdist turn, too. I intend to keep reading Murakami over time, and I suspect a reading of his oeuvre will reveal a continuing interest in some of the ideas raised in the books I have read so far.