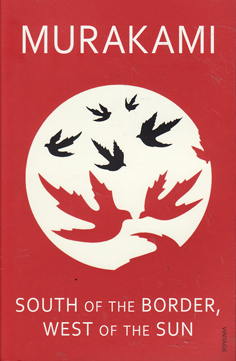 South Of The Border, West Of The Sun
Haruki Murakami

The title, South of the Border, West of the Sun, refers to a song by Nat King Cole which he apparently never sang. I went looking for a version of it after I finished reading the novel and only found a version sung by a fan in the style of Cole. Nevertheless, the song exists in the novel and is listened to by Hajime and Shimamoto, first when they are friends at school, and next when they meet each other 25 years later.

The novel appears to be a simple enough love story. It details Hajime’s early years as he grows into adulthood, including his first early relationship with Shimamota as a 12-year-old and his first sexual experiences with Izumi. Flash forward, and we next find Hajime as a 30-year-old man, married to Yukiko with two daughters. With a loan from his father-in-law, Hajime has become the proprietor of two successful jazz bars and his life seems perfect. Except that Shimamoto returns one day.

My copy quotes The Times, whose reviewer suggests that the novel is Casablanca remade Japanese style. Not really. Casablanca is referenced in the novel. Hajime asks his pianist to stop playing a song, ‘Star-Crossed Lovers’ and his pianist remarks, Sounds a little like Casablanca to me! After that, he begins to play ‘As Time Goes By’. There’s also Hajime’s bar, like Rick’s, and Shimamoto walks back into Hajime’s life there. So, there’s a love triangle, but there’s also Izumi, now a woman strangely broken after her brief relationship with Hajime, to play on Hajime’s conscience. It’s Casablanca, of sorts, but as always with Murakami, you get the feeling there is more happening here than a love affair.

The story begins by explaining Hajime’s strange obsession. He is an only child and this makes him feel separate to his peers. The period is post-war Japan when Japanese couples were being encouraged to have more children. Hajime knows no other only-children until he meets Shimamoto, and they form an innocent relationship, becoming friends and listening to records after school. When Shimamoto re-enters Hajime’s life 25 years later she remains a mystery; he doesn’t know what she has been doing, her personal circumstances, or even how she maintains her expensive tastes, as she admits she has never worked a day in her life. Hajime sees the world of work as a link to others’ humanity and his own. Shimamoto, however, seems strangely detached from the reality of everyday life, apart from a personal tragedy, the loss of her baby.

The sense of the past is essential to this book. It haunts all the major characters, particularly Hajime, since the novel is narrated from his perspective. Central to this is the impossibility of regaining what is lost in the past. Even with Shimamoto returned there are too many things that have happened in between, and their lives have been set. There is no going back. But it is Hajime’s belief, perhaps more of a desire, that this intervening past can be denied in order to grasp that chance again, that drives the story.

Hajime’s father-in-law, who speculates on the post-war building boom in Japan and tries to draw Hajime into his interests, seems to represent a new, voracious and some-what morally vacuous Japan. Shimamoto, on the other hand, remains steadfastly in the past, blasted by tragedy much like Izumi. The philosophy of the new world seems to be summed up by an old friend of Hajime’s who denies moral culpability for others in a somewhat social Darwinist creed:

Another person’s life is that person’s life. You can’t take responsibility. It’s as if we’re living in a desert … Rain falls and the flowers bloom. No rain, they wither up. Bugs are eaten by lizards, lizards are eaten by birds. But in the end every one of them dies. They die and dry up. One generation dies, and the next one takes over. That’s how it goes. Lots of different ways to live. And lots of different ways to die. But in the end that doesn’t make a bit of difference. All that remains is a desert. (70-71)

For Hajime, this thought is more troubling than comforting. He reflects that Everyone just keeps disappearing … And all that remains is a desert. He is not comforted by the moral neutrality of the desert, but rather, is haunted by the devastation of life and the past that the desert suggests. And instead of the booming Japan envisaged by his father-in-law, he sees the shadow of decay and disintegration lurkin[ing] everywhere … Like a shadow burned into a wall. (71)

It’s this last image that is most startling. The famous ‘shadows’ of people caught unawares, formed by the atomic explosion in Hiroshima, is a new type of devastation refashioned as a metaphor for memory, life and its impermanence in the novel. The spectre of Shimamoto in Hajime’s life is also the spectre of the bomb across Japanese culture. Like the shadows of Hiroshima, individual lives are fragile and transient. Things that have form will all disappear, Shimamoto tells Hajime, But certain feelings stay with us forever. All life is conditional, she seems to say, like her constant use of the words probably and for a while that so frustrates Hajime’s desire for certainty. Yet Hajime already understands this conditionality. When Hajime reflects upon his wife and their marriage he remembers Shimamoto’s words:

If things had taken even the slightest of wrong turns, I wouldn’t be holding her body like this. Gently warm and soft. Beneath my palm I could feel her life. No one could say how long that life would last. Whatever has form can disappear in an instant. (121)

When he meets Shimamoto again he is drawn to the same thinking:

You’re here … At least you look as if you’re here. But maybe you aren’t. Maybe it’s just your shadow. The real you may be somewhere else. Or maybe you already disappeared, a long, long time ago. (150)

The novel, I find, is deceptively simple. It is natural to compare it to something like Casablanca. But as much as I love that movie, I find this novel far more subtle, suggestive and complex. Casablanca’s characters are, ultimately, uncomplicated, despite the seeming complications of emotions suggested by the love triangle. Victor Laszlo is staunch and patriotic, Rick is, at heart, a hero and Illsa was in love with two men, but it is hardly her fault. Hajime, on the other hand, is morally grey. He knowingly deceives his wife and is open to all manner of temptations. Yet he is also a moral voice within the novel and the character with whom we empathise in his struggle to define himself. And while Shimamoto is the focus of Hajime’s romantic desires, she is also a cipher, a shadow of Japan’s idealism and its self-destructive past, an echo of a life that might have been, and a danger to a life Hajime might yet live.

And the Nat King Cole song that never was? Its use by Murakami is like one of those turns in life that might have been: one of those instances where it might have existed but then never was; like a love left behind that can only be dreamed of, now, in the present; like something that might have had form but is now only a feeling. The song in the novel is a metaphor for all of this. But when Hajime and Shimamoto contrive a meaning from the song, south of the border is somewhere ideal, somewhere beautiful, but west of the sun is a madness, unobtainable and ultimately self-destructive. There is a choice being presented in this interpretation. Probably is a word you may find south of the border, Hajime reflects, But never, ever, west of the sun. In each choice is the possibility of life or destruction.

This is a beautifully written book, subtle and suggestive of so many things. Each character and aspect of the book reflects another, and encourages contemplation beyond anything a review this length could suggest. Highly recommended. 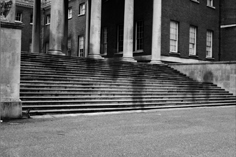 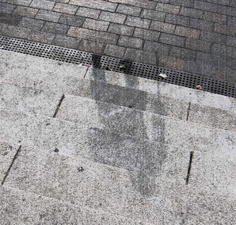