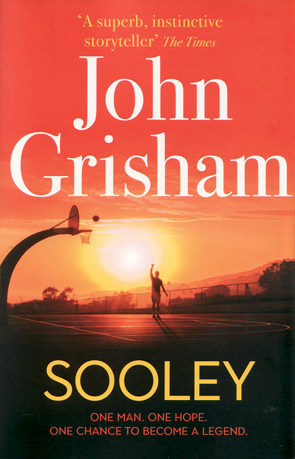 Sooley is the latest publication by John Grisham. The story relates to Samuel Sooleyman, a young man from Sudan whose love is basketball. He spends every spare moment of his days shooting hoops on the dirt court in his village. At seventeen years of age, he, like many others in his country, look up to famous players and dream of being the best; playing professional basketball, becoming famous and making his family proud.

As a tall young man, still growing and fast on his feet, he is spotted by a oach, who sees potential in him. He is selected to go to the USA and start college, even being given a scholarship and a part time job to help him through the process. He is still torn between leaving his family or moving, and ultimately having an opportunity to help his family relocate from his war-torn country to the USA, land of promise. He makes the decision to go, but soon realises that he is far from the best and spends many games on the bench watching his team play.

Meanwhile, back in Sudan, guerrillas have reached the village and his family is to be torn apart in grief by an ambush. The life of refugees is highlighted, and it is indeed a sad and devastating life of chaos, starvation and poverty, devoid of the basic needs in life. While the family try to find each other amongst the carnage and make a life with what little is left, news eventually reaches ‘Sooley’, and he feels more compelled to try and help his family. He works night and day to try and improve his basketball, practising shooting hoops whenever he has the opportunity.

His coach eventually gives him a Guernsey to play and he shows a vast improvement in a short time, helping the team to a winning streak. As he goes from strength to strength, he starts to become a favourite with the team and the fans, and ultimately gets offered the Holy Grail that he seeks. How he deals with his rise to fame, making Sooley a legend back in Uganda where his family resettled, is part of the story. But will it deliver what he and his family expect?

When I first started reading this book, being a fan of John Grisham and having read every one of his books, I kept thinking the book was dealing with humanitarian themes, and I certainly enjoyed this new direction. Yet, I also kept waiting for the legal aspect of the book to kick in, but it didn’t. I am not, by any means, a sports fanatic. In fact, in terms of basketball, the nearest I have come was enjoying the game at the recent Olympics and Paralympics televised from Tokyo. However, while I enjoyed the human aspects of the story, I started to find the actual retelling of the basketball games, using the jargon of the sport, some of which I had to look up, a little repetitive and boring. I kept thinking that basketball fan might enjoy this more, but I suspected that may not even be the case.

I know that Grisham is a sports fan and this is just one of his books where he swapped the law court scene for a basketball court. I should have realised that by the book cover. I generally love his legal dramas, but I can’t say that this book was one of my favourites. It ranks with a few of his other sports books, like Bleachers and Playing for Pizza, both based on football.

I personally think that if, like some Harlan Coben novels, Grisham wove the sport in with a legal aspect, perhaps I would have enjoyed it more. Perhaps that is just my bias. But most of this book I found really difficult to get through, except the beginning and the end. I hope others don’t feel the same way.