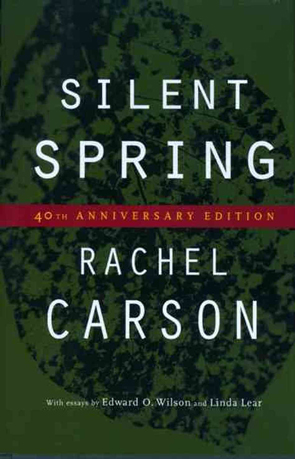 I've been waking up most days with the best of intentions; my to-do list with all sorts of productive activities on it, my current book sitting on the ottoman, my daily update from blogs and journals and magazines and etc. downloaded onto my Kindle, a recipe for a new batch of chili to cook up. Usually by 8:00 or 9:00AM, however, I'm slumped down in my seat, my phone five inches from my face, sorting through all sorts of apocalyptic headlines and commentary about Coronavirus. It's addicting. It's toxic. New confirmed case counts, new death counts, my county has more cases than most states do. My country has the most in the world. This downward spiral of anxiety, grief, and voyeurism gnaws away at me, leaving me as little more than a hump of base urges and desires, mostly wanting to eat some junk food and to watch The Office and allow my brain to just turn off. The familiar pattern of exhaustive overwhelm and then immediate shutdown.

In times like these it's good to remember that things can change for the better.

Sixty years ago Rachel Carson, literally dying from breast cancer, completed her magnum opus: Silent Spring. In an age where we believed that nature could be conquered through Science, man became destructive against his own planet. Pesticides, insecticides, herbicides, these great cocktails of poison created in labs and then mass-produced in factories became the easiest way to control nature. Tired of roadside wildflowers making the highway look unkempt? Just spray them indiscriminately with 2,4-D and pretend like you don't see the chemicals drifting into the adjacent forest. Also pretend like wandering cattle haven't eaten foliage sprayed with 2,4-D and then died.

Or maybe you want to get rid of the invasive Japanese Beetle that has sneaked its way through to Michigan. Great! Let's just blanket the land with Aldrin, one of the deadliest poisons in production and tell people there’s no possible harm that could come to them. Ignore the dead birds that have recently appeared after spraying. Those must be from something else. Please clean your lawn of them; don't worry they probably aren't still toxic in any way.

It seems like a no-brainer today that synthetic pesticides are dangerous, but we only have that opinion because of Rachel Carson and this book. A marine biologist herself, Carson knew that the majority of scientific research was not reaching the general public in any meaningful way. It's much easier to believe a corporate spokesperson saying, We tested it, it's fine! Nothing to worry about, than to collect and read a dozen study papers that you won't even comprehend.

This is why Silent Spring was so important. Carson explains scientific terms for a general audience, she breaks down the issues at hand, piece by piece, allowing knowledge of one issue to inform and reinforce another. She explains the makeup and lethality of then-current pesticides, how and why they’re dangerous to humans and cites with dozens, if not hundreds of examples of their actual use. She explains invasive species entering different geographic areas and what kind of havoc they cause. Then she details how different government organizations decided to deal with these invasive plants and animals, usually with a priority for cost-saving and ease. Stitched together with her subtle but passionate prose, Carson creates a handbook for the average person to read and say, Wait, really? We're just dumping poison onto our land and it's not even actually killing the thing we want it to? Carson did not use footnotes throughout the text, but knowing that her work would come under significant scrutiny she included a works cited section in the back of the book and lists nearly 600 direct citations to all the claims she makes. 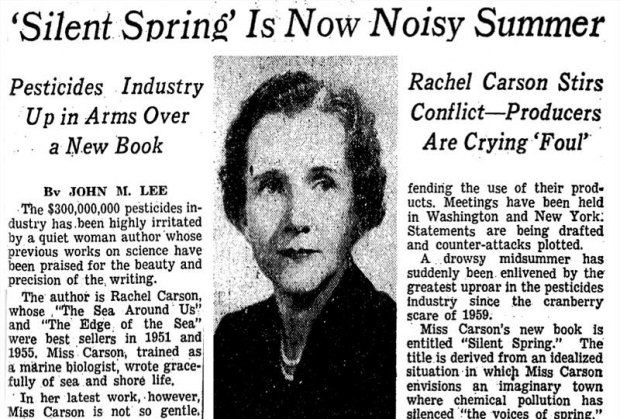 Silent Spring was serialized in The New Yorker originally, but a traditional book was published soon after. The book was selected to be in the Book of the Month Club that same year, which cemented its presence in the public’s mind. William O. Douglas, associate justice of the Supreme Court and himself an environmentalist, wrote an endorsement for the book. Some chemical companies tried to mount a fight against the book, namely DuPont. Due to the well-vetted nature of the book, there was little to attack. Lobbyists for the chemical industry attacked Carson personally, calling her a cultist and a communist. They falsely claimed that she wanted a complete and total ban of pesticides and would allow Earth to be overrun with weeds and plagues of insects. They said there was nothing wrong with their product, and that this woman must be mistaken.

Carson won the battle. The scientific community backed her claims, the industry dropped their attack strategy and government reviews on the use and dangers of pesticides were being created in the wake of Silent Spring. Carson would die in April of 1964, but her legacy lived on. Her work had inspired a new generation of environmentalists and the public had a changing of opinion of the necessary evils needed in order to control weeds and insects. Following years of increased environmental awareness, the Environmental Protection Agency (EPA) was established in 1970. Remedying an issue that Carson addressed in Silent Spring, the EPA would now take over the regulation of the pesticide industry. This was previously done by the Department of Agriculture, in what many considered to be a conflict of interest.

Unfortunately, things have changed for the worse since then. The dismantling of the EPA and other environmental safeguards that were established has been a slow but consistent plod by special interest groups who seek to profit from varying destructive ventures. And it seems in the name of the current pandemic, the EPA will be gutted even further, more teeth removed, more money to be made by industries that profit solely from harming our planet. It's hard not to become cynical about it all. Perhaps we all could use a refresher from Silent Spring, if only we could stop reading the damn news. 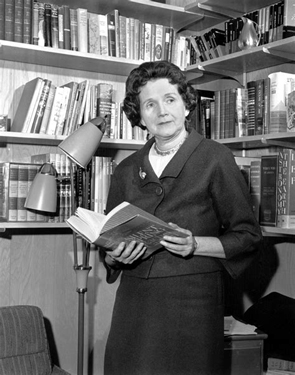 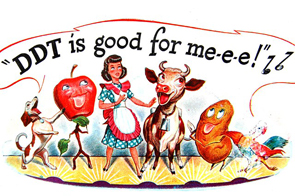 This image is from an advertisement, typical of the marketing of DDT from the end of World War II right through to the 1960s. DDT was marketed as a benign and useful chemical to be used in agriculture as well as in the home.