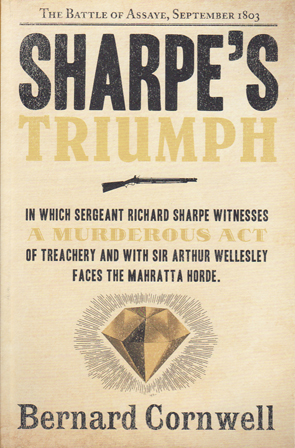 Richard Sharpe and the Battle of Assaye, September 1803

Sharpe’s Triumph is set about four years after the siege of Seringapatam which is the subject of Sharpe’s Tiger, in which the Tippoo of Mysore is killed, at least in Bernard Cornwell’s retelling of the history, by Richard Sharpe, his eponymous hero. History has never revealed the true identity of the soldier who actually killed the Tippoo and Cornwell provides a creditable reason for this: the Tippoo was bedecked with all manner of diamonds and rubies at his death, and the man responsible would have become very rich, indeed, if only he kept quiet about it. Cornwell is therefore free to take license with history and provide that honour to Sharpe, so that by the beginning of Sharpe’s Triumph, Sharpe has been living out the last four years as an ordinary sergeant in Wellesley’s army, all the while keeping his riches secret.

Chronologically, Sharpe’s Triumph is the second book in the Sharpe series, although it was actually published fifteenth. I mention this because by the time Cornwell came to write about Sharpe’s early career he had already mapped out his character’s arc in those earlier works. Without having read them yet, I can already guess that Sharpe becomes valuable to Wellesley, so that by the time Wellesley is known by the title and battle for which history best remembers him, the Duke of Wellington and the Battle of Waterloo, Sharpe is sure to have a decisive role to play.

Which brings me to the question of how this book serves that character arc. In Sharpe’s Tiger we were introduced to Richard Sharpe’s nemesis, Sergeant Obadiah Hakeswill, a malignant, vengeful, sadistic and murderous man, it gave Sharpe opportunity to earn enough recognition to get him promoted to sergeant and explained how he came about his riches. Hakeswill, plays a more minor role in this novel. The threat he poses, a falsified account against Sharpe that could have him court martialled or executed, if only Hakeswill could capture him, is real enough. But Hakeswill doesn’t feature as prominently this time and doesn’t really drive the plot. That role is given, to some degree, to Lieutenant William Dodd, to begin with. Dodd is loosely based upon an historical Dodd who deserted to the Mahratta army to escape a murder conviction. However, Cornwell’s Dodd is partly fictitious, since he is responsible for a fictitious massacre at Chasalgaon at the beginning of the novel, which provides an opportunity for Sharpe. He is recruited to hunt Dodd instead of being left to his usual duties when Assaye happens, since he is the only survivor of the massacre and therefore the only witness. This is the catalyst for Sharpe’s story in this second novel, and it allows him to be reunited with the pious Colonel McCandless who is responsible for teaching Sharpe to read in the first book.

But neither Dodd nor Hakeswill are central to the narrative. While Cornwell may concentrate the bulk of his words to battles and great deeds, and to some extent the book becomes a quest to find Dodd and capture him, Sharpe develops a more existential need: Sharpe’s desire for repudiation against life’s fate and the treatment he received when he was an orphan:

… he lay and stared up at the stars through the mist of smoke. A million stars. He had always thought there was an answer to all life’s mysteries in the stars, yet whenever he starred at them the answer slipped out of his grasp. He had been whipped in the foundling home for staring at a clear night’s sky through the workshop skylight. ‘You ain’t here to gawp at the dark, boy,’ the overseer had snapped, ‘you’re here to labour,’ and the whip had slashed down across his shoulders and he had dutifully looked down at the great tarry lump of hemp rope that had to be picked apart.

Regardless of his masculine swagger and his inclination towards action over thought, Sharpe is given humanity and an unexpected Romantic nature in Cornwell’s portrait of him. I think this insight is most important to appreciate what Cornwell is trying to achieve for the development of character in this book. Sharpe is not a mindless soldier or merely an acquisitive thief, he has dreams beyond what any man in his social position should have:

Christ, he thought, but would it not be a joy to walk back into the foundling home with braid on his coat, gold on his shoulders and a sword at his side? That was the respect he wanted, from the bastards in Brewhouse Lane who said he wouldn’t amount to anything and who had whipped him bloody because he was a bastard off the streets.

Sharpe wants nothing less than to be promoted as an officer, but promotion from the ranks is almost unheard of. He has the wealth to buy an officer’s commission, but without family connections or an explanation as to the provenance of his wealth, this will do him little good.

Sharpe’s new desire turns this story into a moral journey as much as it is a story of great action. Colonel Pohlmann, a former British officer who now commands Scindia’s force, tempts Sharpe with easy promotion and riches in the Mahratta army. Colonel McCandless, a devout Christian and Sharpe’s mentor since Seringapatam, who accompanies Sharpe on a journey to Pohlmann’s camp to safely deliver Simone Joubert, a wife of a French soldier serving the Mahrattas, is a moral counterbalance for Sharpe. McCandless preaches discipline and the Bible and is convinced that Women upset matters. And as for India, it is a place or moral perdition where, The further south you travel, the more sin is provoked among womankind. It makes sense, of course. Hell is a hot place, and hell is sin’s destination.

It is easy to read more into this than Cornwell may have intended. The Battle of Assaye, which fills over a third of the novel, is a place of hell, a battle Wellesley is said to have nominated as his most difficult victory, without hesitation. And it is in this battle that Sharpe’s ambitions and loyalties will be tested, where his faith in command may be shaken, and reward may be given or withheld. Sharpe has enough scepticism about his superiors to wonder whether loyalty is worth it.

As for the Battle of Assaye, itself, one gets a fairly broad understanding about what was at stake and the course of the battle. I looked up the area on Google Earth, but this time it was harder to locate the battle field than it was for Sharpe’s Tiger. I found that this was mainly due to the drawing of the map at the beginning of the novel. Cornwell, who visits the locations he writes about, claims the area has changed little since the battle. It certainly couldn’t have changed as much as was evident from satellite photos when compared with the map. The situation of the rivers, for one, seem to be different by a magnitude of kilometres when compared to Cornwell’s map; the whole scale seems wrong. Yet while the map isn’t as accurate as the map in the first novel, it still serves its purpose well to clearly outline the course of the battle as narrated in the story.

The battle is described with vivid intensity. It was fought south of Assaye between the Juah and Kaitna rivers in India and was an unbelievable victory for the English. Wellesley’s army was separated from Colonel Stevenson’s, who was meant to join with Wellesley before the battle. They had remained separated due to the logistics of getting a full army down a single road and Pohlmann’s unexpected march towards their position. Wellesley had only about 7500 infantry and cavalry and only a few small guns, while Colonel Pohlmann’s commanded two armies belonging to Scindia and the Rajah of Berar, of nearly one hundred thousand men as well as around forty cannons, some of them large pounders. Wellesley, faced with the prospect of crossing the river in front of Pohlmann’s guns, gambled that there would be a ford further east joining two villages, and no one knew if he was right until Wellesley himself actually plunged into the river with his horse.

Overall, I thought this book was just as well written as the first, although I think the focus of the drama was not as clear as Sharpe’s Tiger. Cornwell clearly wanted to keep his villain, Hakeswill, in play, but didn’t have a lot for him to do, and Dodd seemed like a distraction from the real arc of Sharpe’s character, which was to test his loyalty, his morality and his mettle. This book establishes those qualities for the reader, but there is also a lot of action and heroics to distract from that, too. At the same time, the book also gives some insight into this horrific battle and the taking of Ahmednuggar before that, as well as the incredible bravery required by the tactics and weapons during this period of history. Cornwell glorifies this, to an extent, but the true costs of blind loyalty and ventured bravery are also drawn in sharp relief. Well worth a read.

An Interview with Bernard Cornwell
Widget is loading comments... 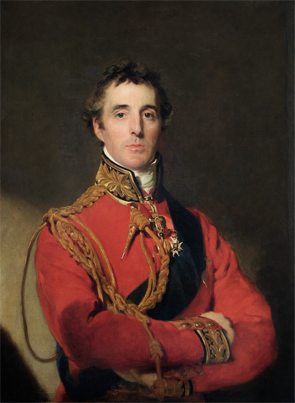