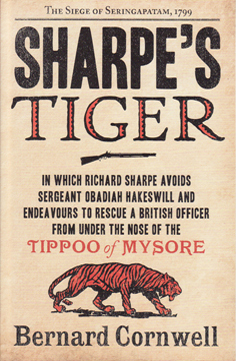 This series was recommended to me because I have previously read George MacDonald Fraser’s Flashman Series and Patrick Obrian’s Aubrey/Maturin series. Both are historical dramas set in the nineteenth century. Obrian’s novels overlap the period with which the Sharpe series is concerned. The film Master and Commander starring Russell Crowe was based on the series. The Flashman series, on the other hand, covers many key historical moments over a long time period during the 1800s. Obrian is a refined writer with highly accomplished literary skills and an encyclopaedic knowledge of the British navy and the Napoleonic era. Fraser’s books are more of a very high-brow spoof, with their eponymous hero falling from one key moment in history to another, a total coward whose actions always see him being mistaken for a great hero, when all he wants to do is bed women.

Cornwell’s book falls somewhere in between these. There are comic moments, and scenes of great action, all informed with a very detailed understanding of the period and his specific subject. But apart from being a well-researched historical novel, this is simply good storytelling.

If you were interested in reading this series, Sharpe’s Tiger is either the first or the fourteenth book, depending on whether you wish to read them in chronological or publication order. Each of the novels is set around key historical events. Originally, Cornwell envisaged the series culminating in the defeat of Napoleon at Waterloo. The books were intended to trace the career of their fictitious hero, Robert Sharpe, along with his relationship with Arthur Wellesley, better known for his later title, the Duke of Wellington, who defeated Napoleon at Waterloo. Cornwell later returned to Sharpe’s early career with this book. Cornwell chose to set Sharpe’s beginning as a private in the British army in India because Wellington’s early career was distinguished at the siege of Seringapatum.

The key action takes place at Mysore, India, 1799, where the British intend to force the Muslim Tippoo from his fort at Seringapatum (now known as Shrirangapattana). The Tippoo preferred an alliance with France and Napoleon had considered entering India. Seringapatum, therefore, was an important victory for the English because it put an end to the Mysorean wars and entrenched the power of the English in India. Had England been defeated in this battle, the history of Europe may well have been quite different.

I think the test of an historical novel is whether it can make the past accessible to a modern reader. Cornwell does this exceedingly well. He writes in his notes at the end of the novel that he always visits the sites of battles he writes about. Fortunately, the fort of Seringapatum is still quite intact, and you can view its defences in a video I have posted at the end of this review. Cornwell has a strong understanding of his setting and is able to explain the key moments of the battle quite clearly, although he does create a fictitious climax. I have no problem with that. After all, this is historical fiction, not history, and as Cornwell notes fictional heroes must be given suitable employment.

But the novel is not just an account of the siege. Cornwell is capable with his characterisation, also, which is enlivened by a detailed understanding of camp conditions and the lives of soldiers. If Cornwell needed to create a suitable climax for his hero, he also creates a suitable antagonist in the person of Sargent Obadiah Hakeswill. Hakeswill is a malevolent bully, as well as a snivelling coward. He clashes with Sharpe early in the novel, setting him up to receive two thousand lashes, which he expects to kill Sharpe, all for his jealousy over a woman. Needless to say, Sharpe doesn’t die from his punishment, and in fact Cornwell adeptly uses this scene to lift his hero from obscurity with a surprising twist. Hakeswill is one of those characters who are loathsome, but entertainingly so, and it won’t be any surprise to say that Cornwell spares him for future novels. I know, because I’ve already read the blurb on two further novels I have bought in the series.

Cornwell’s novel also offers a perspective of British courage – I don’t mean a starry-eyed and uncritical acceptance of heroism – but a perspective into the psychology and motivations that made men risk their lives. He certainly doesn’t hide the fact that soldiers are often frightened, make mistakes or even act cowardly. Nor does he belittle the Tippoo, who he portrays as valiantly defending his city in person. But whether it be out of fear, for the sake of reputation, or paltry booty from the ransacked pockets of the enemy or for the promise of promotion, soldiers risked their lives. One of the interesting details from the novel is the Forlorn Hopes, so-called because they volunteer to lead attacks with little hope of survival. They’re the ones who will be surprised by gun emplacements, waiting soldiers or traps. Guaranteed of a promotion or glory and little else, men were willing to risk everything.

There are other fascinating details in the book. One that interested me was the Tippoo’s automaton, found after the British took the city. It was a life-size figure of a redcoat, supine, with a tiger attacking him. The British soldier moved and made fearful moaning noises while the tiger growled. It is a clear indication of the Tippoo’s hatred of the British. Added to this already bizarre object was the fact that it was also a musical instrument. Opened, it revealed a keyboard and pipes and it became an organ. It is now displayed in the Victoria and Albert Museum in London. There are a further two videos below about the tiger.

The siege is predominantly told from the point of view of the British, which may be considered problematic by some readers who feel uncomfortable with colonialism. Cornwell addresses this issue to some degree in his historical notes by pointing out that while the Tippoo has become something of a hero in India – as a proto-independence fight – he himself fought not for Indians but for Mysorean dominion over India. However that may be, Cornwell still manages to give a sympathetic portrayal of the Tippoo with his brave defence of the city, despite his somewhat more bloodthirsty predilections (he fed prisoners to tigers or had their necks twisted until broken by his jettis, powerful strongmen). He also gives a highly sympathetic portrayal of Colonel Gudin, a French soldier allied with the Tippoo who befriends Sharpe.

This was a well-written, well-paced and well-researched book. It was highly entertaining and easy to read, and it informed me about a period of history I know little about. For anyone who likes historical fiction of a more traditional kind, they couldn’t go past this book. And it has the added advantage that if you love it, there are a further twenty books in the series to enjoy. I know I will be reading a few more of them.

I suggest you skip to 3:45 minutes into this video to get to the must relevant section immediately 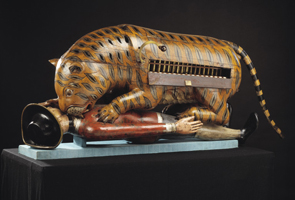 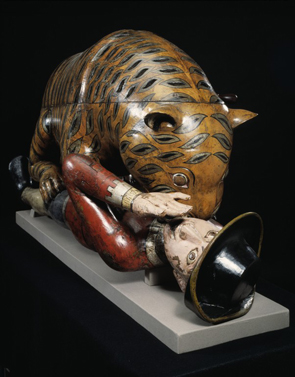 He walked past the throne to stare at his favourite tiger. This one was a lifesize model, made by a French craftsman, that showed a full-grown beast crouching above the carved figure of a British redcoat. There was a handle in the Tiger's flank and when it was turned the tiger's paw mauled at the recoat's face and reeds hidden within the tiger's body made a growling sound and a pathetic noise that imitated the cries of a man dying. A flap opened in the tiger's flank to reveal a keyboard on which an organ, concealed in the tiger's belly, could be played, but the Tippoo rarely bothered with the instrument, preferring to operate the separate bellows that made the tiger growl and the victim cry out. He turned the handle now, delighting in the thin, reedy sound of the dying man. In a few days' time, he thought, he would stun the very heavens with the genuine cried of dying redcoats.