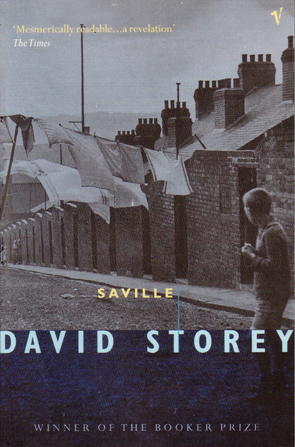 Saville has a familiar style that makes it an easily accessible book for those who like traditional novels in the vein of nineteenth century realism. The opening scene is like something straight out of Dickens: a coal haulier’s cart draws into one of the narrow streets of Saxton, bringing Harry Saville, his wife Ellen and their child Andrew to their new home, pulled by a large, dirt-grey horse. The scene could easily be set in the nineteenth century and the David Storey’s style is clearly meant to imitate the social novels of that period: Towards the end of the third decade of the present century… the novel begins, echoing many novels of the previous century which were written in the era in which the novel as an artistic form became dominant. For readers in Victoria’s England, the period of the present century could be assumed. I found Storey’s style appealing, unassuming and written in deference to the story, itself.

To draw the Dickensian comparison just a little further (one might make a case for Elizabeth Gaskell or Thomas Hardy just as easily), Storey writes of the poor in a similar fashion: of the depredations faced by the poor – Oliver Twist – and the attempts to rise above class – Great Expectations – or the opportunities of education – David Copperfield or Hard Times. These are also the themes of Storey’s narrative, representing the gruelling labour of the poor, their living conditions and social stratification which draws their plight into stark relief. But as a protagonist of a social realist novel, Colin Saville, Harry and Ellen’s second son, does not find education to be an opportunity, but disappointment, even an entrapment.

Saville is set in 1940s England in the mining town of Saxton. The title refers to the novel’s young protagonist, Colin Saville, who is growing up with his parents, Harry and Ellen, and later his younger brothers, Steven and Richard. Harry is a coal miner, forced to ride his bike to the colliery every morning, since he has no position in the nearby local colliery. Harry dreams that their second son (Andrew, their first, died just prior to Colin’s birth) will escape the coal pit through education. Without a proper formal education, himself, Harry attempts to tutor Colin to help him pass the entrance exam for the grammar school. When Colin passes the exam, his success is seen as a sign that the family’s prospects have improved.

Saville is also a novel dealing with age-old themes of fate and self-determination, although it is not overtly religious. Yet, having said that, the novel bears a subtle allegorical influence from Bunyan’s Pilgrim’s Progress. Stephens, a teaching colleague, in reaction to Colin’s inability to capitalise upon his potential, tells him: You’re Pilgrim bogged down at the gates of the city. Stephens’s language is peppered with allegorical tropes: I’ll be leaving soon, of course, myself. Casting myself off from this rotten town: embarking from these shores of oblivion. Unlike his namesake, however, Colin cannot caste off from the City of Destruction (Saxton) to the "Celestial City" (in this case London), as he is bound by a sense of familial responsibility. Having achieved a modicum of success he feels obliged to help his family, even though he is philosophically and intellectually estranged from them.

The allegorical element of the novel is not something overt, but is emergent as Colin progresses towards his family’s dream. Yet this is not a seventeenth century allegory, nor even the more familiar social novel of the previous century. Colin’s progress towards his goals is tempered by his associations along the way: Stafford, the son of privileged mill owners who can afford to buy him a place in the grammar school; Batty and Stringer, two working-class boys whose hideout at the sewerage pits is bluntly symbolic of their prospects; Margaret, who challenges Colin with her feminist credo; and Elizabeth, a married woman provides the prospect of Colin overturning his family’s assumptions and values.

But central to the question of self-determination and fate lies the issue of class and education. In a simplistic dichotomy, fate might be attributed to the former while free will – the ability to rise above one’s class through self-improvement – might be attributed to the latter. Yet Storey seems to contextualise Colin’s education not just in relation to his class, but nineteenth century beliefs in utilitarianism. Mr Platt, a teacher whose mockery of Colin’s poetic pretentions reminds us of Thomas Gradgrind from Hard Times:

You are not to have, in any object of use or ornament, what would be a contradiction in fact. You don’t walk upon flowers in fact: you cannot be allowed to walk upon flowers in carpets. You don’t find that foreign birds and butterflies come and perch upon your crockery; you cannot be permitted to paint foreign birds and butterflies upon your crockery.

Platt, upon reading a poem written by Colin about bees in an examination paper, similarly humiliates him in front of the class:

In the hands of men like Platt, education is not an enervating, uplifting power as Colin’s father might hope, but a spiritually crushing experience fomented by the exigencies of class and historical imperative. Neither Stephens or Stafford believe the working class has any vital role to play in the world of the future. Stephens states: The working class, I’m afraid, is a temporary phenomenon; and our job, unfortunately, is to distract and, if possible, entertain that temporary phenomenon until it, of its own accord, disappears. Stafford’s views are bleaker still, though something of a posture, since he knows the reality of his philosophy will never touch him personally. He tells Colin:

Everything’s easy for you … You’ve come from nowhere; they’ve put the carrot of education in front of you and you go at it like a maddened bull … Take away the carrot, and there really isn’t anything at all. It’s only someone like you, crawling out of the mud, that really believes in it.

Stafford’s slight at Colin’s class – his crawling out of the mud - is echoed in Bletchley’s belief in belief in Darwin and evolution, and by extension, Social Darwinism, which in turn recalls Stephens’s dismissal of the working class as an historical anomaly: when coal is acquired by wholly mechanical means or perhaps isn’t even needed at all, people like Batty and his brother, Stringer, won’t have a function. And when the function ceases so does the species, or those parts of it that can’t recognize or create further function. The novel is dotted with philosophical insights into twentieth century humanity, each with linguistic or thematic connections to each. Do you ascribe to it [life] a purpose, or are we ants, mechanistic functions, crawling on an arbitrarily eroded piece of rock? Gannen, another teacher, dismisses Stafford’s views: He is one of the modern school, the sceptics, who see humanity as merely the fortuitous outcome of biological determinism.

Instead, the struggle is played out through the opportunities education is deemed to offer, or the stultifying trap that it may otherwise be; between the entrapment of class and sex, and the existential struggle with nihilistic despair. There is a strange disjunction between the enervating progress of the nineteenth century protagonist from poverty or hopelessness – a Pip or an Oliver, say, to their eventual success – and Colin Saville’s journey which seems, instead, to undermine the expectations that the book’s traditional style encourages.

Saville is both an extremely traditional book in the vein of nineteenth century realist novels, as well as a modern work that expresses existential discontent and alienation. The story is told chronologically in third person and covers the period just before Colin’s birth to the period in which he has starts his teaching career and has been embroiled in a complicated affair with Elizabeth, a married woman estranged from her husband. Storey’s narrative is rich and detailed, with many engaging episodes that flesh out the characters and their period. One of my favourite episodes from the early section of the book involves Harry’s attempts to build a bomb shelter in their back yard. The neighbours watch his efforts, and when the first air raid is sounded they make their way uninvited to the shelter, only to discover it has been flooded. Of course, the real bombing is taking place in London, and eventually Harry and Colin watch the German planes fly overhead, unthreatened, with the bomb shelter now defunct. It’s one of many details that hint at Harry’s frustrations in life. His attempts to supply drawings to the war office that offer a series of inventions and strategies for defeating Hitler are naïve and immature, and not surprisingly, are rejected. His sense of guilt at not joining the army is offset by his participation in the local militia, but he doesn’t have the right uniform and then is injured before he fully commits. Storey paints a vivid picture of his characters and their lives, yet there is a danger, sometimes, that this narrative detail may become a turgid barrier for some readers as, occasionally, scenes become overextended and the narrative loses focus on its more progressive themes.

This seems particularly true from the perspective of having finished the novel, since what it is about only emerges in its latter sections. This is partly due to the bildungsroman form – Colin is initially too young to have experiences and insights that form the intellectual foundation of the book. So, initially the joy in reading Saville is the immersion in the world of a poor working-class community and the multitude of experiences and stories that it has to offer. Yet the true drama of the novel lies in Colin’s social and philosophical crisis. Does he accept his education as an opportunity, or see it as a trap that has elided an essential self he has now lost access to? To this end, Saville is both a compelling and immersive historical drama, as well as a philosophical novel that dramatizes some of the fundamental questions of twentieth-century thinking which question traditional knowledge and morality. 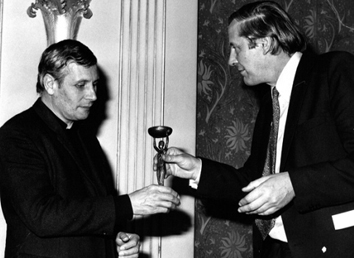 David Storey is awarded the Booker Prize for Saville in 1976.

Towards the end of the third decade of the present century a coal haulier’s cart, pulled by a large, dirt-grey horse, came into the narrow streets of the village of Saxton, a small mining community in the low hill-land of south Yorkshire. By the side of the haulier sat a dark-haired woman with phlegmatic features and dark-brown eyes. She wore a long reddish coat which covered the whole of her, except for her ankles, and a small, smooth-crowned hat which fitted her head rather like a shell and beneath which her hair showed in a single, upturned curl. In her arms, wrapped in a grey blanket, sat a child, scarcely more than a year old, with fair hair and light-blue eyes, who, as the cart pulled into a street several hundred yards from the village centre, where the houses gave way to farm fields, gazed about it in a blinded fashion, its attention suddenly distracted from the swaying of the horse in front.