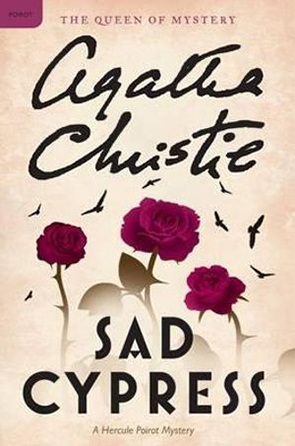 Most Agatha Christie novels I read these days are rereads for me, so reading Sad Cypress was somewhat of a novelty, a Poirot mystery I’d never read before. I’ve never seen a dramatization of it either, although it was filmed along with all the other Poirot mysteries for the series Agatha Christie’s Poirot, starring David Suchet as Poirot.

I found this to be a rather unusual Christie mystery, mainly because the main character is completely inoffensive. In most mysteries from this era there are so many suspects, all with a good reason to want the victim dead, that you think the victim must have been a thoroughly bad lot and that everyone should just celebrate that they’re dead, rather than finding out who did it. But not Mary Garrard, the victim of this story. She is just a nice girl whom everyone likes. Okay, maybe Elinor Carlisle isn’t too fond of her. Elinor’s fiancé, Roddy, falls in love with Mary, but not as a result of anything Mary does. She doesn’t try to seduce him away from Elinor and she actively discourages his attentions. So I’m standing by my claim that Mary is the nicest of any Christie victim I can think of and it does seem a little unfair that she should end up dead. Poor Mary generally does feel out of place in this book, so it’s decidedly unfair that her place eventually is to just be the victim.

The story, itself, is also structured differently from most Christie mysteries. The prologue is the opening of Elinor’s trial for the murder of Mary. Part 1 is a flashback to the circumstances leading up to Mary’s death. Poirot enters the story in Part 2, when he is called in before the trial to search for evidence that will throw doubt upon Elinor’s guilt. Even the person who calls Poirot in, Peter Lord, a local doctor, doesn’t really believe Elinor is innocent, he doesn’t care if she did it or not. He just wants her to be found not guilty. Part 3 returns us to the trial, told from Elinor’s perspective, with the verdict at the end of the second last chapter. Poirot comes back in the final chapter to explain his investigation to Peter Lord. Poirot isn’t even the one who gets to reveal the murderer. That comes out in the trial, itself, via Elinor’s lawyer (using Poirot’s research). Poirot just gets to explain how he figured it out.

I was completely engaged with this story for most of the book. I liked the structure and the story itself. I liked the ambiguity of the storytelling; not letting us know for most of the book if Elinor is innocent or not. But I felt a little let down by the end. It is a typically clever Christie twist, but it really seemed to come out of nowhere, with no hope for a normal reader to figure it out before the reveal. Looking back over it, there are some clues provided, but the main one requires some specialist knowledge that not many people would have and other clues require huge deductive leaps to make anything of them. I did actually figure out how the murder was managed (because it reminded me of the essential plot point in Dorothy L Sayers’ Strong Poison), but I missed the reason for it completely, so can't claim that I solved it.

I mentioned, before, about Mary generally feeling unsure of her place in this story. She is another example of Christie putting a great emphasis on the importance of a person’s class and social status in the world of her stories. Mary is the daughter of the lodge-keeper at Elinor’s aunt’s house. The aunt, Laura Welman, took a great interest in Mary as a child, and paid for her to have an expensive education. Now, returned from several years in Germany, Mary is at a loss over what to do with her life. Her father resents that she has been educated and jeers at her ‘fine ways.’ Roddy observes early in the book, before he meets her that, “People never dream what harm they may do by ‘educating’ someone! Often it’s cruelty, not kindness!” Mary, herself, doesn’t feel at home with other villagers of her class and rejects a young suitor from the village. In a conversation with him, he accuses her of being “too good for us now” and says she is “almost a lady”, to which Mary bitterly replies “almost isn't much good, is it?” Thanks to Laura Welman’s interference, Mary no longer has a place in her normal sphere but neither is she accepted by people like Elinor as an equal. That she is incredibly beautiful and instantly attracts Roddy away from Elinor adds to her problems. In all, Mary seems to demonstrate that Christie felt people belonged to clearly defined social classes and that to move out of your predefined class could only lead to problems. Like many stories of the Golden Age, Sad Cypress also reflects upon the British class system.

I would say that Sad Cypress is a mystery that is definitely worth reading, but I wouldn’t put it up there as one of Christie’s best. It’s good but not great, and not one I will recommend to people who want to start reading Christie. 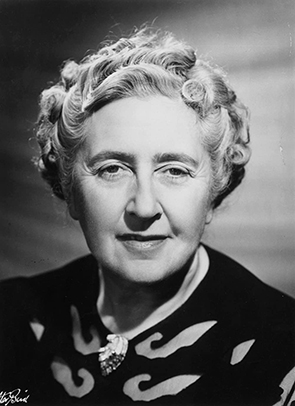 “Come away, come away, death, And in sad cypress let me be laid”


The book’s title is taken from Shakespeare’s Twelfth Night. In Twelfth Night, the line is part of song sung by Feste about a young man whose love for a fair, cruel maid is unrequited and who dies from his unrequited love. After reading the book, I still have no idea what relevance the quote has, unless it is meant to relate in some way to the Elinor/Roddy/Mary love triangle. Mary, herself, never seems to be in love with anyone and certainly doesn’t express any wish to just die and be buried.
Widget is loading comments...