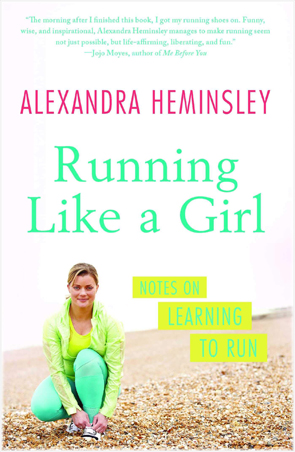 I felt a surge of new awareness: I was a runner for life. No matter what else was going on around me, no matter how long the gaps between my runs, no matter how high, how long or fast my races were, I was a runner. Once you have taught yourself that running isn't about breaking boundaries you thought you could never smash, and realised that it is about discovering those boundaries were never there in the first place, you can apply it to anything.

I went for a run this morning. Nothing unusual there you might think. I'm a runner, I go running. Except I haven't been a runner for months. I used to run a few days a week, but I've found I really prefer working out at the gym in hot weather, so my running was down to parkrun on Saturday mornings. We had so much smoke constantly in the air December/January that breathing became impossible when running, and I was just walking the parkrun course. Then, early February, when the air started clearing, I broke a toe. It took some time before I could even walk any distance, let alone run. I rested up, volunteered a lot at parkrun, then finally I was starting to feel like I could maybe manage a run. I did some shuttle runs in a boxing class on the lovely bouncy surface at my gym without feeling pain in my foot. I thought maybe I could test out my foot the next Saturday at parkrun. But before I could get the chance to try, parkrun was cancelled globally until at least the end of April (and probably will be cancelled for much longer than that) due to Coronavirus. I had got out of the habit of just running by myself, so despite my social media feeds being full of former gym junkies being forced to give running a go while they have no gyms, I just didn't do it. Last night I finished Running Like a Girl and made a decision that I would get up earlier in the morning and go for a run. As Heminsley discovers at one point, to find out if you are a runner, you have to go out and run.

This is a fairly light-weight and conversational book. If you want an actual how-to book on running, this probably isn't the book for you. But if you want to get a feel for what it is like to be a non-runner who decides to start running, to get an idea of the pain of starting and of the feeling that people are looking at you and judging, and about how much it can just hurt at first, this is a good book to read.

The first part is Heminsley's personal story of deciding to give running a go after decades of virtually no exercising at all. She decides to sign up for a marathon so that she has a goal to work towards. She details her marathon training and then what it was actually like to run that marathon. Parts of the book reminded me of a movie I watched recently - Brittney Runs a Marathon - but with the main difference that Heminsley seems like a much nicer person originally than Brittney. Both Brittney and Heminsley have insecurities that their first attempts at running expose, and both ultimately reveal charming, feel-good stories.

The second part of the book is more practical. It discusses common running myths, tips on buying shoes, general running injuries that you might experience and some general suggestions for enjoying your first race. Heminsley even suggests wearing bright nail polish to make you feel good as you run. This last section of the book is about a quarter of the book’s entire length and is fast to skim through. It has some interesting advice, some of which I will try to adopt. But the first part of the book is where the interest lies. You can find running tips in any running forum online, but you can't easily find inspirational stories like Heminsley's in these forums, especially not ones as humorous as the stories in this book.

Heminsley is a journalist, and I think this is part of the reason this story is so readable and enjoyable - she knows how to write in an engaging, light-hearted way that has general appeal to her readers. Last year I started reading Running that Doesn't Suck by Lisa Jhung, but couldn't get interested in it. An already fit college athlete who is forced to start running as part of her training and who magically starts loving it just doesn't have the same appeal as Heminsley's self-deprecating comments on her first attempts at running.

The only part I really didn't relate to in this book was a bit near the beginning where she talks about how she was able to embrace her masculine side and develop a competitive streak. What, females aren't meant to have competitive sides? We are meant to always take a passive role and just watch on admiringly as males compete? Although this annoyed me a little, it was just a minor part and I almost forgot about it until near the end of the memoir section when Heminsley started to research the history of distance running for women. It is only relatively recently that women have been allowed to compete in distance events such as the marathon. Roberta Gibbs and Katherine Switzer's experiences in joining the Boston marathon in 1965 and 1967, respectively, have been much publicised in recent years. The Olympics only added the women's marathon to the games schedule in 1984. Part of the reasoning for the refusal of organisers to allow women to compete was for fear of harming their femininity and reproductive health; some officials warned that distance running could cause the uterus to fall out (page 137). Given Heminsley's expressed outrage at discovering this history, it does feel wrong that she expressed a need to embrace her masculine side.

It was cold this morning. I didn't really want to get up early, go out in the cold air and run. But I did it. And I discovered that I still enjoy running. I've lost running fitness. It will take me time to build that back up, but I enjoyed my run. Heminsley expresses my feeling like this: After a lifetime of accepting that my body was to be looked at rather than used, I was learning to appreciate what it could do. (page 59). Like Heminsley, I spent many years not exercising. So, for me, this particular line resonated. After starting to run a few years ago, and since starting to work-out in the gym again, I have enjoyed embracing what my body can actually do. I've also enjoyed achieving goals, such as running a full 5 kilometres without slowing to a walk. I may not ever run a marathon, but I can appreciate the amount of dedication and training that goes into being able to run one. I enjoyed Alexandra Heminsley's story and I think most other females who are considering starting to run would also enjoy it. Recommended. 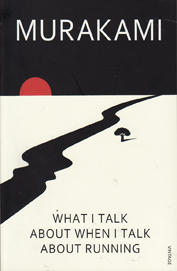 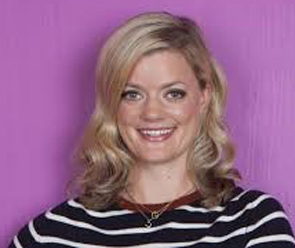 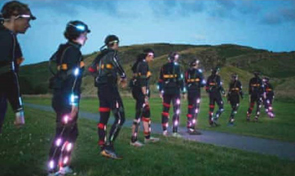 Runners lined up, ready for the Speed of Light run, a live running installation held as part of the Edinburgh Arts Festival. Runners wore light suits, controlled from a distance, and ran in choreographed formations up and down Arthur’s Seat throughout the night. Heminsley’s descriptions of taking part in the event form one chapter of Running Like a Girl. The experience formed part of her acceptance that running was not just a way of staying fit, but of feeling the euphoria of finding out what strength her body was capable of.