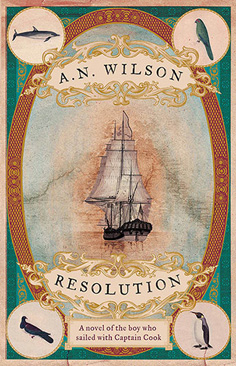 A highly enjoyable book, about the life of George Forster, who as a young man, sailed with Captain Cook on a voyage around the South Pacific.

This is not a chronological narrative, it jumps around to different places and times, weaving together how George's early life & the voyage with Cook shape what he becomes in later life. We start early in the voyage, then go back to his early life, exploring his strange upbringing with his father and how it led to them joining Cook's expedition. Then we jump to his adult life, as he begins his unhappy & unfulfilling marriage with Therese.

At first I found this jumping around a little jarring, but by the end the two stories have blended together to form the whole story. The final chapters, one set in revolutionary France, in the middle of the Terror, and one set as the Resolution arrives back in England just fit together beautifully.

This book took me longer to read than it should have, as I kept putting it down to look up more details on some of the things or people mentioned. Like most people my age, I learned about Cook in history at school, but I learned so much more about the man and his achievements from this book. George's memory of Cook is central to his life, and through George's eyes we see him as an intelligent and enlightened man who is not too tolerant of fools. Willing to claim a new island for Britain, but always trying to keep on friendly terms with the natives of all the lands they visit. The weapons they have are only to be used in self- defence, not to conquer. And you really get a feel for the epic nature of the voyage, especially when they sail into the Antarctic circle.

And how could I have lived this long without knowing about the Holy Prepuce? I'm deeply saddened to learn that the pope in the 1960s decided that Catholics should no longer celebrate this feast day.

Highly recommended, partly for the interesting history, but mostly for the great story.