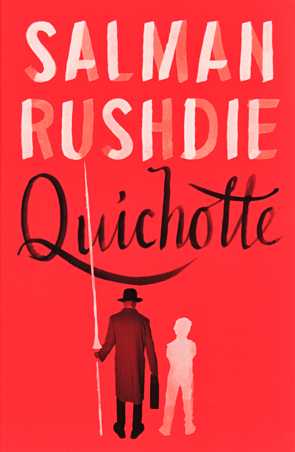 Quichotte, Salman Rushdie’s latest novel, is both clever and something of a disappointment. I first read Rushdie when he published that novel in 1988 and I have avidly bought each book he has published since. His works are often a sprawling mess (in a wonderfully exhilarating way) full of cultural and literary allusions, verbal play and outrageous plots, driven by a thousand-and-one-nights magic that intrudes upon the modern world. It is not surprising, then, that Rushdie should turn his pen to a modern-day version of Don Quixote to express a deeply-felt concern for modern America. Don Quixote, a seventeenth century novel originally written by Miguel de Cervantes, has the potential to characterise a sense of craziness, of things unravelling, of noble ideals and lost causes. Quixote is a man whose brain has been addled by reading Romances, whose delineation between fantasy and reality has failed, and who sets out as an errant knight to win the favour of his idealised woman, Dulcinea, as an expression of his own ennobled sense of the world. Quichotte, Rushdie’s latter-day version, is a failed opioids salesman whose brain has been addled by television and modern culture, and sets about on a quest to win the hand of his idealised woman, an Oprah-like television personality, Salma R. His motivations and character must be left to a reading of the novel.

Rushdie’s female lead naturally raises some questions for the reader which are as good a place to start as any. Her name being so close to the author’s, it is only natural to wonder at its significance. The name alone suggests that Rushdie is playing with the idea of inserting himself into the narrative. That his characters might take on certain characteristics of himself and his history. Yet Salma R, like Quichotte it turns out, is the fictional creation of Sam DuChamp, a middling spy novelist who has turned his hand to larger themes. DuChamp, it seems, would be a more likely representation of Rushdie. DuChamp explains to his dying sister that in writing his novel he wishes to:

…take on the destructive, mind-numbing junk culture of his own time just as Cervantes had gone to war with the junk culture of his own age. He said he was trying to also write about impossible, obsessional love, father-son relationships, sibling quarrels, and yes, unforgivable things; about Indian immigrants, racism towards them, crooks among them; about cyber-spies, science fiction, the intertwining of fictional and ‘real’ realities, the death of the author, the end of the world. He told her he wanted to incorporate elements of the parodic, and of satire and pastiche.

The passage is about as succinct a description of what this book attempts as one is likely to find. But it, too, raises questions in the reader’s mind, as most of the narrative does ad infinitum, about Rushdie’s presence in the novel, simply through its self-reflexivity. It is reasonable to draw conclusions, for instance, between the autobiographical aspects DuChamp includes in his novel, and Rushdie’s teasing suggestion that he is doing the same. Much of DuChamp’s personal story – his estrangement from his dying sister, even his son – find a parallel in the novel as he writes about Quichotte:

Quichotte – the loner in search of love, the loser-nobody who believed himself capable of winning the heart of a queen – had been with him all hi life, a shadow-self he had glimpsed from time to time in the corner of his eye, but had not had the courage to confront.

Quichotte wishes his ‘son’, Sancho, into existence (under a meteor shower in true wish-upon-star fashion), and Sancho, like DuChamp’s son, struggles to attain his own independence. Salma R, like Sister (DuChamp’s sister, never named) who struggles with her physical health, struggles with her mental health. Like Rushdie, she leaves an old life behind in India to make a new life in the West.

Discussing the author within the text is obviously problematic, given that there is a natural desire to assume that his avatars speak directly for him. Rushdie’s DuChamp, if he is meant to act as a mouthpiece for Rushdie, is suitably humbled against Rushdie’s real literary reputation. And he has much to say about the meaning of the story and there are parallels, again, with Rushdie’s life: he had begun to have a sense of something coming after him, of dark-windowed cars parked on the corner of his block…. It’s a problem Rushdie is obviously willing to tease at, since it is always perilous to equate any character as the mouthpiece of an author. John Fowles turns up in a train in The French Lieutenant’s Woman to watch Charles Smithson, but his presence is not to be read as Fowles intruding upon the narrative. Rather, he forms part of the novel’s dialectic between nineteenth and twentieth century fiction and social values. ‘Chaucer’ is one of the pilgrims of The Canterbury Tales, yet when it is his turn to tell a story he is asked to sit down, so boring is his story.

There are a great many knowing winks from the text and interpretations that make Rushdie feel very much like an intrusive author. At times this goes beyond literary play to the point that one feels like he isn’t trusting the reader with his creation. The decay of the Earth in the novel, we are told at one point would be parallel to the decay – the environmental, political, social, moral, decay – of the planet on which he lived. Having an author-as-character writing the book allows this kind of thing to some degree, and the postmodern awareness within the text is not new, but the suggestion that these intrusions might be attributed to the sprawling mess of the narrative that Rushdie has tried to adapt to the picaresque tradition, is itself their justification. But the problem doesn’t lie with a picaresque episodic structure, but with DuChamp’s own description of his creation which I have quoted above. It is possible that Rushdie is attempting to cover too much and sometimes he seems to skim the surface of his subject with these literary shortcuts, rather than delve deeper.

But Quichotte is more than just a vanity project, if that’s how it sounds so far. If the book does not always hit its mark, it does sometimes. The Blue Fairy tells Sancho that there are two selves, the inner self and the self that interacts with the world. This makes Quichotte an apt metaphor for the modern age, his inner insanity reflecting the breakdown of Western stability. There is England torn asunder by a wild, nostalgic decision about their future and an America where children were murdered in schools because of a constitutional amendment that made it easier to murder children in schools. Rushdie’s (or DuChamp’s ) character is, to an extent, lifted readymade from Cervantes work and applied to the problems of modern America – guns, conspiracy theory, truth and reality, the media and so on – for it to be enough for the reader to understand that America has been untethered from the fundamental core of its culture and political system: the identity accorded by history, the social accord achieved through quality discourse and the stability offered by facts. Donald Trump is never identified directly in the text, but it is clear that the fragmentation of reality and the social fabric of society that this book fictionalises as a science fiction narrative is predicated upon his presidency in a land where Normal is guns and the normal America … really wants to be great again.. The narrative describes a wilful president … who was obsessed by cable news, who pandered to a white supremacist base, and who had played golf with Salma C’s predecessor and talked locker-room shit to him about girls.

The allusion to Trump’s notorious grab them by the pussy remark, is relevant also to the shift in modern values concerning sexual etiquette, which call into question the values that Quichotte – and later Sancho – adopt from Quixote’s pursuit of Dulcinea in Cervante’s classic. Rather than appearing a noble knight, Quichotte risks appearing a stalker, and this again recalls Rushdie’s years in hiding after he had a death sentence placed upon him by Iran. There is a sense of imminent threat felt by Salma R in her dealings with Quichotte, which undermines the noble aspirations Quixote’s quest was meant to represent. The Blue Fairy (a version of Jiminy Cricket even appears in the novel) tells Sancho that men who give love potions to women in the modern world would be called rapists. Clearly, the sexual landscape has changed.

There is so much that is clever and thought provoking in this novel, that it is a shame that its denouement is somewhat disappointing. For those familiar with Rushdie’s work, there is some comparison to be made with Two Years Eight Months and Twenty-Eight Nights. In that novel Rushdie’s narrative tipped from the compelling magic realism of some of his earlier work into trite fantasy that was little worthy of his talent, recalling the overstated fantasy battles of many lesser writers. In Quichotte, Rushdie once again opts for spectacle in a somewhat trite science fiction scenario that recalls Star Gate and Land of the Giants; a denouement that somewhat confusingly places the author/God once again at the centre of the narrative in an all-too-clever resolution that loses track of the novel’s larger and more interesting social and political themes.

For me, the problem wasn’t just that Rushdie was attempting so much, but that his characters felt allegorical – not real but representations of Rushdie’s views. Reality is disintegrating as physics mysteriously falls apart; there are werewolves; people turn into mastodons and the central protagonist has lost touch with reality. This is America. The problem is, this kind of thing risks leaving the characters as nothing more than ciphers of Rushdie’s political dialectic, which is potentially disengaging for a reader. How you feel about all this, I guess, rests on whether you see Rushdie’s narrative as a clever postmodern pastiche or a book that tackles big themes but doesn’t effectively focus on any one aspect satisfactorily; that in fact, the author is still rummaging about as the audience comes in, trying to clear everything up. 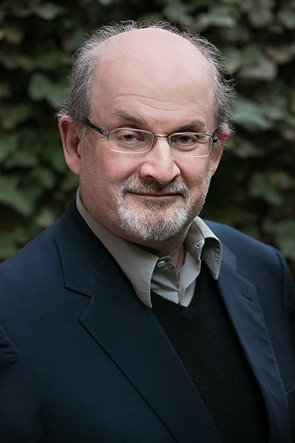 Rushdie's novels are a mixture of the real world and fantastic episodes drawn from myth and pop culture. He also delights in verbal play, often punning on character names. In Satanic Verses his character Allie Cone is a famous mountain climber and earns the moniker ‘the ice queen’. It shouldn’t be any surprise that Rushdie eventually refers to her as ‘Ice Queen Cone’.

In Quichotte, Rushdie includes a pronunciation guide before the opening of the novel, explaining that rather than pronouncing his protagonist as is traditionally the case, ‘key-Ho-tay’, he would prefer his character to adopt the French pronunciation, ‘key-SHOT’, for reasons which the text will make clear. Naturally, it’s another pun, an allusion to Quichotte’s connection to the drug trade through his wealthy cousin, Dr.R.K.Smile. Read the book to find out.