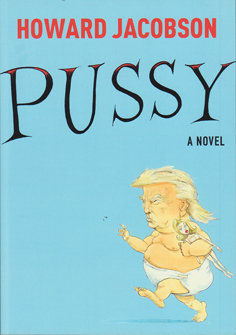 When I finished Pussy, I closed the book and then considered the cover. It’s a rather plain cover. There is a caricature of Donald Trump in a man-sized nappy toddling along with a bulbous-boobed Barbie doll clenched closely. The title refers to Trump’s infamous remark made in a bus to Billy Bush in 2005 and revealed during the 2016 presidential campaign. When you’re a star, he told Billy Bush, you can do anything to women, even grab them by the pussy. This remark would have scuppered past presidential campaigns in days of yore, especially in conservative America where even the hint of marital failure or unorthodox views can poison a campaign. But Trump was different. Trump campaigned against the perceived badgering of powerful liberal classes for which Hilary Clinton became an avatar, and instead of gaining political mileage from Trump’s faux pas, Clinton was doubly whammied by her husband’s philandering past, which Trump dredged as an effective bulwark against his own, and Hilary Clinton’s perceived enabling of his actions.

So, what was it about this cover that had caught my eye? As I said, it’s a plain cover and it’s as simple as that. I walked over to my bookshelves and picked books out randomly, inspecting the back cover, the front cover and the inside flaps. Because it had occurred to me that this book may be unique in the annals of modern publishing. Inside or out, it does not have one recommendation. No Spectacular from The Times as I am used to reading, or perhaps more appropriate, Thought provoking from some sage critic. I wasn’t assured that it was A book long to be remembered. Nothing.

I pulled Jacobson’s J from the shelf. Sure enough, on the inside cover Jonathan Safran Foer, Christopher Cleave of the Sunday Telegraph, Tom Adair of the Scotsman and Kate Saunders from The Times had all leant their voices to persuade me in my purchase. Actually, The Times had said that J was Brilliant blistering comedy.

I’m not sure whether I can draw any conclusion from this omission except that critics A) weren’t shown the book, B) gave universally poor reviews, C) the publisher wanted a clean cover, D) this thing was too damned political already for anyone to want to put their name on it except the author. Well, there’re a few neat little illustrations from Chris Riddell, but that’s about all.

Apart from being a satirical work about Trump in the guise of Fracassus, a spoilt boy sent away by his parents to learn political acumen, Pussy turns out to be bildungsroman in form. Fracassus is about 15 years old early in the novel, and we follow his development as he becomes briefly enamoured of a young woman from the liberal classes, and is then sent overseas to keep him out of harm’s way and to educate him under the tutelage of his mentors, Dr Cobalt and Professor Probrius. There are many incidents throughout the novel that are readily identified with Trump. Trump’s associations with Russia and his supposed bromance with President Putin are represented by Fracassus’s journey to Cholm where he meets Vozzek Spravchik, an obvious surrogate for Putin, who is the Foreign Secretary, Minister of Home Affairs and Culture Secretary all rolled into one. Or there’s Trump’s infamous mocking of Serge Kovaleski, who refused to corroborate Trump’s story that thousands of Muslims cheered the fall of the twin towers during 911:

‘The guy who makes my bed. He’s spastic. He’s all right when he’s making the bed but when you speak to him he’s like …’ Fracassus did his imitation of a badly strung marionette to show Probrius what Megrim was like. He let his tongue loll out and dribbled. (57)

There are many parallels throughout the story with Trump: things Fracassus says, intellectual attitudes (or lack thereof) with people close to Trump, as well as the presidential race against Sojjourner, the first woman to run for the position of Prime Mover in the walled republic of Urs-Ludas; a campaign in which Fracassus promises to Muck out the Pig-Pen and in which the Fracassites, devoted follows of Fracassus, violently eject any dissenters from his rallies.

In my troubled search for a reviewer of this novel I first found Mark Lawson’s Guardian review. Lawson points out that despite the number of parallels to Trump’s story there are a number of notable digressions. For instance, Spravchik, the Cholm leader who represents Putin, is also a host of a reality TV show when Fracussus meets him, thereby conflating the characters of Trump and Putin. I didn’t find this so troubling, since Jacobson’s licence only exaggerates Trump’s supposed adulation of Putin because Fracassus later gets his own reality TV shows, suggesting that Spravchik has been a role model. Other digressions, however, are more difficult to square. Sojjourner, the Hilary Clinton character, is first introduced as a potential love interest for Fracassus, albeit, we later find, in the employ of his father. Fracassus is also from the city’s ruling glass – his family are near royalty – which doesn’t sit well with the idea that Trump came from outside the established ruling elite. Urs-Ludas, the name of the city that Fracassus’s family rules, translates as the city game, perhaps as a reference to the power the family derives through development, but they are political elites, nevertheless.

There are other differences in the characterisations, Lawson notes. He identifies Philander with Boris Johnson and Caleb Hopsack with Nigel Farage, only to be critical of the representational differentiations. I think, however, on the whole, most readers will focus on the representation of Trump, himself. If some of the story isn’t an immediate corollary of actual events and people, the broad brush strokes seem familiar, nevertheless. I think a test of a book like this would be if a reader could read it and enjoy it without any knowledge of Trump or his campaign. I think It would be hard to find that reader, but I think the satire would work.

Of course, this raises another issue that is inescapable. This book is really aimed at a particular audience. I can’t imagine a true Trump supporter being pleased by this book, nor can I imagine that it would persuade a supporter to change their mind about him. Evidence so far seems to suggest that Trump voters still support him and find factors other than Trump’s character or experience to be the reason for the shaky start to his presidency. On the other hand, there is a certain level of schadenfreude, I think, for any perceived failure Trump is forced to endure, for those who despise Trump. This book is for them. I personally don’t like Trump and I found myself underlining witty remarks and satirical barbs. Portraying Fracassus/Trump as a baby on the cover is the whole point of this book. As Fracussus grows he is uninterested in learning, cannot express himself, does not read, has no respect for others, and is enamoured of historical figures like Nero and Mussolini. For most of the book he is still growing, still becoming the man he will be, shaped by cynicism and privilege. For most, Trump is known as the business man who became a reality TV star and then a president, but it seems Jacobson finds it difficult to imagine him as anything other than a spoiled, uncaring child.

This book is well-written and funny, depending on your point of view. Trump-naysayers will potentially like it, but it is admittedly not offering anything new. Jacobson is preaching to the converted (he literally parodies the book of Revelation at the beginning). In short, Jacobson has taken some well-practised blows at his literary effigy on behalf of a class of people who don’t know what else to do. I enjoyed it. Others may not.