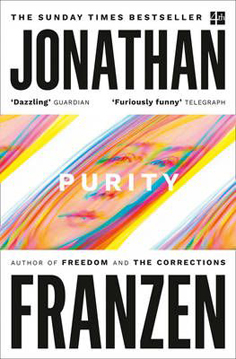 The eponymous title of this book refers to Purity Tyler, a young woman crippled by the burden of student debt, struggling to give emotional support to her hypochondriac and emotionally needy mother. Purity, also known as Pip, has been raised by her mother never knowing her father. Now, as she tries to establish her career, navigate the difficulties of romance, as well as support her mother, Pip is beginning to wonder who her father is. There is no sense asking her mother. Her mother staunchly refuses to tell her, saying that she acts only to protect her daughter. This simple domestic situation helps to establish some key issues in the novel. First, there is the issue of identity. There is also the problem of leading a moral life and the value of knowledge.

Pip is lured into an internship with Andreas Wolf, a mysterious Internet celebrity who for twenty years has used technology to expose the malfeasance of corporations and individuals, with the opportunity for professional advancement and the promise that he can use his resources to help find her father. Andreas is modelled upon the likes of Edward Snowden and Julian Assange, except that Andreas has managed to maintain his moral integrity and seems universally revered, not just by the public, but even his ex-lovers. He is currently extricating himself from an affair with Toni Field, a film star playing his mother in a biopic about him, as well as the woman who helped Pip make contact with Andreas, Annagret, also a former lover, willing to work in his interest. Pip, who is wary of his intentions, suggests that the product of Andreas’s Sunlight Project – because sunshine disinfects – or purifies (the word is a leitmotif) – is Andreas himself: Wolf is still reasonably pure. In fact, that’s his whole brand now: purity.

This is just the beginning of the book, and a rather sparse account at that. Purity is written on a large scale, beginning in present times and spanning back to East Germany and before, to make sense of the lives of its key protagonists: Pip, Andreas Wolf, Tom Aberrant, a journalist with a shady past connected to Andreas, his partner Leila and Anabel, his difficult ex-wife. The novel is written in parts, each concentrating on certain characters and facets of the story, and it is not until the story is well-progressed that its disparate sections begin to coalesce into an integrated story arc. Andreas, who runs the Sunshine Project, is shaped by his youth in East Germany before the fall of the Wall, and a terrible secret he and Tom Aberrant share from that time which shapes not only their own lives but the lives of all those around them.

Andreas’s secret is at odds with his public persona, the righteous Internet blogger who reveals the secrets of others. When he is photographed with Tad Milliken, a man in exile to avoid a statutory rape charge and notorious for having shot a pet macaw with a pistol, he chases down the photographer and uses all his persuasive power to suppress the photographs. Despite Andreas’s public persona, it is not hard not to see the hypocrisy.

And his public persona is at odds with Tom’s perception of Andreas and his project. Andreas’s and Tom’s relationship has strained over the long years since East Germany. Their former friendship is not only central to the plot tension and to understand the character relationships, but forms a dichotomy between old and new worlds, old and new technologies, because Purity is also about knowledge, how we process value it. Assange represents the worst of the leakers, Internet moguls who dump terabytes of information onto the Internet with little to no analysis, while journalist are tasked with the problem of forming a narrative to make sense of the information and to give meaning to the world. It’s a dichotomy that puts traditional information and the Internet at odds.

It is also a differentiation which calls into question the freedoms of Western democracy. Andreas, a man who has grown up with the strictures of a totalitarian regime and its instrument, the Stasi, sees the liberating force of the Internet as a veiled totalitarian construct, since totalitarianism, much like East Germany, is nothing more than a system from which one cannot leave, and from which one can never escape the ignominy of exposure:

The aim of the Internet and its associated technologies was to “liberate” humanity from the tasks – making things, learning things, remembering things – that had previously given meaning to life and thus had constituted life. Now it seemed as if the only task that meant anything was search-optimization.

The result of this is the creation of distinct social dichotomies, between those who wield the power of the Internet, and those who do not:

If – and only if – you had enough money and/or tech capability, you could control your Internet persona and, thus, your destiny and your virtual afterlife. Optimize or die. Kill or be killed.

And Andreas, a man with a secret and a public persona to maintain, needs to be in control. In seeking that control he only exacerbates his sense of an inner self at odds with his public image - a parable of the age of Facebook, perhaps.

Purity has many strengths and only a few weaknesses. One issue I had – not a weakness, really – was with the character of Anabel. Tom’s wife is complaining, emotionally manipulative and constantly determined to win moral competitions. Reading her story, particularly from Tom’s point of view, which was the only section of the novel written in first person, was oppressive. It felt like a controlling relationship from which I couldn’t escape: not unless I put down the book. I rarely react to characters in books and accept them for the part they play in the story. However, Annabel was hard to take with her determination to be hurt, to be the victim and to be in the right, constantly. Some parts were painful to read.

Towards then end, I also felt a jarring moment, as unsubtle as Anabel's manipulations, when Franzen is a little heavy handed in making his point:

“Things had become so violent and dirty between us. I wanted something purely good to come of it. And something did. You did.”

“I am far from purely good.”

“No one’s really perfect. But to me you were perfect.”

It’s an odd moment in a book which eschews the notion not only of totalitarian models but moral absolutism, and the repetition of purely reminds us how many times we have read the word or its variants throughout the novel. Even less subtle is Franzen’s virtual explanation of Purity’s nickname, Pip, which, for readers of Dickens, needed no explanation, let alone several times throughout the course of the story. Perhaps I'm being too harsh, since Franzen is also a playful writer: So many Jonathans. A plague of literary Jonathans. If you read only the New York Times Book Review you'd think it was the most common male name in America.

Among the novels strengths are its complex plot that integrates its disparate parts well. It uses a large historical canvas with compelling characters whose personal problems reflect Franzen’s themes. The book is intelligent and well written. All the characters, apart from Pip, have something to hide, and the plot turns upon these secrets, which in turn compromises the integrity of those who keep them. To say more would be to spoil the story of Purity. It’s a story well worth reading.

A Theory of Secrets

There's the imperative to keep secrets, and the imperative to have them known. How do you know that you're a person, distinct from other people? By keeping certain things to yourself. You guard them inside you, because, if you don't, there's no distinction between inside and outside. Secrets are the way you know you even have an inside. A radical exhibitionist is a person who has forfeited his identity. But identity in a vacuum is also meaningless. Sooner or later, the inside of you needs a witness. Otherwise you're just a cow, a cat, a stone, a thing in the world, trapped in your thingness. To have an identity, you have to believe that other identities equally exist. You need closeness with other people. And how is that closeness built? By sharing secrets...