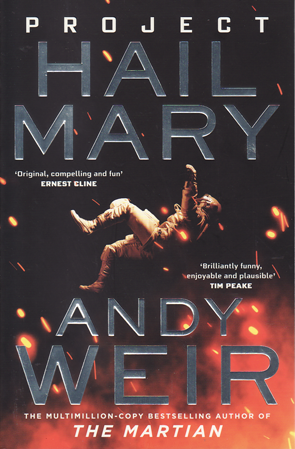 Project Hail Mary is plot driven and so it is difficult to discuss it without spoiling some of the novel’s most interesting features which rely upon being revealed. So I’ll try to limit my comments to what might be gleaned by an intuitive reader who has read Weir’s previous books, and to aspects of the novel alluded to on its back cover.

Andy Weir’s latest space drama has more in common with his first novel, The Martian, than his previous novel, Artemis. I thought this was somewhat promising since Artemis had revealed Weir’s limitations as a writer. He’s not great at characterisation and the problems faced by Artemis’s protagonist, Jazz – a host of enemies, along with several difficult interrelationships – do not play to Weir’s strengths as a science nerd interested in physics and computer engineering. Artemis therefore lacked the primal force of Mark Watney’s dilemma in The Martian: he was stuck alone on an alien planet and he was “fucked”. That had me hooked. Everything that happened after that was an exercise in problem solving that drove the plot. As a reader without a background in science, Watney’s situation provided fascinating science facts, his solutions seemed genius and I was there, with him.

Weir captured lightning in a bottle when he wrote his first book, and it feels to me that he has tried to do that in his next two books without succeeding. Project Hail Mary has many similar elements to The Martian. We have a protagonist, Ryland Grace, an astronaut on the Hail Mary, a spacecraft hurtling through space, isolated from the rest of humanity. He has a monumental problem to solve, along with the inevitable obstacles that difficult situations entail. And the stakes are survival. Except this time, Weir has heightened those stakes. Grace, after awaking to find his two companions have not survived their induced comas, must find a way to save the entire human race.

This is a big enough challenge for any character, but Weir tries to heighten the drama and focus his readers’ attention upon each stage of the problem as it is revealed, rather than giving us the overall picture to begin with. He achieves this by giving Grace amnesia. Grace conveniently remembers all his science, but he initially can’t remember his name, why he is on the spacecraft or what his mission is. This a common trope in science fiction, which allows the writer to control the scope of the narrative and add drama, as the reader discovers a new world or situation, along with the character. But the use of amnesia feels somewhat contrived here. We’re later given an explanation for Grace’s amnesia, but even so, his slowly returning memories often feel too fortuitous, too conveniently retrieved, that they seem like overly convenient exposition. Grace never seems to remember anything irrelevant to his current moment, and we learn little about him, personally, extraneous to the mission. Even the fact that he was a high school science teacher reveals little about him other than that he is good at science and that he wasn’t just an ordinary high school teacher.

Which brings me to the matter of characterisation. Weir doesn’t really attempt characterisation, much. People are either scientists or administrators or engineers – in short, a type – and if there is anything to learn about them, it’s not likely to reveal much about their motivations. There is little to Eva Stratt, in charge of the worldwide effort to save the Earth from cosmic destruction, for instance. She is maniacally driven to achieve her goals and save the human race, but she’s not a people person, and there is little revealed psychology to her. Most of what we understand about her is that she has been warped, somewhat, by the power given to her. And there is often a schoolboy immaturity to Weir’s writing that distorts what might be an interesting thought experiment in fiction. Stratt’s character could have been an opportunity to explore something about power and psychology or our priorities in emergencies, or the state of the human race, but it isn’t there. This sort of science fiction is more ably handled by Cixun Liu. Instead, Weir’s narrative seems more focussed on impressing his reader with how cool it might be to have that power and kick arse (I think American’s say kick ass), rather than really reflect upon it. Stratt is given enormous powers by world governments to undertake her mission, but the mechanisms by which this was done and how that power is maintained is unexplained. The extreme measures taken by her and her team to save the world are laughably devoid of oversight. And when Weir writes about two scientists who have entered into a sexual relationship, their openness about it is merely weird and unbelievable: an exaggeration of rational scientific minds. Snigger. When it comes to characterisation, it is easy to assume that Weir’s nerdy scientific protagonist is really just an avatar of Weir, himself.

The plot is entirely driven by the kind of problem solving readers experienced in The Martian. This, alone, doesn’t make the novel feel formulaic, but there is a sense that Weir has a range of slider knobs, kind of like a mixing panel for music, in which he can increase some aspects of the survival situation for dramatic effect, while reducing others. Mark Watney’s primary considerations were lack of food, communication and transportation. He had to learn how to grow potatoes to feed himself, how to set up a communication device to speak to Earth, and ensure he could travel the distances he needed on Mars in order to survive. Ryland Grace is issued with a new set of priorities. Food is not his primary consideration, for instance, since he is supplied by his ship. Instead, Grace’s primary problem is that posed by his mission objectives, and how to adjust to the new realities of what he finds in space. Later, he must also consider the problems of protecting his source of fuel.

Yet, while Project Hail Mary is closer to the spirit of The Martian than Artemis (I don’t assume an author has to continually write the same novel, but this kind of narrative plays to Weir’s strengths) it is not as compelling. The thing about The Martian was that it projects a little way into the future, to a time when it is easy to imagine humans landing on Mars. Watney’s plight – being stuck on an alien planet and forced into an ultimate survival situation – speaks to something deep within. And the scientific strategies he employs, it would seem from my perspective, are founded in the realities of science as we know it. Project Hail Mary strays from that, somewhat. To create Grace’s problem (in fact the very reason he is aboard the spaceship) Weir imagines a specific threat to Earth that is approached without any realistic consideration for the divisions in world politics and the vagaries of human nature – that is, how the mission came to be – along with other scientific fictions unknown to our current reality that Grace encounters upon his mission. This is fine to do in science fiction. It is the very stuff of speculation. Some would point out that the novel explores themes about tolerance and cooperation, and this argument could easily be made. But I would suggest that the story is applicable to these issues, rather than that it overtly seeks to explore them. This is not really speculative fiction, despite its premise, but an adventure story, maybe even a buddy story of sorts. But that kind of story needs character writing as much as scientific knowledge to achieve, which does not play to Weir’s strengths. And while it is fun, mostly, is not as compelling as Weir’s first book (and possibly a little too drawn out: one or two many problems for Grace to solve). In the end, it didn’t feel original. This wasn’t helped, for me at least, with the ending being exactly the same as M.R.Carey’s The Girl with All the Gifts. That’s a spoiler of sorts, after a review in which I managed to avoid them. But really, if you have read that other book, you’ll really not get it, unless you choose to read Project Hail Mary. 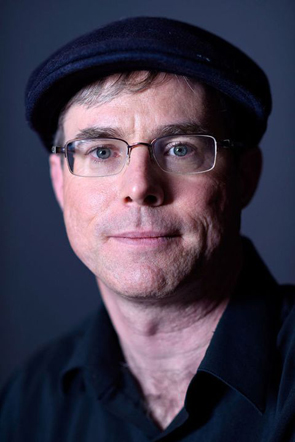