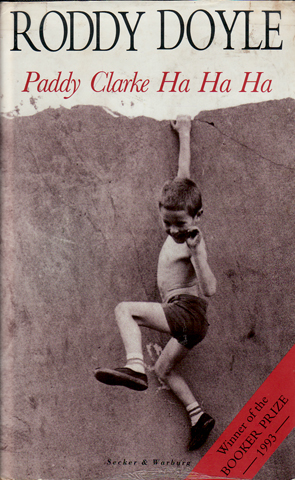 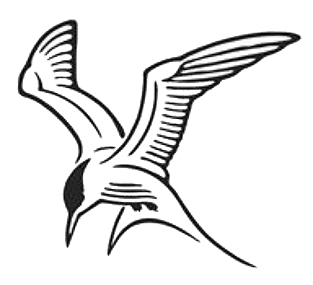 Reading Paddy Clarke Ha Ha Ha (the title makes sense by the time you reach the end of the story) may encourage readers to indulge in nostalgic reminiscences. Some scenes seemed specific to my own experiences of growing up. Like many young boys I experimented with the effects of a magnifying glass on ants: I endured the horror of mandated school medical examinations; I entered stormwater pipes with friends and followed them underground; I explored new housing areas with friends as they were being built; my mother had a ‘mangle’, as Patrick calls it, one of those old washing machines with rollers for ringing water from clothes (I even got my arm caught in it); and I once heard on the radio that guerrillas had killed people in an attack in Asia and I wondered why gorillas would do that and how they became so organised. All these memories were drawn from similar or identical scenes from Roddy Doyle’s novel about Patrick Clarke’s childhood as he grows up in a fictional working class suburb somewhere in Dublin in the 1960s. Patrick’s childhood is typical of other stories of growing up: of close friendships, conflicts, school, parents and formative experiences. We follow Patrick, his brother Francis (nicknamed ‘Sinbad’) and their friends as they engage in games that madden adults in the neighbourhood, inflict casual cruelties upon one another, are subjected to the indignities of the school system, and struggle to come to terms with the slowly emerging realisation that their parents’ relationships are on the cusp of breaking down.

What is most skilful about this novel, apart from the fact that it is highly engaging and entertaining, is that it successfully captures Patrick’s voice and renders his perspective entirely believable. This is why a distinction must be made between how the novel may evoke nostalgia or reminiscences in the reader, but is not written from that perspective. This is not a novel of looking back, even if it uses the past tense. Each scene, each thought, is centred on the now, so that by the time Patrick realises what is happening in his family home, it may only just be becoming clear to the reader, also, even though there are signs before that in the narrative, the significance of which Patrick has failed to understand. Rather than beginning with the essential movement of the story, Doyle chooses, instead, to build the world and focus upon the preoccupations of Patrick and his friends. Doyle eschews a traditionally plotted story for an unfolding narrative that entertains with its short scenes and vignettes, only allowing central concerns to emerge as Patrick begins to understand them himself.

As he becomes more fully aware we see Patrick struggling to make sense of the wider world. His father’s newspapers, behind which his father hides from his marriage, declares, ‘World War III Looms Near’. His father tells Patrick about the Arab/Israeli conflict but assures him by explaining how newspapers exaggerate to sell copy. Later, however, Patrick returns to the subject of World War II as he wonders about Hari-Kari, the ritual suicide performed by Japanese soldiers during World War II. Patrick is developing a sense of a wider world beyond the confines of Barrytown, and of conflicts he does not understand. As readers, however, we sense that Doyle is narratively presaging the conflict which will engulf the lives of Patrick’s family.

This growing awareness of the outer world is first sensed by Patrick and his friends with the encroachments of the Corporation Houses. At first, their construction sites provide places where Patrick and his friends may play. But their emergence is also the harbinger of change. “Our territory was getting smaller,” Patrick twice observes as the labyrinth of new houses takes over their land. Donnelly’s farm, where the kids used to play and get into trouble, is being carved up, piecemeal. The cows have been moved to another property. And Patrick’s growing awareness is cleverly signalled by Doyle through the games the children play. Patrick, interested in facts and learning, is fascinated by the story of the American Indians and the story of Geronimo, and he is able to make a connection between the plight of American Indians and the social changes affecting their own lives. He is also interested in the story of Daniel Boone and calls him a “Good man” and “one of the greatest American pioneers”, but his heart is with the Indians. As the Corporation Houses take over, Patrick observes their impact: “There were no farms left. Our pitch was gone,” and he identifies the new people as “another tribe”. Play is no longer just play, but a symbol of the struggle of the dispossessed. Patrick’s language begins to more stridently identify with the plight of American Indians: “Our territory was being taken from us but we were fighting back. We played Indians and Cowboys now, not Cowboys and Indians.”

This is an effective narrative strategy used by Doyle throughout the novel: associating one issue with another to create parallels within the story. Doyle also makes associations between characters and historical figures for the same effect. An early hint of the conflict between Patrick’s parents occurs when his interest in a religious figure, Father Damien, becomes obsessive. Patrick is inspired by the story of Father Damien, who selflessly enters a leper colony to minister to the sick, knowing he will likely also catch leprosy. Patrick expresses a desire to also be a missionary, and expects his father to shake his hands when he hears of his noble calling. Instead, his father turns upon his mother, angry that she has been “encouraging this rubbish”. As readers we sense the tension over religion in the house. But it is not all bad for Patrick, at least as he understands it. Later, when his father teaches him a Hank Williams song on a Sunday afternoon, Patrick is happy to be connecting with his father. But as readers we understand the point behind his father’s teaching him a secular song on a Sunday afternoon after church: this is just a more subtle extension of the conflict between him and his wife.

Patrick and Sinbad’s slow realisation of the reality of their parent’s lives and their own powerlessness is one of the most affecting aspects of this novel. Sinbad withdraws emotionally, while Patrick helplessly stays awake all night or listens obsessively to his parents’ talk, naively hoping that his own awareness of their conversation or his presence will somehow change things.

There is poignancy in a simple question asked by Patrick as he reflects upon not only his parents’ but also his own relationships: “Why did people not like each other?” Patrick is never sure why his parents’ relationship is in difficulty – he can find no objective reason he understands – nor does he completely understand the shifting alliances and loyalties of the school yard as kids from the Corporation houses join the school.

Patrick is able to determine objectively – he thinks – that his mother is the best mother in the neighbourhood. Yet he also desires to understand why his father thinks and acts as he does. I think this is an important aspect of the novel. Hennessey, Patrick’s teacher, inflicts casual violence on his students, is lazy and possibly incompetent. Nevertheless, we see him engage with his students in the playground when he plays handball with them. And when Patrick’s friend, Liam, defecates in his pants, he shows kindness by taking the boy and cleaning him up, himself. Hennessey is also a father figure, and forms a parallel with Patrick’s father, just as world conflicts also form parallels with the local in the novel. Each man is flawed but not irredeemable.

This is why Paddy Clarke Ha Ha Ha is more than just a novel of nostalgia or a well-pieced together series of scenes about growing up. Clarke’s narrative is working on several levels at once. It references contemporary and historical stories of dispossession, but it is also exploring the impact of social change on the Irish working class. Yet the concerns of the novel are not parochial. Doyle’s description of childhood, of social change and the pressures placed on friendship and marriages as a result, clearly has a wider application. Added to this, it is a highly entertaining – I would say at time outrageously funny – book. It is relatable and highly readable. But it is also a subtle, skilful study in growing up and the difficulties of living together. Highly recommended. 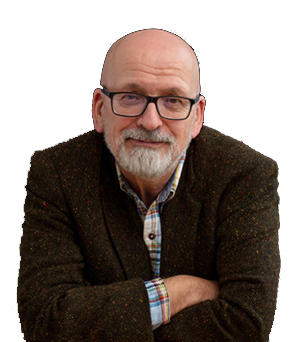 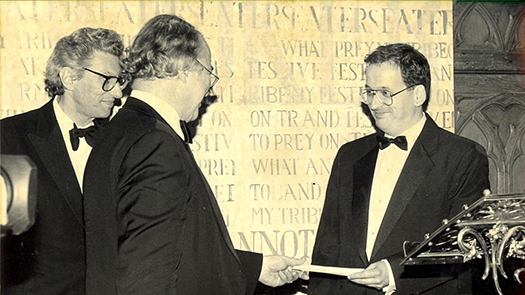 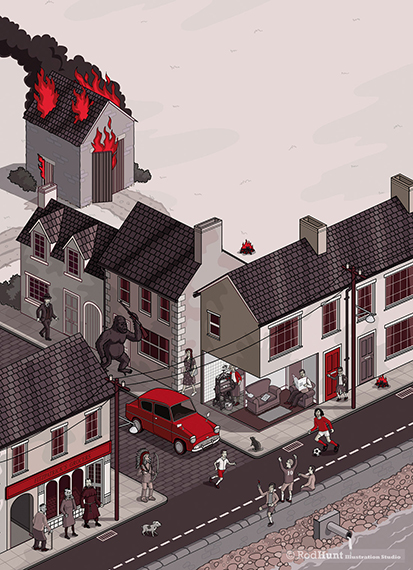 Book Cover by Rob Hunt
Rod Hunt was commissioned by publisher Random House to illustrate the book cover for the Vintage reissue of Paddy Clarke Ha Ha Ha. This wonderful cover features a few details from the book, like the armed ‘gorilla’ of Patrick’s imagination, the burning of the Donnelly farm barn, Patrick’s father reading the newspaper, as well as his mother's ‘mangle’, her old fashioned washer. 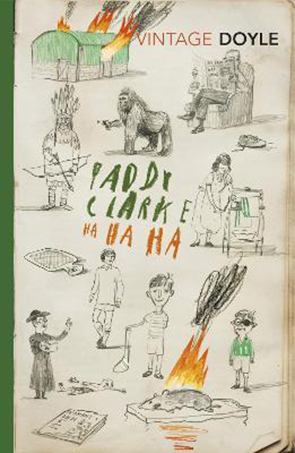 Vintage Cover
Vintage republished Paddy Clarke Ha Ha Ha in 2010 with this cover. Like Rod Hunt’s cover, this Vintage cover focuses on elements from the story, like the burning of the Donnelly farm barn, Indians, the imagined gorilla, Patrick’s father reading the newspaper, and an ill-fated rat.