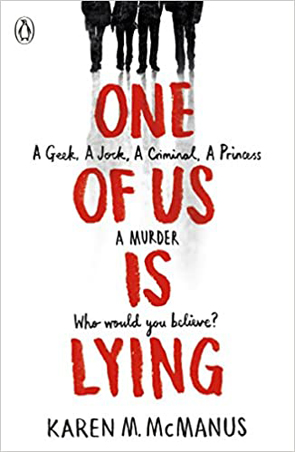 One of Us is Lying
Karen McManus
Toriaz

She's a princess and you're a jock, he says. He thrusts his chin toward Bronwyn, then at Nate. And you're a brain. And you're a criminal. You're all walking teen-movie stereotypes.

One of Us is Lying is a different take on a murder mystery, crossing the crime genre with The Breakfast Club to give us a young adult locked-room mystery. Five high school students are in detention: Bronwyn, Yale hopeful; Cooper, sports star; Nate, drug dealer; Addy, prom queen and Simon, creator of a notorious gossip app. Simon ends up dead and the other four are the only suspects in his murder.

The story is told from four points of view, those of the four surviving students. So rather than an omnipotent detective putting the story together, we get it from viewpoint of each of the suspects, and have no way of knowing which of them might be an unreliable narrator, or if indeed, they all are. Each of the four characters is a stereotype, but they are still appealing characters and we gradually learn there is a little more to each of them than we initially think. Some characters and their stories are more appealing than others. Addy's development was my favourite story arc, with her managing to break free from a controlling relationship and her mother's unhealthy influence, and the developing relationship she has with her sister. I didn't like all the slut-shaming that was associated with her character, but would say it was probably typical for her age group and the high school group she belonged to, even if unfair. I say unfair because Addy has a single fling one night when drunk and is punished heavily for it, while a male character carries on a long term emotional and physical relationship with one person while publicly dating another and this hardly rates a mention. Extremely unfair, but I would say a fair reflection of high school morality.

This book was lightweight fluff, but it was engaging fluff, and a very quick read. It was also a good mystery, with the clues coming out slowly. The author played fair and gave us the necessary clues. I did pick up on most of the clues and the secrets the four suspects didn't want to come out, and figured out basically where the mystery was going, although I didn't pick the entire scenario. As is typical with a locked room mystery, there was a twist to the circumstances that changed how everything could be viewed once revealed. The twist here surprised and shocked me. What happened seemed at first to be an over-reaction to the situation that caused it, but in retrospect was not out of character for the person concerned, and there were a few hints earlier that this character was the type to over-react.

This was very much a young adult novel, and much of the dialogue was clichéd. There was some dark subject matter, such as teen depression, but this was only lightly touched upon, and in a fairly superficial way. The story made good use of social media, and showed a problem facing modern teenagers today where every mistake they make is likely to be captured for all time on social media and widely distributed to everyone they know. Overall a fun read. It should appeal to its teenage audience and I'm sure many would enjoy it if they wanted some lightweight escapism. 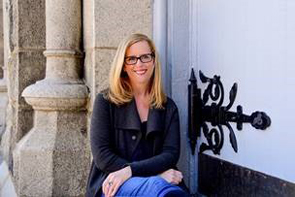 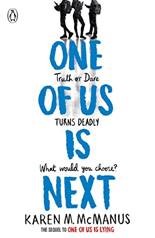