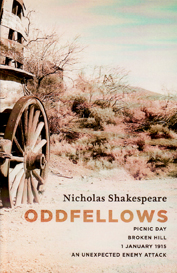 Oddfellows was an interesting insight into a footnote in Australian history. While men joined to fight against the Turks half a world away during the first world war, Broken Hill experienced what is likely to be one of Australia’s earliest occurrences of terrorism provoked by the discriminatory practices of the time, along with the political background of the war.

Shakespeare achieves a succinct style that is balanced between fictional narrative and historical reporting. As he admits in his afterword, his representation of the main characters is necessarily imagined. Little is known about Gül Mehmet and Molla Abdullah who undertook the attack on a New Year’s Day party, and later held out against a considerable force on the outskirts of Broken Hill.

What is interesting is the way Shakespeare has represented this conflict, both from the point of view of the two Arabic men, as well as Rosalind Filwell, who becomes enamoured with Gül in preference to the parochialism of the white Australian men, particularly Oliver Goodmore. The society of Broken Hill reflects the racism and xenophobia of an earlier period, particularly in the firebrand figure of Ralph Axtell who speaks against the Afghan population, and Clarence Dowter, whose over-zealous persecution of Abdullah precipitates the conflict. However, contemporary social and political debates are resonant in the story as well. Conflicts inflamed by concerns about immigration, extremist religious fundamentalism and terrorism have only been exacerbated in the last hundred years, and the value of the book is in how it portrays these simple differences and lack of empathy as being the catalyst for these conflicts.

Gül wishes to fit into Australian society, but attitudes are against him. So, too, does Molla Abdullah, but the system is against him. However, Shakespeare takes pains not to make light of Gül and Abdullah’s crime – indeed, when it happens it is shocking – but also wishes to portray them as human beings. This is a balanced narrative that allows the reader sympathetic access to both sides in this conflict. Sally Khan, a white woman who has married Badsha, an Afghan man and lives between two worlds, is a vehicle for this insight, as is Rosalind and her experience.