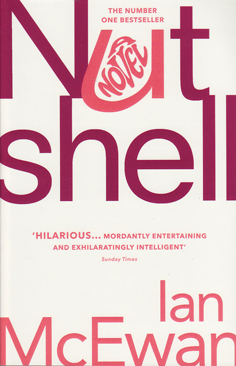 Ian McEwan’s Nutshell is a strange kind of crime novel. Not a whodunnit. Rather, we watch the circumstances of the crime unfold from the perspective of an unnamed, unborn baby. The story is loosely based on Shakespeare’s Hamlet. Our narrator’s mother, Trudy (like Hamlet’s Gertrude) and her lover, Claude (as in Hamlet’s Claudius) conspire to kill our little nutshell’s father, John, a poet and brother to (you guessed it) Claude. McEwan signals the parallels with Shakespeare’s play in an epigraph, a well-known line from Hamlet: Oh God, I could be bounded in a nutshell and count myself a king of infinite space – were it not that I had bad dreams. From this thought McEwan fashions his literal nutshell, the womb through which the narrator provides our perspective of events, as well as a perspective of our world and all its attendant problems.

Of course, a story like this requires a great deal of the willing suspension of disbelief. Not only is our narrator cognisant of his surroundings, he has a sophisticated grasp of adult relationships, an understanding or world politics and a cultural knowledge that well outstrips most adults. But let’s put these thoughts aside. Our nutshell’s ‘outlook’ to unfolding events provides some funny moments; in fact, some rather uncomfortable moments (Claude is tunnelling towards me…) when you factor in the rather awkward mechanics of sex in this situation.

Of course, McEwan doesn’t expect his reader to take his narrator too literally. His Hamlet, in a nutshell, is a conceit. Nutshell-Hamlet is something of an autodidact, learning about the world through what he hears, and what he hears at night is his mother’s taped lectures about the state of the world: its politics, famines and environmental degradation. If Shakespeare’s play represents the flourishing of the creative and intellectual works of the Renaissance, McEwan’s story positions itself at the dusk in the Age of Reason. We were wonderful, but now we are doomed. Our nutshell-Hamlet is like a metaphor for modern sensibilities. The disasters that plague the modern world, intones the lecturer of Trudy’s tape, …are the work of our twin natures. Clever and infantile.

This, of course, provides another contrast to McEwan’s source. While Hamlet may struggle with depression, his conflicted feelings for his mother and his desire for revenge, he also engages in lofty perorations concerning human existence. Nutshell-Hamlet, on the other hand, is mired in the physicality of his mother: her smells, the semen from her sex, her urine and shit; in the baseness of a humanity that cannot transcend its own infantile self.

The character of Claude serves to highlight this difference from the original play. Shakespeare created a villain, but Claudius was not as villainous as his Iago. Unlike Iago, we see something of Claudius’s mind throughout the play, especially in the prayer scene where he struggles with the weight of his own guilt. The sight of him praying is enough to stay Hamlet’s revengeful hand for a moment. Claude, however, does not have this same humanity. Claude has taken his brother’s sister for a lover and is clearly motivated by the wealth he will accrue from the sale of his brother’s house. His motivations never deviate and we are never given insight into his soul. In fact, he is quite insensitive to Trudy when he should be supportive. He is predatory and self-serving. There is nothing to redeem him. As if to highlight his failings, his brother is a poet and a publisher of poets. There is poetry in John’s soul, whereas there is none in Claude’s inarticulate rumblings.

So, nutshell-Hamlet represents a little of humanity in a nutshell. Its canvas is narrow and domestic, but brief chinks from the outer world are also glimpsed to reveal a rotten Denmark, not just a rotten throne. If Hamlet was a play born from liberal Humanism, McEwan’s work is almost reactionary against liberal bleeding hearts. There is little to ennoble here. The principled ideal of Equity is bastardised. The crime committed in this story isn’t so much a murder, as moral relativism. Nutshell Hamlet, begins a kind of soliloquy with ruminations about his own sex:

I’ve remembered rumours of a new dispensation of blue and pink. Be careful what you wish for. Here’s a new politics in university life. This digression may seem unimportant, but I intend to apply it as soon as I can … A strange mood has seized the almost-educated young. They’re on the march, angry at times, but mostly needful, longing for authority’s blessing, it’s validation of their chosen identities. The decline of the West in new guise perhaps. Or the exaltation and liberation of the self. A social-media site famously proposes seventy-one gender options – neitrois, two spirit, bigender, any colour you like, Mr Ford. Biology is not destiny after all, and there’s cause for celebration. A shrimp [penis] is neither limiting nor stable. I declare my undeniable feeling for who I am. If I turn out to be white, I may identify as black. And vice versa…

Given the situation of the unborn protagonist, heir to the biology of a criminally conspiring mother, and a duplicitous family, denying the tenets of biological determinism would seem laudatory. However, we should be mindful of those words: almost-educated young. There is a barb here. Nutshell-Hamlet’s thoughts are prologue to his mother’s negated guilt:

Her status as a murderer is a fact, an item in the world outside herself. But that’s old thinking. She affirms, she identifies as innocent. Even as she strains to clean up traces in the kitchen, she feels blameless and therefore is – almost.

It’s a mental trick that exculpates not at the level of cultural or historical relativity, but via a moral relativism licensed at the extremes of modern liberalism; targeting, one presumes, McEwan’s audience, itself.

McEwan’s narrator alludes to Marvel’s ‘The Garden’, (The womb, or this womb, isn’t such a bad place, a little like the grave, ‘fine and private’ in one of my father’s favourite poems). It’s an interesting thought to raise, since under Christian doctrine the purity of the prelapsarian state is denied even the child; even the unborn. And I had a thought as I read the book, that if nutshell-Hamlet does not speak the language of a child (what unborn could?) then he certainly speaks the language of his readers: that his perspective, that of the narrator, is necessarily that of the reader, and so is a surrogate for the reader. Like, Nutshell-Hamlet, it seems, we are, without determination, complicit with criminal intent: My vote’s for liberty. The murderers must escape. He is inured to the ways of the world, possessing a heightened access to it, immersed as he is in his mother’s surging hormone’s, seemingly with access to her thoughts, as we are, as readers of the text. To borrow from nutshell-Hamlet, the narrative voice is a complicated amalgam of the clever and infantile.

It was a thought that played at the back of my mind as I read. McEwan takes our own presumed values and reveals them as potentially self-serving, solipsistic and morally degraded. At that level, the book is potentially confronting, even if its characters are somewhat hapless and humorous.

This is a tale told fairly simply, despite its literary antecedents. The voice of the protagonist is presumably meant to be close to that of his reader’s, despite his unborn state. It’s this perspective, grim in its situation, humorous in its perspective and entirely novel, that makes the story an interesting read and justifies the retelling. It’s a kind of crime novel as well as a modern allegory. An interesting read.